Alt title: Gurren Lagann Movie 2: The Lights in the Sky Are Stars 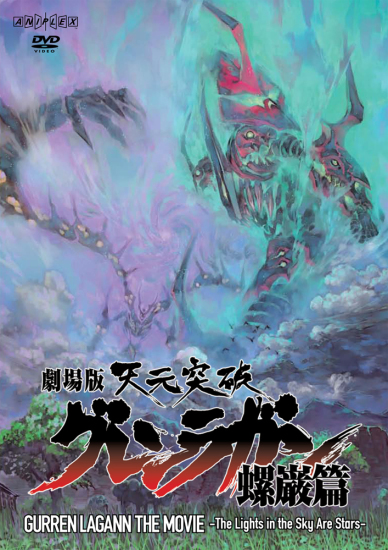 The second of the two movies which retell the story of Tengen Toppa Gurren Lagann.

My only problem with the movie is that it was never dubbed, seeing as I much prefer the English voices to the Japanese ones, but that's more of a personal issue.

If you've already seen Gurren Lagann, you may be wondering why you should watch this. One answer is because of the way the final fight is handled in this movie. I don't want to give anything away...but my goodness, you don't know how pure epic the ending of this one is compared to the original anime. You may have thought that upon the completion of Tengen Toppa Gurren Lagann, you learned the true meaning of badass, but it just cannot compare. All that and the epilogue is a little more clarified and specific to Simon.

And that's a pretty crazy thing to suggest, isn't it?

That and the new additions to the soundtrack are great. Another sort of genre-breaking song that is most easily described as "rap" (but that wouldn't be too accurate) is present in this movie. That and the BEST version of the opening is played during the final fight.

So if Tengen Toppa Gurren Lagann blew your mind, this is something you MUST WATCH.

I had the chance to actually see the movie premier in San Francisco Japantown and it was a mind blowing experience. The story basically covers the 2nd half of Gurren Lagann and Gainax was kind enough to put in a lot of new things in the movie (thats for you to watch out for) and if you haven't seen Gurren Lagann or Gurren-Hen then why are you watching Lagann-Hen??? ANYWAY!!! Overall the story was basically the same(no drastic changes to the story). The animation was beautiful!!! colors filled the screen as Simon and Team Dai Gurren battle the Anti Spiral. Gainax always brings the best. The sound... J-Pop blasting during epic Ganmen explosions and when you hear "ROW ROW FIGHT DAH POWAH!!!" you want to scream as well right??? Gurren Lagann was all about the characters. Now in Lagann-Hen, there is a twist that i won't spoil but the characters will bring the most epic battle you have ever seen. I have been a big fan of Gurren Lagann for a really long time and i love the series to death. Gurren Lagann will be an anime that everyone will be talking about in the future.