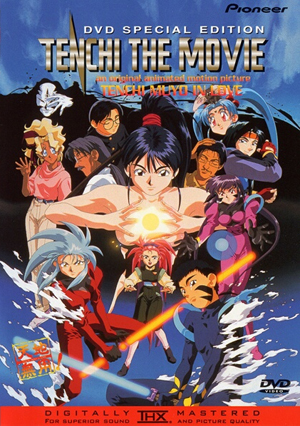 This rather interesting plot point comes from a very unlikely candidate in the first installment of the Tenchi movie franchise, following the storyline of the Tenchi Universe progression compared to the original OVAs.  The story has Tenchi, Ryoko, Ayeka, Sasami, Ryo-ohki, Mihoshi, Kiyone, Sasami, and Washu traveling back in the past to avert a pending tragedy: Tenchi's disappearance. The collective aim of the gang is to stop a time-jumping criminal named Kain who tries to destroy Achika, Tenchi's mother, in the year 1970.

It has some of the same brand of situational humor as the series in places, but what I appreciated was that this movie was a bit more mature (only slightly-it's not quite as heavy as Tenchi Forever) and had better focus toward the characters than even the derived series did....which says a lot about the movie covering more even in its time limitations.  I actually consider this to be a nice take on the series because it provides some needed backstory about Tenchi's family and his link as a descendant of Jurai.

The main problem with Tenchi in Love?  The plot takes its time working up the conflict, but at the same time, you get a glimpse of how Nobiyuki, Tenchi's usually perverse father, was as a young man and how his relationship with Achika developed.  For me, this was certainly satisfying and I liked the attention the series paid to not only developing them, but also working in some of the antics, comments, and reactions of the gang into knowing a bit more about this background. The movie itself combines elements of sci-fi, romance, action, bits of comedy and drama, something that former fans of the Tenchi franchise would enjoy, but also audiences who are looking for that in a movie which does a decent enough job handling all of the above.  Unlike some of the flaws of the TV series (especially Tenchi in Tokyo and Tenchi GXP), the movie does a good job of flowing together and it's never just one thing happening without some sort of tangibility. The true action sequences don't really come until a good way into the movie, so those who are looking for action throughout the movie may be somewhat disappointed, but I found all the elements rather well progressed in retrospect.

I think the movie would have been even better if it explored the psychology of Kain's actions and developed him more as a villain - he's certainly one of power and his VA work was quite good, but the story does come across as a typical "good vs. evil" motif and that may leave some of the viewers wanting more from it, but one thing to consider: none of the Tenchi installments are incredibly detailed or deeply rooted, not as much as peer series that take on the sci-fi standard.  If anything, it's one of the better movies based on a traditional harem series I've seen to date, and it flows progressively better, though arguably, than the other Tenchi movies.

If you're a fan of the Tenchi series, I would definitely recommend this movie, but I'd be a little hesitant to recommend it if you aren't familiar with this series at all, and recommend at least watching Universe to have a more direct handle on what this series offers.

This is actualy one of the better adapted movies for the Tenchi Franchise considering its time (1997).  I was actually surprised because the production values and animation cels are actually better than some series made in the same time and even in latter years.  Probably the best adaptation I've seen when considering the character designs of the Tenchi franchise, with respect to consistency and quality. Action sequences are fluid and engaging considering its time, and to current standards, it could measure, but not exceed.

The Tenchi Muyo franchise is actually one of the few anime series where I actually prefer the dub over the original - it's very well adapted for all of the characters involved, and the VAs do an excellent job of getting into their character's shells, for better or worse (Mihoshi's VA actually always drove me up the wall, but then again, that's her ditzy character).  I think that both the original and dub were well adapted for Tenchi in Love. Some might recognize Megumi Hayashibara right off the bat from the original as Achika, a role I felt she filled well. In the dub, I have to give a hat off to Matt Miller, who plays Tenchi. He does such a good job of getting into character, and I'll expand more as to why when I get into the character section.

The soundtrack of Tenchi in Love is among my favorite anime soundtracks in general-primarily because of the nice instrumental music. Achika's Theme is beautiful and definitely one of my favorite pieces in the movie. I would say all of the instrumental pieces excel in this movie for creating the mood, and could potentially have stand alone value.  Now I'm actually on the fence about the ending vocal of the movie, "Alchemy of Love." I was never the biggest fan of the song in general: Megumi Hayashibara's version or the remake by Nina Hagen and Rick Jude. The lyrics in both versions are very well crafted, even romantic and beautiful, and the instrumental build up is very well done,  but vocally, I don't know if I made as much of a connection in retrospect. Hayashibara-san's version is a J-pop ballad, while Nina Hagen and Rick Jude's version comes across as more of a power rock ballad, with soaring vocals (on both artists' parts). If I had to take the bait, I'd go with Hagen and Jude's version for nostalgic sake.

The characters in Tenchi in Love do follow a cookie cutter formula, something to be noted in any harem or harem-based series.  Tenchi actually makes a decent lead, even as a harem male. He's meek and well-mannered, but never too cowardly or just ends up with power that falls into his hands. One of the reasons why I said that Matt Miller did a great job with his role is because he really gets into Tenchi both in conflict and also when he steps up to the plate to try to save Achika and his father. And his comedic timing isn't too shabby to boot.

Now for the girls: you'd expect the typical harem stereotypes to prevail: Ryoko the energetic and sly space pirate, Ayeka the haughty princess, the "kawaii" Sasami, Mihoshi the dumb ditzy blonde, Kiyone the voice of reason (to counterbalance Mihoshi since they're space partners-and this is explained in the movie as well as the series), Washu the scientific genius, and Ryo-ohki....who comes across as the kawaii pet.  And while this movie doesn't really do much to stretch them beyond those stereotypes, it actually doesn't do a bad job of handling them in the movie's premise, and it does give them a chance to develop in the scheme of helping to save Tenchi's life and family.

I enjoyed this movie a lot for watching the development of Nobiyuki and Achika. It was a needed expansion for me coming into the movie from the series, and I liked the way the movie handled their characters. Sure, some of the parts come across as a bit cheesy, but it's tolerable, and even cute.

I'd recommend Tenchi Muyo in Love certainly to anyone, as mentioned, who loves the original series or the franchise in general.  Those who come into the movie without the background may find their footing a bit loose with the movie, but if you want a film with a good mix of the genres mentioned without too much expansion, it's worth looking into.

Good. I always preferred the humor and character interactions in this series over the action. Too bad that this was mostly action. Still, it was pretty enjoyable.

Having not watched any other part of this franchise, jumping into this movie was surprisingly easy. Its in-your-face 90s style and soundtrack (<not outstanding by any means) enhanced the sci-fi factors immensely. Minor warning: tons of flashing lasers, do not watch in the dark with a bright phone screen - I felt like I was going to have a seizure, many times...

Characters were quite stereotypical (tech guru, competivie aggressive girl, cute little kid who is probably 100 years old?) but likeable nonetheless. Having just met this cast for the first time, I still felt worry for Tenchi as the threat of his disappearance kept representing itself. Working under a time limit at the end of which you'll cease to exist was thrilling to watch! Action and spying are key in this movie, and goinging back in time to see your parents in high school was neat.

Overall, I felt thouroughly engaged but never blown away. A great watch and worth exploring if ever in a sci-fi mood!