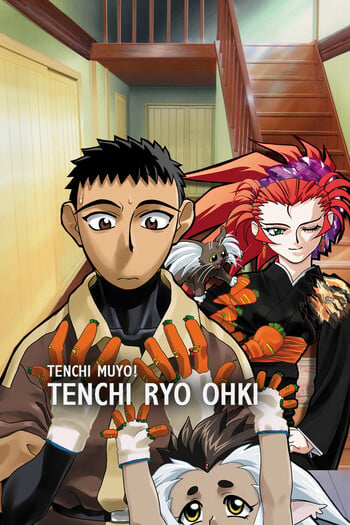 What I liked the most about the show is the characters. In most harem animes, I would rate characters very low, but this show is different. A few times I would start watching the show, and forget to set the language to Japanese. I'm then horrified by some of the worse dubs I've ever heard. Okay, they aren't the worst dubs. I hate them just as much as 90% of the dubs I've come across. That's okay though because the Japanese voice actors do a great job.

There is a story here, but it just feels added in. This is probably on purpose. The show is more about the interactions with the characters. It is more of a pointless fun show. It is was fun, and I loved it. There are so many spin-offs, remakes, movies etc. That makes me happy, because I don't want the experience to be over.

While I`m biased since I don`t like harem anime, I thought this was a formulaic series with nothing much special going for it. There`s little to be interested at here besides Ryo-ohki, who is a sweet and cute cat-rabbit animal with a personality and the first episode when compared to the rest of the episodes in the series was okay. This also had some good music, though I disliked the dub, the actors sounded like they were just reading their lines and Ayeka`s voice sounded too old for her physical age. It started off great and interesting until Ryoko came along. I was interested in what will happen next but once that grouch Ryoko came up, the series started dropping the ball more and more. There is not much of a plot here and all it focuses on is silly comedy and melodrama.

Why is everyone all gaga for Tenchi? He`s a bland average Joe character, he`s not that cute or handsome, he is whiny, dense, and an all-around forgettable character. Sure he had an interesting story in the first episode but character-wise, he`s iffy.

The animation and designs show their age. Tenchi is supposed to be the guy the girls are hot for, yet he`s not even that hot, he just looks like a boring everyman character. A lot of the animation is excessively goofy and there is a lot of exaggerated facial expressions for the sake of comedy, which I blame the decade it came out in for. I know that it fits the style of the show but I`ve seen some anime that came out around that time that had less stupidly poor goofy animation.

Aside from the space element, action, and a little mystery, it`s not much different from your average harem anime. It`s disappointing because there could`ve been more plot and for a series revolving around a bunch of quirky girls living with a guy, I was appalled by how much drama and crying there is in this show. It can jump from being a romantic sitcom to a space opera melodrama and it just didn`t mix well. It`s almost like it didn`t know what it wanted to be.

Back to the characters, most of them are just busy fighting over Tenchi and therefore, aren`t that interesting. All of them are either crybabies, dense, bratty or all of the above. Sasami is the nicest one out of the whole cast but even she turned out to be a Mary-Sue with her overly friendly attitude she has towards everyone. There was even one episode where she was crying over Mihoshi leaving but from what I`ve seen, they don`t interact that much, they`re not that close so why is she having such strong feelings about her leaving? She`s like what, 6-9? And she cries too often in the series!

This series is so overrated and I don't get the appeal of it. Watch something better like Wreck it Ralph or Road to Avonlea.