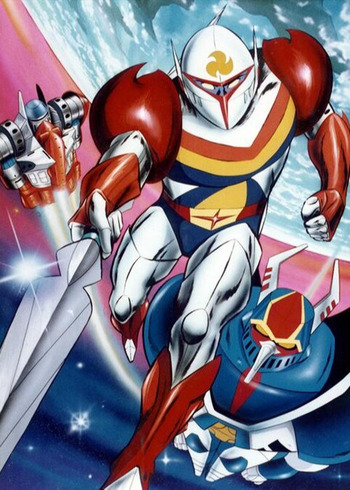 Unfortunately, this series was not a success and was canceled half way, which was a huge pity. Even though this series may not have lived up to Tatsunoko’s other works such as Gatchaman and Casshan, I felt it had its own potential, which it couldn’t fulfill in the end. Granted Tekkaman Blade was a success, but it doesn’t make up for what Tekkaman could have been because like I said in that review, I feel you can’t compare these two series.

But moving on, I like how this anime approaches racism in its own subliminal approach. As a result of the waldusters killing Jyoji’s father, he is racist towards all aliens and this caused some tension with Andro for awhile, and there is this one episode where Jyoji does accidentally kill a peaceful alien race and attacks them just because their ship was alien. So his hot headedness is unique in its own way and was relevant to the times. The Pegas of this series I’ll have to say I liked more than the one in Blade. In Blade, I felt he really didn’t stand out too much, but in this series, he has more presence and more usage than just for riding and transforming though Pegas will have major time to shine in Bladeat the right time. But anyway, I’m going to get more into some of the bad points at the overall conclusion.

Yes, the art is old and outdated, but age shouldn’t equal bad. But it personally doesn’t bother me since I’m an old school anime fan. I don’t recall what year it takes place in, but it looks like in this future, rainbow color clothing and afros and 1970s fads are back in fashion, but of course this anime was made in 1975 and the approach is nothing more than an accurate depiction of that. But I don’t know how to speak of Jyoji’s hair style except that it’s ghetto fabulous. You can’t even get away with that kind of hair in today’s anime. It is ridiculous, but I have to admit it does stand out in a ghetto fabulous way. And if you diss Andro’s fro, then you got to go. But the clothing is of course pretty retro in itself, skin tight and multi-colored.

What I really liked most about the original Tekkaman in its design is the diversity of the villains. You get all kinds of designs such as wombats, a human sized bug, lava and ice monsters and many others. It’s not exclusive to giant space spiders like in Blade. The villains with their gimmicks have more of a lively personality with this approach. Though their antics are a bit campy with their clumsiness in a Jim Carrey like way, it’s pretty cool.

And I have to say with the design of the original Tekkaman itself, I guess Space Knight is an appropriate moniker since he looks like a European Knight except with a rainbow chest plate. Then again, Robin Williams wore rainbow suspenders in Mork and Mindy. So I’m guessing Rainbow colors was also fashionable in 1970s Japan as well. The design of Pegas looks a whole lot like Tetsujin 28 or Gigantor. Just looking at it perfectly explains that. But I guess the significant different of the designs of this series and in Blade truly contrasts the major evolution mech anime has gone through between the release of the original and Blade.

And to conclude this part of the review, the action is pretty exciting and fast paced, but not of course as acrobatic as it is in Blade, and I felt the fights were a little too one sided. Granted there are ways to hurt Tekkaman, but he instantly recovers and even when he can’t hurt an enemy, he instantly finds alternatives in a second. And it’s pretty much te only thing that can hurt and kill Tekkaman, is Tekkaman himself. And the voltekka of this anime is pretty ghetto itself. Try to imagine a small scale version of the S logo attack from the 2nd Superman movie, and that’s the voltekka of this anime.

This anime also has some respectable names of not just the 1970s, but of all times as well. Jyoji is played by the Casey Kasem of Japan, Mori Katsuji, who has also voiced Garma in Gundam, Nephlyte in Sailor Moon, and the voice of Go Hibiki, the original Japanese name of Speed Racer, and he has recently reprised the role of Tekkaman in Tatsunoko vs Capcom. He really brings out his quick tempered and arrogant nature to the character, but makes him passionate when appropriate. Another respectable name is Yamada Yasuo, the original voice of Lupin as the voice of Andro, the extraterrestrial afro man. Try to imagine a serious guy with a sarcastic and easygoing portrayal and you got Andro. I would go on, but I need to keep this a bit shorter today.

Since this anime was canceled halfway through, it pretty much ends on a cliffhanger, but the way it was presented, it made you think it’s the official ending as well. But despite this, so much was sacrificed to really fulfill the potential I believed it had such as the development of Jyoji’s and Hiromi’s relationship. They did have descent chemistry and most of the time, Hiromi was Jyoji’s foil. Pretty much the relationship they share in this anime is no different from the one Amuro has with Frau in the original Gundam series. Jyoji was starting to develop more progressively at the time and new features and consequences of Tekkaman were starting to be revealed and I felt the extensions were starting to be played out, but not fully.

Also being unable to have concluded is Andro and Muta going back to their home planet in peace. When you get to the second half, you get to see more of Andro’s serious side and how he longs to go back home, but unfortunately, that’s never played out. And you never seen the main villain killed. So a lot is left in ambiguity overall.

But the sad truth is, it’s not getting a continuation. I’m guessing some people in Japan felt Tekkaman didn’t live up to Gatchaman, which was why it probably tanked and I’ll admit I don’t blame them, but I do feel sorry that Tatsunoko had to have this piece of work go to waste. And the good qualities along with the potential I feel this had.