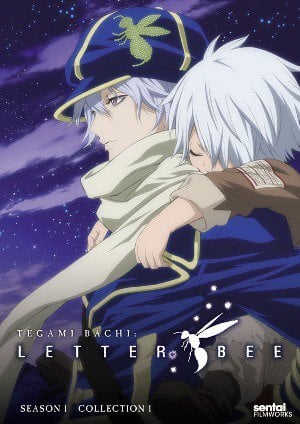 Lag decides to make Niche his dingo officially, and reaches the Yuusari Head Post Office, known as the Bee-Hive. He and another boy named Macky Gee begin the Bee suitability interview examination, which consists of delivering one real letter safely to its destination. Knowing he is delivering a real letter, Lag's determination is strengthened yet again.

The Letter to Jiggy Pepper

On the eve of nobleman Oz Bezarius's fifteenth birthday, he and his loved ones gather to celebrate in a coming-of-age ceremony. But after Oz steps under a long-stopped clock and the hands finally move once more - thus fulfilling a mysterious prophecy - he is violently thrown into the legendary prison known as the Abyss by three cloaked intruders. Existing in...

Both series are about a young boy who has to try and understand a strange world. They both also have to deal with finding and protecting the people they care most about in the world. Both series feature fantasy action with drama and humor, and they are both visually stunning.

Both series have a kind of a mistic feel to them, and leave you with more questions than answers at the end. Also, both sceneries are placed in an imaginary, fictioned world, and characters are also very interesting and simmilar at some points. The story follows a young boy who is strugling to unravell the secrets of his past that have been bothering them for a long time, and both cases have to do with dissapearance of a parent. Along the way, the protagonists of both series meet friends and allies who help them along the way and are always there to support them, offering themselves and their lives to save one another. Two touching stories with a lot of heart in them which you're sure to enjoy all the way, and about which you will be thinking a long time after finishing.

Each of these series revolve around a great number of unknowns and two main characters fighting to get their jobs done. One of the characters in each case being a female familiar-esque fighter and the other being the male contractor of some sort.

Both series are about a boy with powers he is still trying to understand. They are both set in fantastical worlds with their own religion and government, and the main character has to find his way in the world. Both show the friendships and connections necessary in order to make it in the world, and both mix adventure and drama with humor to make an entertaining mix.

Both main characters have a special eye, one in place of an eye and the other in his hand, which gives them unordinary abilities.

Both portray a general dislike for the main government.

The main characters are aided by a non-human friend.

Both are set in a fictional world

Three years after an accident that nearly left him for dead, Tomoharu Natsume is about to start his high school life. Though with a ghost named Misao following him around, Tomoharu is far from being an average teenager. One day a strange woman appears and gives him a trunk that contains a tremendous power. This power is known as an Asura Machina - a being...

Each series is centered mainly around younger kids and supernatural events. Also, each of the main character fight with their familiar. Finally, they each have a final episode that sets up a lot of the next series quite well.

Probably the biggest similarity between the two is that they both feature main characters who tend to rely on other characters in the series to help them out and get them out of trouble.  Though when the time comes they can fight for themselves.  Also at the end of each series they both create a nice setup to lead into the next season.