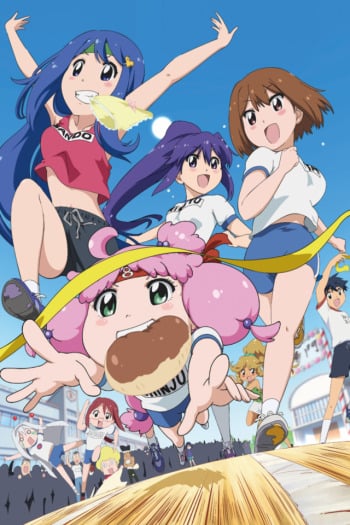 Like Teekyuu, Plastic Nee-san is a really fast-paced comedy which revolves around school girls doing random stuff. It's also quite short and has no plot so if you liked Teekyuu you're definitely going to enjoy Plastic Nee-san.

Play Lucky Star on fast-forward and you have Teekyuu. Both have random comedy and little plot (zero plot in the case of Teekyuu). I think if you enjoyed one you might be interested in the other (Lucky Star is the much better of the two).

Like Teekyuu 8 Pugyuru has plenty of random humor that would make you either go "huh?", laugh, or both at the same time. It might differ in the pace and the setting, but if you want something as random as this show but not so fast-paced then give Pugyuru a try!

Wakame High School has its fair share of weirdos, and transfer student Fumiya "Fuumin" Okometsubu is about to meet the strangest one of all. Planning to make one hundred new friends, the first to step up to the plate is Masaru Hananakajima. Becoming an unwilling student in Masaru's secret martial arts style, the two embark on enrolling more unsuspecting victims to learn the "Sexy Commando" way of fighting. Recruiting Kyasharin, the feeblest strong man in the world; and Kondo, the aspiring manly man; the group embark on a voyage of moronic triviality. From an outrageous sleepover to playing the baseball Game of Honour, the team must finally pull together and remove their pants for the National Sexy Commando Tournament!

Ai, Mai, and Mii belong to the manga research club and have fought off alien invaders as well as rivals in tournaments. But as usual, Ai's the only one actually drawing any manga...