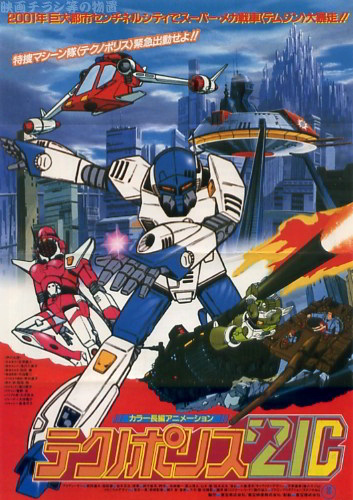 A nice piece of work that feels almost like a pilot to a series that never came to be. It’s about mecha police chasing for hours a super-tank, armed to the teeth, inside a bursting futuristic city and blowing pretty much everything along the way. Of course and it’s very enjoyable!

PRODUCTION VALUES: 7/10
The general feeling of the movie is not good. Dated graphics, generic skyscrapers, one-of-the-same mechas, stock characters, lukewarm voice acting… Uninteresting stuff for most seasoned viewers. Yet, unlike most anime who follow the “stand still and pond about the past in order to drag the battle for another 10 episodes” formula, this movie has a enormous amount of action. Almost non-stop chases, explosions and shoot-outs comprise this movie, even some realism, concerning physics and blast recoils. Nice music action themes come along to boost the feeling of excitement even further. Thus it is a big thumbs up for the action alone.

SCRIPT: 5/10
Sinister criminals steal super-tank, idealistic police officers riding mechas chase after them… That’s it; nothing more. The tank chase is all the focus when it could be a lot more about the man/machine coexistence and cooperation. Still, the huge action scenes and the military schemes in the background are enough to make the story acceptable for its duration and context. It is constantly changing backgrounds and camera angles and offers something light to think about besides things blowing up. The ending is quite sad too and it left room for more missions concerning the leading cast. Some thing that never happened.

CAST: 5/10
All the characters are left undeveloped, and the fact that they look and act pretty generic doesn’t help much. Their mechas are pretty vaguely presented as well when it could delve a lot into their cooperation. Yet, their interactions with the automated tank and their search for secret military plans are enough to make them slightly interesting. The most interesting character end up being the tank’s AI; just notice its reactions and you’ll see what I mean.

LEGACY: 1/10
Not much. It has interesting concept but it is still just a stand-alone action movie with undeveloped characters and unexploited potential. Ghost in the Shell has done wonders in a similar manner and practically overshadows this one, even if it lacks the cool action. Heck, it even has a much similar episode with an AI tank!