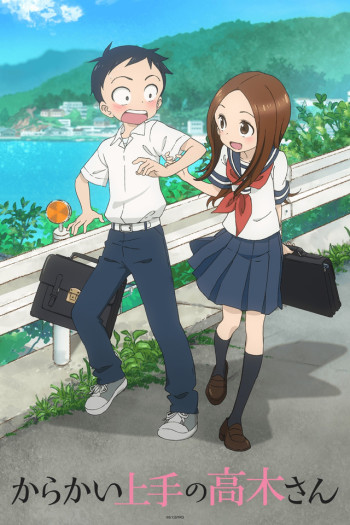 At first looks like a treasure, but soon the story becomes really boring, the same jokes repeat endlessly. The guy is an idiot, I don't really know who the girl in the série because the protagonist is an incarned shame. The girl, Takagi, every time is puting her beloved idiot down, even in things that he has proud of. And all Anime is it:  Every episode is like the same. The only salvation are the three funny girls. I don't see the funny in a schizophrenic guy who can't even think correctly.

Good animation and design, however Just cuteness is not enough to produce a good show.

This anime is the "what happens when 2 young high school students like each other" scenario, along with lots of foreheads taking up the screen. It is pretty episode based with each episode divided into 3-4 small skits lasting around 5 mins each, the main variation being the locations or activity. It starts out amusing for an episode or 2, but once you realize that what happens in episode 1 is what you get for episode 2-12, the enjoyment decreases and things get rather repetitive. It's all about the girl teasing the guy, and the guy overthinking everything in an attempt to get back at her. It's cute at first, but just wears your patience as everything becomes really predictable. This makes it get less funny and more annoying, like when you use or do something too often, it gets stale.

In terms of story or progression between the characters, there really isn't much. The actions between the duo don't go anywhere exciting, not even in episode 12. Maybe it's left off like this for a possible season 2, but we don't really need another 12 episodes of this. Either way, it's just the same thing over and over under different scenarios such as at school, park, swimming, biking, etc. There is a trio of girls that get a few of their own scenes, but they really aren't interesting or shown enough to where they have much of an impact in any way.

There isn't much else to say, it's just the same thing over and over. The charm and comedy of it loses its appeal more with each episode and watching the guy overthink things constantly just drags things out when you know exactly how it will turn out. It might be more enjoyable for younger viewers, but as an adult it just kind of makes you roll your eyes as you now know better and don't play these games anymore. Putting on a romance element or progressing their interest in one another is what is missing to keep it appealing in the long run.

Overall, it's watchable if you view 1-2 episodes a week, not something you would watch several episodes of at once. The excitement wears off quick and if you are older, you may not find much interest in the comedy as it comes off aimed at the far younger viewers. It is important to know that what you see in episode 1 & 2 is what you get from 3 - 12, so if you aren't into it then, don't bother with the rest.

If you would need to summarise this anime in one word it would be 'cute'. Unfortunately its also kind of bland - even if I liked it quite a bit.

So let's start with the most important part - the story!

It's as bland and as repetitive as it gets. Boy and Girl go to school. Boy has a crush on the Girl but pretends he does not. The girl probably knows it. The twist is: she loves to tease him. Repeat.

This is actually quite decent. Sure, the characters have a child like characteristics to them (which might not be Your thing) but still, the animation is good.

Finally, we have the characters which is where this anime shines. Don't get me wrong: they're not very original or over the top but they do feel ... real. Like the storyteller writes about his/her childhood. Which is very fun and elevates the material. Even if the story is pretty bland you WANT to see what's next because you like the two main characters. Side characters are pretty one-dimensional but they serve their purpose and don't really need to be fleshed out in a simple story like this one.

Verdict: It's ok.  Pretty decent even. Go watch it already!

It's cute I guess, but holy hell does it get boring in a hurry. Every situation is set up the same way with smug girl teasing the boy and the boy doing everything he can to not be teased (which makes it easier for her to do).

It's pretty clear early on that she actually likes him, but so what? They're too young for it to be a relatable or believable love story, though even if he did start to like her, it would feel like Stockholm sydrome given that she's basically bullying him and has no actual personality or redeeming features that showed in the first few episodes.

Maybe there's more substance later, but that seems unlikely (and it's not worth my time to get that far anyway).

Well here is the deal:

-The characters should interact more, it looks like only 1 could be a winner, the rest are born being slaves...

-The animation is incredible

-The audio is uh, in ol' Toradora there was a song that will make you cri when you hear it (I know this is not a romance anime but at least a memorable song that's not the opening)

-The story should be more spicy

Well if the animators want to get real rich they need to add some more tension, 99% takagi wins and even when she does everyone is DUDE HOW SHE DID THAT MAGIKAL POWHERS???, less magic and more thinking @Takagi_san.

Also (they) need to add how takagi's home looks like, their life, and as much info about 'em. We just assume that Takagi lives in another universe and teleports to (((tease_them_all.universe))) then goes back; The wheel should spin and the guy muST WIN MORE TIMES.