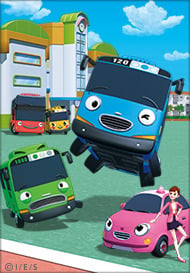 When Bella finds out that all the toys were not forgotten and was touched by Ace and Duri's friendship, she decides to help other toys to find their friends(owners) back. But, it seems that Louie isn't the lucky one to find his old friend, Kevin. Tayo and Lani decide to help Louie to find Kevin but there are adventures that they never thought of!

While investigating a string of mysterious car accidents, Dr. Franklin Char is abducted by the perpetrators. This incident activates his creations called "Tobots", cars that transform into robots with a special key called a "Tokey". Dr. Char's first two Tobots, Tobot X and Tobot Y, are entrusted to his twin sons Ryan and Kory, respectively, to fight crime and protect their neighborhood.

When disaster strikes in Brooms Town, police car Robocar Poli, fire truck Robotruck Roy and their friends on the rescue team race to save the day.

In the near future, high-tech AI toy cars for kids, Watch-Cars, are created. In burst enthusiasm, a battle tournament is formed, the Watch Car Battle League. As the undefeated champion, Kai remains a legend. Jino and his watch-car Bluewill hope to become the new league champions. Meanwhile, the evil organization Shadow attempts to eliminate Watch-Cars with their Monster Cars.

Elementary school student and Robot Racing super-fan Kyle Hughes finally gets the chance to live out his dreams, and joins the League with Alpha, Beta and Theta— the three Tobots built by his mother, Dr. Hughes.