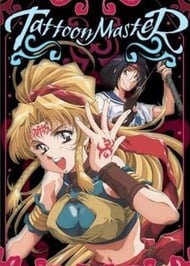 While visiting the legendary Tattoon tribe, high school delinquent Hideo's mother traded her son's hand in marriage for the ability to continue her research -- unbenounced to Hideo, of course! To him, women are self centered, indulgent, and the source of all troubles, which makes meeting the eager to please Nima all the more unappealing. Now, with Nima and class president Fujimatsu both after his love, and new enemies arising from the woodwork, will Hideo live long enough to fight another day?

StorySound familiar? That's because this plot has definitely been done before. In the same fashion as Girl from Phantasia, Tattoon Master delivers a fairly lackluster story of a girl who falls in some sort of unrealistic love with a very unwilling boy, and clings to him the entire show while other random bad guys attack. In this case, it has a bit of a Scryed feel, as Nima and a few others have strange powers from the Tattoon tribe, that they use to kick ass. But for the most part, it's the same old story here, tied up in decent animation for once. Tattoon Master is primarily a comedy, and I guess *could* be referred to as a romance series, but that would be a stretch. It is full of very funny random humor, which isn't prevalent in most series or OVAs like this. The romance part ends up being horribly flat, with an unrealistic chance of a relationship on one side, and an immature different chance on another side. And quite frankly, the majority of the 2 part OVA ends up being a silly catfight between the two girls. Booooring. Throw in some random bad guys at the end, and that's Tattoon Master in a nutshell. 6 for the good comedic aspects, but also for the weak plotline that is generic in most ways. AnimationWhile Tattoon Master doesn't boast impressive newer graphics, nor does it have CG or anything unique that would set it apart, the graphics still are decent. Characters definitely look cookie cutter of older graphics, and Nima is ecchified out to the extreme, which could be a good or bad thing, depending on you. Characters in general have simple shading used, with solid black lines for outlines, and large oval eyes. I definitely was not a fan of the colors used, which all were very washed out looking (there are tons of old OVAs/series which have this, for some reason). The fighting scenes were probably the "best" of the OVA, with tattoo like marks lighting up when special powers were used, and decent looking special powers, I suppose. Nothing fantastic, but still probably one of the highlights of the OVA. SoundI really have nothing much to say about the audio of the OVA, except that it's fairly generic. Keyboard type sound was used for all the songs, which aren't many. A large percentage of the time, there is no audio at all, just various city and outdoor sound effects. The rest of the time, mostly during fight scenes, the same very forgettable keyboard tracks are playing. Voice acting seemed fine, though Nima's character kept changing from very airheaded/ditzy sounding, to very serious and mature. It was very strange, to say the least. CharactersI'm fairly torn on how to score this. For short series/OVAs/movies, it's always difficult to rate this category, since the easiest way seems to be related to character development. Due to this being a 2 episode OVA, there really is no character development to be found. I'm rating this mostly on how well the characters fit their roles. Hideo definitely fit the bill, being a badass who really doesn't care about anyone else, and sticks with it, even till the end. Secondary characters such as his friends seemed weak and changed their stances a lot on things, which wasn't very well thought out. Nima was definitely the large failure of the day, though. In the very beginning, she is shown to seem like an adult woman, very confident and no-nonsense, very strong-willed and independant. But then when she crash lands in Hideo's apartment, suddenly she is a feeble, weak, airheaded bimbo who cannot live without him, since she is of course in love with him for no reason, and can't stop being clingy! Yikes. And if this wasn't confusing enough, she sometimes randomly changes back to this strong, serious Nima... only to change back to bimbo of the year. What's up with that, anyways? OverallWhat saves Tattoon Master from getting a lower score is the fact that it DOES have fairly random, truly funny humor. The overall story, however, is generic and done before, the characters are fairly weak except a few of them (Hideo, his dad, for two examples). The animation is decent, the soundtrack is average, so all in all, a fairly average watch. If you have the time and want to see an oldie, or specifically need a small dose of random humor, you could probably check this one out. Else, Tattoon Master is fairly forgettable 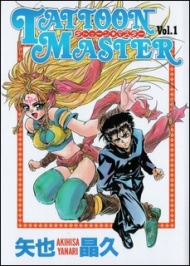