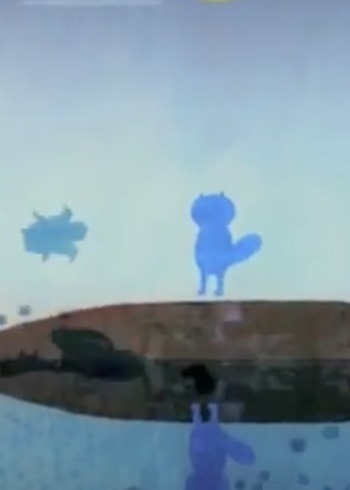 Under the pale glow of a full moon, the night air is filled with spirits and magic -- mere humans would do well to stay at home on nights like these. If you happen to be a shapeshifting fox, however, the time is ripe for a exploring a run down temple nearby, no matter how ghastly its appearance may be. As it happens, sometimes appearances are not deceiving: the temple is haunted by a mischevious tanuki who does his damnedest to scare the intruder away! A fierce battle of wits between the mythical creatures starts. The tanuki seems to know every trick in the book, but the fox has been around the block a few times too...

These are the daily lives of a raccoon dog who is not quite with it and a mischievous fox who likes to tease the raccoon dog. The two are close friends who live together on a mountain. Their other friends include a wolf, a bear, a rabbit, and birds.

The series follows Ponkichi, an angry tanuki who comes down from the mountain and slashes humans.

Second season of The Eccentric Family.

My Master Has No Tail

The time is the Taisho Era. Mameda, a tanuki girl who came to Osaka dreaming of becoming a human, meets a popular rakugo artist, Daikokutei Bunko. Mameda, who was impressed by the storyteller's way of storytelling, which is a technique taught by a human being, decided to become a disciple. Rakugo artist training has begun!