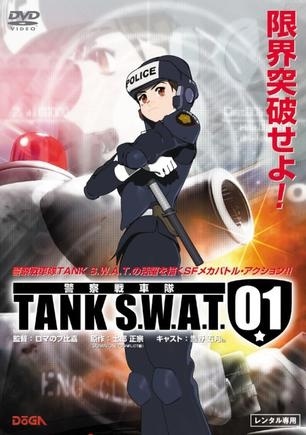 Appleseed and Tank SWAT, besides having Masamune Shirow at the helm, are both short, action-packed OVAs about a police mission gone wrong. Each has unusual characters (cyborgs and catgirls, oh my!) and a futuristic, somewhat cyberpunk feel. I didn't care much for either of these, but fans of one might enjoy the other.

It is the year 2023, 30 years since the time of the Silent Crisis that brought the world to the brink of destruction. In the present, other-dimensional beings known as the Lucifer Hawk are running rampant, and threaten to take over the human world. The only hope for mankind is the AMP -- the Attacked Mystification Police -- a group of women with paranormal abilities who are dedicated to stopping the Hawk at all costs. With the frequency of attacks increasing and the bodies piling up, it's up to Katsumi Liqeuer and the rest of the gang to stop the invading threat... before it's too late.

If you are looking for something better than Tank SWAT and liked the police aspect, you might enjoy Silent Mobius. It has more of a mysterious feel, monsters aplenty, and has plenty of character development and action. Remove the campy nature of Tank SWAT and add everything better, and you have Silent Mobius.

Both are short action anime featuring catgirls with guns. Also, both of them were animated in full CGI and directed by the same guy.

Years after taking up normal lives incognito, the cyborgs are forced to fight again when the superhuman Blessed appear with a plan for humanity.

Many years ago, nine humans were captured and transformed into cyborgs for the purposes of becoming agents of evil. Instead, they rebelled, becoming champions of justice anytime the earth was in need. Now, in a post-9/11 world, the meaning of "justice" has become clouded. The cyborgs, untouched by time, and some without memory of their status as heroes, have since taken up lives as ordinary civilians. But when a mysterious force known only as "His Voice" compels people across the world to commit unspeakable acts of violence, even cyborg 009, Joe Shimamura, falls victim to the irresistible faceless power. In an era when cyber-terrorism is rapidly advancing, how can the cyborgs combat an enemy that has no face, no weapons, and seemingly no motive?

A compilation film, recapping the Ghost in the Shell: SAC_2045 series.