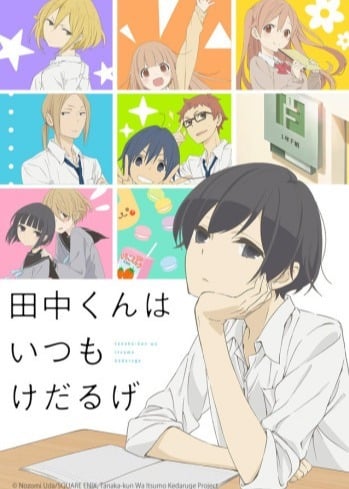 Tanaka will spare no effort to have a lazy day. He visits a temple before school to pray for a peaceful day, but Miyano, a girl from his class, asks him to make her his apprentice. Miyano explains she wants to be a listless mature woman, but not wanting any new friends, Tanaka declines. However, Miyano doesn’t relent and Tanaka eventually accepts if it’s only for a day. Miyano begins observing Tanaka and attempts to mimic his listlessness.

Anime-Planet users recommend these anime for fans of Tanaka-kun is Always Listless. All available to watch right here, right now!

Both extremely relaxing anime with no huge dillemas for the main characters. While Flying Witch is a lot in a family scenario, Tanaka is almost always in a school setting. Both animes give off a very chill vibe.

Not only did both of these anime air at the same time, but they both have a very gentle, calm and slow pace. With plenty of comedy to go around!

how doesn't love lazy and clueless people, both of these shows are awsome!

If you like light comedy about school and romance, I suggest both of this shows. They are fun, not too long and quite enjoyable.

MC’s are extremely enthusiastic about methods of not paying attention in class. Also, the characters which tend to judge them and up admiring them for their dedication to the odd ways they chose to avoid class work. Fun and drama, humour, mischief and romance, these series have it all!

The story of Mikazuki Subaru, a novelist who is shy and struggles in relationships with other people, and a cat who was dumped by humans and lived a tough life on the streets. Through a twist of fate, the two of them end up living together. This heartwarming tale illustrates day-to-day life through the eyes of both man and cat. These moments seem trivial, but...

If you are looking for a light slice-of-life story then I would really recommend both series. I watched both of them with a smile on my face.

Both are easy-going slice of life anime with male protagonists'Tanaka-kun is Always listless' are students where 'My Roommate is a Cat' are mostly adults.