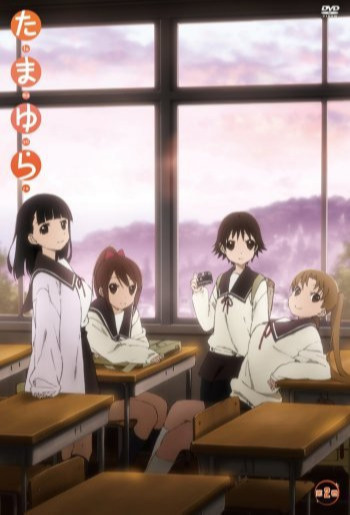 Tamayura is a four episode OVA (two episode OVA on the site I watched it on as the first two episodes were combined and so were the last two) that kick starts a heartwarming slice of life series. Tamayura: Hitotose follows (and then it's OVA) and then Tamayura: More Aggressive (and it's OVA), followed by four movies which bring the series to a close. I'm currently waching Hitotose and just basking in the cuteness that is this series! xD

Now, I shouldn't have to state the obvious but... the series is SLICE OF LIFE, which means that it's a very slow paced series. If you are a fan of series like Non Non Biyore, Kiniro Mosaic, Aria (the Animation, Natural, Origination, etc), or Gochuumon wa Usagi Desu ka then you may very well enjoy this series. I'd suggest giving this two episode OVA (or four, depending on where you watch it) introduction to the series a try. If you enjoy them then, by all means, keep up watching the rest that this series has to offer. However, if you didn't much care for them... then don't watch further. The series doesn't have some magical make over and speed up. Nor does it have some random as hell plot twist that keeps you on the edge of your seat. Instead this series is exactly as it looks from first glance. A soothing, laid back, calming series to just kick back and watch while you relax and unwind.

The series is focused around Sawatari Fuu (fondly known by her childhood friend Kao-chan as 'Potte') who moves to the country where she used to visit as a child. Her father had passed away several years before and after re-discovering her love for photography Potte sets off determined to take pictures that will bring joy and happiness to others. Along the way Potte re-kindles her friendship with her childhood friend Kao-chan and makes two new friends Norie and Maon through her love of photography.

The series is cute and calming and these OVA eps really give you a feel for the series and although the animation isn't really anything spectacular the simplicity is actually part of it's charm, in my opinion.

If you're a fan of the Slice of Life genre then you'll undoubtedly enjoy this series!

A hidden Gem. !!!! One of the best Slice of Life anime out there. Everything about this anime is so calming. The soundtrack and atmosphere, the characters. The pacing might not be for everyone, but it is perfect for me. The best part about this anime is the after taste. After watching it I felt calm. Tamayura focuses on mundane day-to-day kinds of stuff while keeping the main plot intake. It's just soothing to the heart. I highly recommend anyone who enjoys the Slice of Life genre.