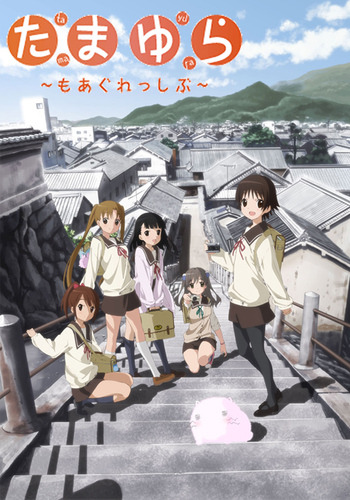 Both have a group of girls doing things without any real going on plot. Both series are ligth hearted and have quirky characters. The colourtemplate is quite similar.

Another slice of Life, though Yuyushiki features blatant hints at girls love both series imply it at some points during their run. Both series are full of random slice of life moments with little to no connection to each other.

Both series have few happenings between their episode but keep their running time light spirited with the occasional gag. Both have visual mediums in them as primary attention point however the medium greatly differs. The girls  all have rather quircky personalities. Both series are slow paced which might bore some people.

Both are slice of life series with the same kind of feel to them. However Minami-ke is far more fast paced and comedy driven while Tamayura is on the slow side with little happening each episode. Both however are character driven pieces. However Tamayura mostly focusses on one characters perspective while Minami-ke changes it's depending on the current person of focus.

Slow paced day by day type of slice of life with little happening each episode while keeping a fluffy tone and setting. Both series feature a short statured girl who's personality is meant to appeal to protective people.

Both are very slow paced slice of life anime that follow a group of school girls who live in a small, tight-knit community. They're both pretty relaxing, indeed nothing happens at all for large spells in each, but if you found one enjoyable then the other will be worth a watch.

Tamayura as well as the Aria series are very similar in three mains ways. First, there is an enormous strong atmosphere of conflictless slice of life (iyashikei) in both shows. This is slightly mixed with a tinge of the supernatural and/or magic in both series. In Aria, these mysterious and magical episodes are more frequent than in Tamayura. Third, the main cast in Tamayura and Aria are all female and although there are some male characters, those only play minor roles.

The main differences (which are minor at best) is the futuristic and outerworldy setting of the Aria series and Aria having somewhat more mature characters and a minor romantic narrative on the side.

Extremely similar shows in terms of overall pacing. Slow, good looking and a fun cast of characters. both are conflict-less and relatively slow slice of life.

Not much in terms of difference other than somewhat of a more overarching "plot" in Tamayura compared to the unrelated gag-comedy style of Aiura.

While Tamayura: More Aggressive is slow-paced, centered around photography and has little developement whatsoever, Wake Up, Girls! is faster paced, centers around idols and faces more serious issues.

In their core they both are slive of life anime that, even though they have their differences, somehow feel alike.

Nao and Miki are the sole members of their school's photography club, and have discovered the hidden secret of the wind. With the help of Mr. Taiki (a member of the ancient clan of the "wind-handlers" and one of their teachers) the duo soon pick up the secrets of controlling the wind and seeing it in its perfect beauty. With flying cats, lost tree squirrels and photography contests to boot, there's wind to be seen in any situation...