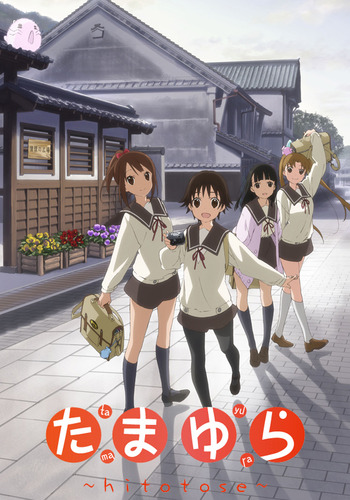 Tamayura: Hitotose centers around the teenagers Potte, Kao-tan, Norie-chan and Maon-chan, who are slowly beginning to chase their dreams, realizing that this does not come without doubts and problems.

Though that might be a typical yet well working concept for slice of life, only at the end of the anime it is that there is any real progress to that. The anime is really slow-paced, but does a good job at dodging becoming boring.

However, the story is lacking both originality as well as quality. Considering it barely medicore is fair enough.

The scenes and characters all seem a little mousy compared to other anime. However, this kind of gives this show a feeling of realism, which fits with the overall setting. Same goes for the animations, which aren't all too flashy, but do feel just right.

Acoustically there were no reasons to complain, apart from one. Maon-chans constant whistling is done so poorly that it might get on your nerves sooner or later. Wether that was done on purpose or not doesn't change the facts. It becomes less in the later episodes, though.

The music in the anime as well as the opening were all beautiful, slow-paced and peaceful songs perfectly befitting the setting. Nicely done on this one.

The characters in this one are the element that gave this anime something slightly refreshing every now and then. Of course, they are your usual people with their usual problems they have to face, but if it had been just that, that anime might have become boring rather soon.

However, most of the cast has got some traits that make them slightly more interesting. Be it Dougou-sensei's overly energetic attitude and lame sense of humor, Norie-chan's loose tongue or how Hanawa-san's terrible driving creeps everyone out, those things made this slow-paced anime a little livelier.

Not so well done was the overall character development. It is even more slow-paced than the story itself. For most of the main cast, you barely notice anything changing in them besides Maon-chan's whistling becoming less. Here I really was hoping for more until the very last episode and was left disappointed.

Should you watch this?

This show is clearly cut out for people who are into peaceful, eventless slice of life anime. If you don't especially like them, you will find yourself bored really soon. It's a fair show, but only for those enjoying such things.

Tamayura: Hitotose is the follow up of the 2010 four episode OVA. I would suggest watching those before watching this continuation, though it's pretty easy to follow even without you having seen them... but you would definitely be missing out if you skipped them!

This series follows four friends as they deepen their friendship and follow their dreams. Big or small. Whether they dream of making people happy through photography, or through making sweets, or simply making friends. It's about life and just enjoying each small little achievement, and those small moments that bring joy to our life. It's about learning to move forward even when things don't go our way, and learning to let go of the people and things that we lose.

This anime often makes you reflect on your own feelings or experiences and can alternately bring a smile to your face or even make you teary eyed (or is that just me? I admit to being very soppy. -_-'). It's a very sweet and heartwarming series that I'm thoroughly enjoying!

For the most part, each episode is pretty much episodic. Some episodes may tie in together, but they're pretty stand alone with an overall sweeping plotline that binds the series together... if you squint you can see the connecting threads lol.

Again, the animation is pretty simplistic, but really does add to the charm of the series. It doesn't need the high budget animation or bright colors. It's lovely just the way it is.

However, I do warn, once again, that this is a Slice of Life series and thus is very slow paced. If you enjoy series like Non Non Biyore, or Aria (the Animation, Natural, Origination, etc.), Kiniro Mosaic, or Gochuumon wa Usagi Desu ka then this may very well be the series for you! However, if you didn't find any enjoyment in those series then I'd avoid this one. I, personally, find this series a very calming and relaxing series to kick back and de-stress from the crap that real life thows my way. I appreciate it for what it is, and don't expect some random ass plot twist, or for it to suddenly pick up speed. Don't expect that. It won't happen. Just accept it for what it is and what it offers!

So, if you enjoy slice of life then don't pass up on this series.

However, if you don't enjoy slice of life then... why are you still reading this review and wasting your time lol. Go watch something more geared to your own taste!