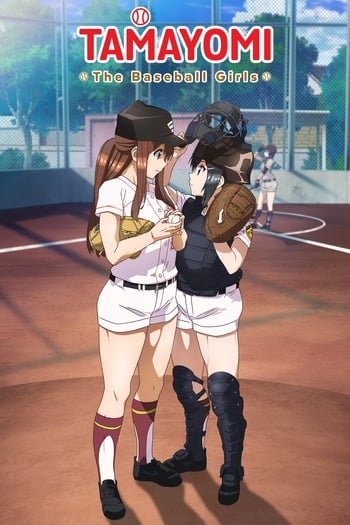 Story: basic sports anime. Seemed okay and realistic. This is NOT a GL. Some other websites listed it as such and so I started it. Anime-Planet does not list it as one which is correct. There is just the normal queer-baiting and only one questionable moment between two of the girls, which is not physical and can be interpreted as friendly (I didn't, though).

Animation: If you want to laugh, please watch this show. The number of times that the animation switches to this weird CGI thing and looked just terrible made me burst out laughing. Honestly, this is what I am going to remember when I think about this show.

Sound: (dubbed) Basic cutesy anime sounds and the voices were so high that I wanted to scream.

Characters: Pretty surface level. The main characters were not given much, if any, development. The side characters had more depth than anybody you think should.

Yeah don't want this unless you want to laugh and/or be disappointed.

It Is Distressing To Be Pro
Yomi Takeda was a pro pitcher of her school's team in junior high. However, she was the only ace in her club and other club's players could never catch up with Yomi, hence Yomi quits baseball, graduates from junior high and enrolls in Shin Koshigaya High School. At Shin Koshigaya, Yomi meets her childhood friend Tamaki, who is also a skilled baseball player, as well as a catcher that has the needed talent to pick Yomi's strongest ball. Together, the two can finally fulfill their childhood promise and start their baseball journey once again.

Cute Girls Doing Cute Things
There are sports series that focus seriously on the sport, they use the sport to develop the story, or build up the tension for the viewer and there are also sport series that are basically cute girls doing cute things. And as you might have already understood it, Tamayomi is exactly cute girls doing cute things type of the anime. And the good thing about that is that the series does not try to hide what it is trying to be, it never gives any hints that this series is going to be somehow similar to Major, or One Outs. The story makes sense overall, but the only problem is that it lacks uniqueness, something as small as a grain that would make this series more memorable.

Animation and OST
Animation wise it is absolutely fine. The animators pay attention to how players' uniforms should look like, background also looks fine, as well as the fact that all characters look different. Another thing I just cannot ignore is the girls' legs, their height and their legs somewhat do not match, to say the least. But well, I guess this is how the manga creator sees it, so it is fine. The OST also does its job, making this series what it is: cute girls doing cute things.

Characters Could Have Been Better
All characters do show some signs of development, their backstories, as well as dreams are shown well. They never are annoying, they give a laid back feel to the viewer and never fail to be what they are. However, just like with the story, the characters suffer from flatness, their flashbacks are sometimes too random, the dialogues are just boring, which makes the characters average. It is not the level, they are so bad that this series is horrible and unwatchable, they are neither good, nor bad, they are just 'fine'.

Tamayomi: The Baseball Girls Manages To Be What It Is
The series does have some fan service, but it is not overused, like some series do it. The storyline, as well as the characters are fine, but there is nothing unique and interesting about them. Do not expect something similar to One Outs, this series, as it has been mentioned many times in my review, is about cute girls, doing cute things. It is just that monotonous SoL that is okay to watch from time to time, but when you try to marathon it, you will hate it, hence I recommend you to watch this series little by little, if cute girls doing cute things is what you are looking for, if not, avoid this series.

I don't know why the reviews are so low. I prettt much binged this series in a few days. It's rare to get a good all female sports drama. I went into this expecting copious amounts of fan service but there really wasn't any. I appreciate the fact the artists made the baseball girls fit and muscular instead of stick figure legs with huge boobs. Definitely worth a watch in my opinion. Hope they get a second season!!

Tamayomi : The Baseball Girls is what it is.  A simple baseball story about girls who love to play baseball with some strategy and thought behind the plot. Its short, its sweet and it's satisfying. Fan service is at a minimum. Everyone supports each other, everyone gives it their very best and there are no villains. Just opponents and sportsmanship. Lots of positivity. No swords, blood, death, villains, ridiculous characters that are anatomically impossible. Not a lot of depth but good spirit throughout. Sometimes thats nice to watch.

If you put fanservice and girls’ baseball together, Tamayomi isn’t the first thing to come to mind, but it sure wishes it was. When it isn’t preoccupied with its lame attempts at cutesy fanservice, Tamayomi is surprisingly capable of telling a halfway-decent baseball story. By which I mean there’s an adequate focus on the game and its mechanics, as well as an almost-average team chemistry that would have been more memorable if the characters had stronger, more fleshed-out personalities.

It could have been okay and even middle-of-the-road if it wanted to, but between a team manager who wouldn’t stop groping her players, terrible art, and helium-laced voices, there was barely anything solid for Tamayomi to focus on, and so, it's all over the place even when it’s already running up to take its place on the field.

Truth be told, there’s not a lot about this that helps it stand out. But dissing Tamayomi feels a lot like kicking a puppy in the face, even if its sounds, squeals, and squeaks make it sound more like a toy puppy than the actual thing anyway. There’s no crying in baseball and it’s something Tamayomi stays loyal to by being so unremarkable about itself, that there’s barely anything here that will provoke any kind of strong emotion in you.

This isn’t the first sports anime out there to feature an all-girls baseball team and I certainly hope it won’t be the last. But the day we get a watchable sports anime that treats its female characters like actual athletes won’t be coming for a long, long time yet, it looks like. Sucks for me, sucks for anyone else hoping and praying for a zero-fanservice sports show that’s just for the girls. If you’re just looking to get your feet wet in the world of female-led sports anime, then you can for sure absolutely do better than this.