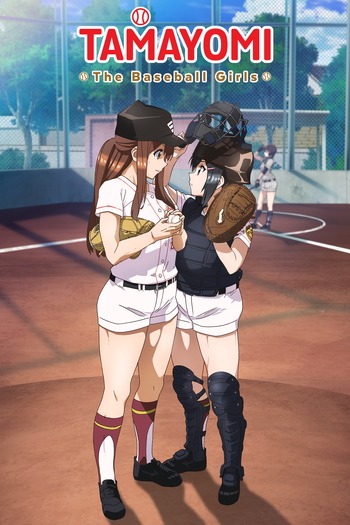 Both are baseball anime about a female team who have to work their way up and grow together as baseball players and friends.

Because they are both a good mood, light-hearted, CGDCT-type sports anime, featuring high school girls' baseball.

Both are based off females coming together to form a baseball team (because there are not enough or no team there) at their schools who tries their best.

Ryo has always enjoyed baseball, and has an incredibly fast pitch to prove it. She is better than any man she knows, yet has never really put her skills to the test; after all, baseball is a “man’s game”... until now! Keiko Himura, the chairman of Kisuragi High, has a goal: to create a team that proves women can play just as well as men -- if not better -- and she has chosen Ryo to be the new team's captain! With 8 more teammates to find, can the girls lead the team to the ultimate victory, to win at the famous stadium Koshien?

Old school, girls' baseball anime.  Full of heart, ups and downs, and hard work.  You never know how well the girls are going to do.  A bit of romance as well, but not a huge part of the show.

Kurata from Bijyou feels guilty about beating the crap out of other players. Abe’s accidental injury strikes a chord, and he no longer wants to be involved with Roka’s dirty schemes.

Bonda Natsunosuke (26, single), is a left-handed relief pitcher for the professional baseball team, the Jingu Spiders. He became a pro right after high school and now in his 8th year makes 18 million yen a year, and is not what you'd call a "first rate player." "I don't know how many years I've got left to play after 30." "Only a few can become coaches or commentators after they retire." "Pro baseball players need to make their money while before they retire!" Despite the harsh realities, Bonda always repeats the same phrase: "There's money buried in the grounds."

Big Windup! The Basics of Basics

Abe wasn’t a fan of Haruna, but there’s a lot to like about the guy. He’s tall, good-looking, has a one-in-a-million arm, and he wants to win no matter what.