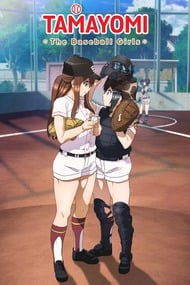 If you put fanservice and girls’ baseball together, Tamayomi isn’t the first thing to come to mind, but it sure wishes it was. When it isn’t preoccupied with its lame attempts at cutesy fanservice, Tamayomi is surprisingly capable of telling a halfway-decent baseball story. By which I mean there’s an adequate focus on the game and its mechanics, as well as an almost-average team chemistry that would have been more memorable if the characters had stronger, more fleshed-out personalities. It could have been okay and even middle-of-the-road if it wanted to, but between a team manager who wouldn’t stop groping her players, terrible art, and helium-laced voices, there was barely anything solid for Tamayomi to focus on, and so, it's all over the place even when it’s already running up to take its place on the field. Truth be told, there’s not a lot about this that helps it stand out. But dissing Tamayomi feels a lot like kicking a puppy in the face, even if its sounds, squeals, and squeaks make it sound more like a toy puppy than the actual thing anyway. There’s no crying in baseball and it’s something Tamayomi stays loyal to by being so unremarkable about itself, that there’s barely anything here that will provoke any kind of strong emotion in you. This isn’t the first sports anime out there to feature an all-girls baseball team and I certainly hope it won’t be the last. But the day we get a watchable sports anime that treats its female characters like actual athletes won’t be coming for a long, long time yet, it looks like. Sucks for me, sucks for anyone else hoping and praying for a zero-fanservice sports show that’s just for the girls. If you’re just looking to get your feet wet in the world of female-led sports anime, then you can for sure absolutely do better than this.

Story: basic sports anime. Seemed okay and realistic. This is NOT a GL. Some other websites listed it as such and so I started it. Anime-Planet does not list it as one which is correct. There is just the normal queer-baiting and only one questionable moment between two of the girls, which is not physical and can be interpreted as friendly (I didn't, though).  Animation: If you want to laugh, please watch this show. The number of times that the animation switches to this weird CGI thing and looked just terrible made me burst out laughing. Honestly, this is what I am going to remember when I think about this show.  Sound: (dubbed) Basic cutesy anime sounds and the voices were so high that I wanted to scream.  Characters: Pretty surface level. The main characters were not given much, if any, development. The side characters had more depth than anybody you think should.  Yeah don't want this unless you want to laugh and/or be disappointed. 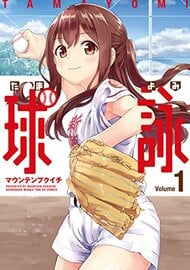