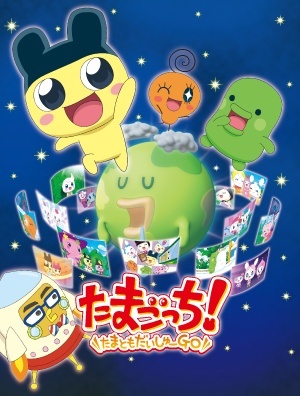 Kokoro Yotsuba is a fifth-grade student who is very clumsy but very careful and caring to her belongings, learning from her grandmother about "everything has a soul". One day, she witness the birth of a strange creature from one of her colored pencils: a Cocotama named Luckytama. Surprised on each other, and with Kokoro now permanently linked to the "Contract of Secrecy", she must agree to keep their kind a secret to the world. Now living with Luckytama, she and him learn each others' friendship while meeting with other Cocotamas.

The story is about a young log boy named Kubbe (Block, or literally "log" in Norwegian) and his adventures in nature.

The story of Haitai Nanafa revolves around an energetic middle school girl named Nanafa Kyan. Nanafa lives in Okinawa with her grandmother who runs the "Kame Soba" soba shop, her beautiful older sister Nao who is in high school, and her younger sister Kokona, who is in elementary school and has a strong ability to sense the supernatural. One day, Nanafa witnesses a seal fall off of a Chinese banyan tree, and three spirits who live in that tree are unleashed. These spirits include Niina and Raana, who are "jimunaa" spirits. The third spirit is Iina, who is an incarnation of an Okinawan lion statue. As spirits start appearing one after another, the peaceful life of Nanafa and her family begins to change.