Tales of Zestiria: The X - Reviews 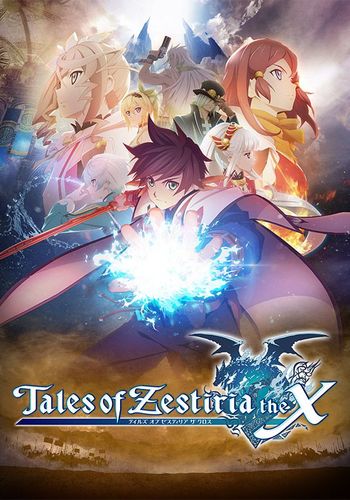 When I started watching this series I had high hopes, sadly this anime doesn't come close to what I had hoped for, it contains far too many flaws in it's fantasy setup for my taste. Don't continue reading unless your fine with some spoilers!

The story starts out with the princess of a kingdom out and about, stumbling through ruines and going on crazy quests, the entire beginning of the story seems unstructured, for one the princess is naive in the extreme and acts totally unbefitting for a ruler, the main plot is built up in an amature fashion, the princess interest in ruins, which for some reason are randomely placed literally whenver convienient, furthermore it is unlogical for the pricess, the ruler of the kingdom to constantly be putting herself in danger, instead of actually ruling and having others do such tasks in her stead. Another surprise of the story is when you find out how masterful her fighting skills are for a normal teenage looking girl, who doesn't seem to have ever trained, the only hint is another non suitable warrior character, which the princess calls her master. What alos bothers me is that no background information is given, who are her parents, why are they not mentioned and what the fuck is she even doing in her kingdom?? I'm not surprised she has assasins after her (which miraculously all fail, since she's such an amazing fighter not even trained assasins can "harm" her). For me the story took an upward turn, when introduced to the main character( The shepherd) Who adds a little more direction and life to the story. Sadly that life is quickly extinguished, when you see his steriotypical naive nature, which even though far more interesting than all the other characters introduced, is made worthless rather fast as the story progresses it's "plot". Another unrealistic scene is the fight the main character has when his home is invaded my evil and all the seraphs split up for some reason to go fight it alone?- Which ends in a minor casualty and the main character without even being made a shephard yet smashes through walls and flies over a hundred meters, where earlier a seraph had to save him from a 60 meter fall.. What's more, later the lady of the lake proclaims that she cannot purify evil, only the shephard, which makes me wonder what use the seraphs are for than. To me it seems the story is made up on the go.

The animation is slightly above average, there are some scenes which are beautifully made, on the other hand the character animation makes it hard for me to take the characters seriously, for example when the princess loses all her friends (who were never properly introduced in the first place), it seemed more like a bad joke to me, an attempt to be serious. Furthermore the fighting scenes are mixed, some are made rather well and some make me wish they'd just skip the entire scene and cut the bullshit.

I'd recommend this anime to people who are bored and have nothing else to watch, it may not be too great and there are loads of better anime out there, but it is still above average compared to a lot of other crap out there and certainly in the top 13 of this seasons releases. I strongly however doubt that this will become anyones favorite and if your tastes are similar to mine, you'll probably get bored with this anime rather quickly.

I decided to watch this anime, cause I saw quite a hype going about it and it has 4 star rating here as well. Well disapointed describes my emotions perfectly. The first 3 episodes is an absolute bullcrap. They just throw you into this world with no explanation whatsoever, "introduces" this absurd princess, then starts juping from place to place (apparently following what the princess is doing) again not explaining what is going on properly. The whole of first episode I was just asking 'What?' and 'What's happening?'. By the time they acually introduced the main character, Soryu, I was almost ready to give up. Not that I can say anything good about him either, just another "overly excited naive hero". At least the story itself started to make more sense from there on, but they never bothered to give any backstory to anyone, so I still was left with a ton of questions. All the characters are weak as well (mostly because we don't know anything about them, other than gender name and status). I can't even say there was any character development either, cause there wasn't. Only good about this anime is it's above average animation and quite awesome soundtrack.

Now, please, don't criticise me too much, but I only found out it was based on a video game after I watched it. And after finding that out I can say that it does not even work as a promotion to the game. I have no desire whatsoever to play the game after watching it. On the contrary I think it would be quite boring.

That's just my opinion though, you don't have to like it...

First anime I have seen where the male lead wears HIGH HEELS into battle!

Please don't watch this! The show sucks and I can't get the intro OUT OF MY HEAD!

Hello Guys! Let's talk about Tales of Zestiria: The X ! an Anime airing right now by the studio Ufotable best known for it's work of the Fate/Stay series that has gorgeous animation!

B.E.A.U.T.I.F.U.L is it absolutely gorgeous! the special effects, the sound, everything just blends in together so well! let's also not forget that they are the ones who made the Fate/stay serie! that alone should be enough to justify!

As of now we don't have much informations concerning the characters, althought we see some nice transition of the characters! will be updated when more episode are out!

UPDATE - The show gets substantially better in the last two episodes. But I'm disappointed I had to watch the whole thing before it got better.

TL;DR - They had the chance to expand into story and animate some great stuff from the game. They didn't. It's boring, it skips around too much, it moves too quickly, and none of the charm, the excitement, or the beauty from the game transferred to the anime. Also, why the hell did we suddenly devote two episodes in the middle of this to Berseria, when it didn't do anything to educate viewers on Zestiria's background?

So much of the good stuff, including drama from evil characters from the game are just not present here. They're trivialized, and it's almost as if the entire plot itself was dumbed down because they couldn't figure out how to turn this thing into an anime. As mentioned in summary, story skipped some pretty major (in my opinion) events, and even if you ignore that, it progresses too quickly without making much sense to a non-Tales-knowledgeable person.

Animation was pretty in some parts. As usual, ufotable makes some very attractive and visually appealing characters. But there wasn't anything outstanding or spectacular. Some of the hellions looked kind of weird, like they switched from awesome anime to sub-par CG and then back to anime. Blegh. At least in the game, all of the parts that were anime were *only* anime.

One of the few things I highly enjoyed about the anime is the good quality voice-acting and music. Sound effects were fine too. Pretty good, although the game is still better.

What the hell happened here? The only characters that maintained 100% of their personality from the game were Sorey and Rose. Mikleo isn't as sassy as he is in game (he's hilarious), they went and turned Alisha from tomboy knight to damsel-in-distress, and Lailah also doesn't retain any of her super awkward, but cute quirkiness from the game. They went and completely toned down the "evilness" of the lord guy in Ladylake fighting to kill Alisha, and at no point in the anime do you ever feel the desperation of the people facing the "Age of Chaos" that you do in the game.

Overall, just super disappointed. It pains me because I'm 100% a massive Tales fan - every time a new game comes out I throw my wallet at them like I'm a crack-addict. The anime just doesn't cut it for me.