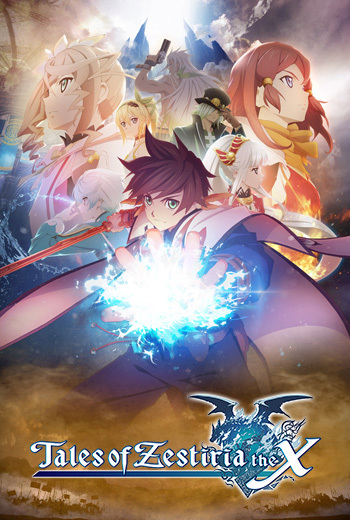 This season surprisingly takes a detour from following the flow of the story from the game and its story in general. If anything, this season is even better than the game as things that seemed simple at the surface all have much more depth and complexity. The first 6 episodes dive deeply into Rose and a lot of her story and her background. The events still match up with the game to some extent, but this is more of a in depth look at what happened during that timeframe. The start of it may be a bit slow, but it builds a really important connection with the choices Rose makes and how she fits into the main story with Sorey, and why she chooses the path she does.

After the Rose filled episodes, Alisha is brought into the mix and shows her development and how she fits alongside Sorey. The mood from the first half continues as the malevolence plays a major role in the dark theme, then eventually some light shines, and more darkness. The pacing also gets drastically faster towards the last episodes as it heads towards the final battle. This is also where it gets epic and has more action with the Armatus forms (my favorite piece) and the showdown with the Lord of Calamity come. The final episode is a pretty amazing conclusion/battle. Lots of flash and all the armatus power you could want!

While the pacing may seem slower in the first episodes, having played the game, I can say that all of what is shown is pretty critical to what makes Zestiria. The concept of malevolence is made very clear and so are each of the main characters roles. There is a lot more flash and effects as you progress through the season though. The depth, amount of information, and clarity of the characters is a beautiful combination really and made me love the Zestiria universe even more. It is really neat seeing the difficulty and effort that goes into the armatization process for example, where as in the game, the characters are simply able to do it.

As you would expect based on the first season, the animation is crazy awesome and the sound is just as amazing. Any effects look amazing and from the opening theme, all the way through to the ending theme, the amount of effort and work put in really shows compared to almost any other anime out there. In episode 5 of the dubbed version (and ep8 skit) however, they had a different voice actor for Sorey for whatever reason, and it was just terrible sounding, so that is the reason for a .25 sound deduction. This could have been avoided but they made a slip in judgement and choice there.

Also, don't forget to watch the little skits after the credits. Naturally, they are in the same format as from the game and have the same charm. Just a little extra effort on top of everything really.

If all that wasn't enough, the additional connection to the Tales of Berseria universe and some of the story referencing to that era and a few of its main characters was a neat addition. It is always nice to see ties among the different universes and how the stories connect between them.

Overall, an amazing season. It is a heavier story and character driven season, but this is an important aspect of the Tales series. It was also nice to see a lot of new stuff and lore not seen in the game. I could write tons more simply because of how much I love both the anime and the game, and the depth and complexity behind stuff that seemed simple is just beautiful which I think makes the anime more exciting than the game.

The sound effects are not amazing and they're not bad either

Tales of Zestria X isn't the perfect anime but its pretty good! If you are goner for good animation like me, you count yourself in. However, the storyline is a bit messed up and the most of the character are mesed up. I mean the lead is a naive, guileless stupid kind of person sometimes you just wanna slap. However there are a few good characters like the lead's best freind and there is a bit of spark between them and that charcter had got quite some deapth. The animation is really good tho. Damn good.