Tales of Zestiria: Dawn of the Shepherd - Reviews 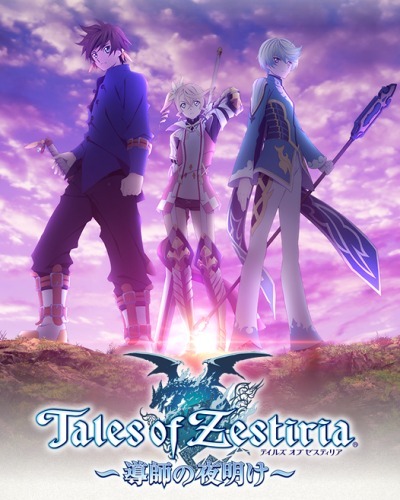 Among the countless varieties of computer games, jRPGs have always been somewhat special; most of them have quite a plot to boast about.   Tales of Zestiria the Cross is a Japanese anime television series based on both Tales of Zestiria and Tales of Berseria video games developed by Bandai Namco Studios that was made to promote both games. It is produced by Ufotable, directed by Haruo Sotozaki and written by Hikaru Kondo, featuring character designs by Akira Matsushima and music by Motoi Sakuraba and Go Shiina. But did it help to appreciate Berseria and Zesteria? This is the question I will try to answer.

Tales of Zesteria as mentioned before is based on the game and, of course, the game has many details that have not been mentioned in the anime adaptation.  Story wise, from way back, people worshiped Seraphs as Gods. Seraphs are beings that are able to use magic, however, they have always been among people. Yet, only a few are able to see them, those who can, leave their names and legacies in the history of the mankind. Sorey, the main protagonist of the series, is a human raised by the Seraphs. Long-long time ago, Shepherds, humans contracted to a powerful Seraph, were that only power keeping peace and all terrors of wars away from the humanity. They are no more, so the world sinks in malevolence. Sorey having saved the princess, finds out that the humanity is in grave danger yet again. He together with his friend Mikleo and the princess Alisha embarks on a quest to save the mankind.

The fact that the series is based on the game is pretty obvious; there are so many interesting characters, with a well thought out storyline. And, of course, it is nothing special for a game, where you can devote character and story as much time as you want, however, it is all different for an anime.  So, long story short, Tales of Zesteria, does not have enough episodes to work with, in result, characters do not receive enough development. Indeed, the heroes cannot be called bad, because they still get some development to work with. And this is the main problem, because not only does the series lack enough time to provide the viewer with a good story and well-developed  characters, but it also tries to show the events of Tales of Berseria, which is kinda a prequel to Zesteria.

And that is why it fails. Tales of Berseria alone has so many things that are needed to be explained to the viewers for them to have some kind of an understanding of what is happening, but the series also tries to focus on the events of Tales of Zesteria, so what I am trying to say is that with no time to waste, the creators should have made an anime adaptation of either Tales of Berseria, or Tales of Zesteria only. That way, it would have done the work the way it should be. But as something that should promote the game, it did its job pretty well. Even with some great misses in story and character development, Tales of Zesteria the anime is still an amazing journey, with quite a stunning animation and amazing OST. Indeed, it has problems I have already mentioned, but you might check the game and enjoy the amazing world of the both Tales games, too. Even if you do not want to check the game, do check the anime series; quite an enjoyable series to watch.

If you have not noticed the "based on a video game tag" this is based on the Tales of Zestiria game, particularly everything up until the game's opening credits. As with any adapted work, there are some different positives and negatives when it is compared to the original and when viewed as a stand-alone piece. So, after the story description there are two sections: as an adaption, and as a stand-alone piece.

This section follows Mikleo (a seraph), Sorey (a human who was raised by the seraph), and Alisha (a mysterious young woman who cannot see the seraphim). Sorey and Mikleo grew up as brothers under the care of their grandfather (the seraphim village Elysia’s elder). He taught them from a young age to be careful of creatures known as hellions since they cannot be fought through normal means and bring malevolence with them.

One day Sorey and Mikleo encounter a hellion and an unconscious young woman. After defeating the hellion, Sorey invites the unknown woman to rest up in Elysia even though his grandfather forbid all humans from entering the village since it could allow malevolence to leak in.

I honestly think this is the best Tales adaption I have seen so far.

As far as I can remember, every single cut scene from the game was included and 90% of the story was exactly the same. However, this made the altered scenes a bit strange. While I highly enjoyed the additional scene with Alisha telling Sorey about the fate of Lady Lake, the altered order of events surrounding the second hellion attack did not make any sense to me. Usually, I can see the meaning behind a chance (even if I don’t like it), but here I did not see any reason for it.

SPOILER If you have played the game you know that the hellion attacked Elysia after Alisha left, which is why Sorey decided to go warn Alisha that he was coming after her. However, here Alisha is present in the village at the time. In addition, Alisha tells Sorey about the Shepard ceremony before leaving. Either of these facts could have allowed for Sorey to leave with her immediately meaning that he would not have had to go search for her later. However, instead the rest of the scenes play out the same way. Alisha leaves, Sorey realizes the hellion is after her later, and he leaves in the middle of the night with Mikleo. END SPOILER

But as far as Tales adaptations go, the story is held tightly in-tact. While Abyss did a great job of keeping the most important events from a pretty long game, Zestiria has shown protential to keep the entire story.

As I said, all the cutscenes are included and they are almost all identical to that in the game. Therefore, characterization is nearly identical. The only real difference I saw was that in the game Alisha mentioned worshiping the seraphim but doesn’t in the anime.

The voices are the same, the music is the same!

It is very nice and pretty much looks identical to the game’s cutscenes.

As a Stand-Alone Piece:

Okay, even when I started playing Zestiria I found this beginning part of the game the most boring. Not only does including all of the cutscenes drag out an already boring part of the story, not much happens, and the anime ends without much of a cliffhanger. This makes me fear that though it is a great adaptation that many viewers who have not played the game will abandon it thinking it will continue to have this leisurely tone.

The highlight points of the story in here is that the hellions are introduced, there are two fight scenes, and it is hinted that Sorey will have something to do with saving Lady Lake and other human cities.

The animation is nice and gamelike.

Sorey receives the most characterization in this, Mikleo a bit, and Alisha little. Sorey is the protagonist, though so that makes sense. Sorey and Mikleo have a close, brotherly bon, and enjoy exploring ruins together. Sorey is a human who can see the seraphim because he grew up with them. Mikleo is a bit more reserved and possibly uncomfortable around humans. Alisha, on the other hand, intentionally withholds information about herself.

Overall, this is a great adapted work, however, I fear it fails to engage a new audience, especially considering how long of a break there is until the next movie. The game could get away with this lengthy leisurely beginning since you still had to engage with it, but here the viewer does not.