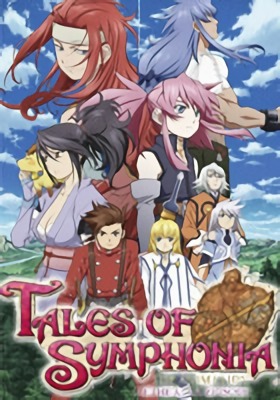 The story is rushed and all over the place and I know that since it's so short, they didn't have enough time to shoehorn in a lot of things from the game, but since the game is so long, I think they should've made this into a regular T.V. series than in OVA. That way, they can flesh out these complex characters and include more events that happened in the game. While, I can do with a few changes, such as the whole Chocolat thing because I don't care much for her, I would've loved if the series had stayed much more faithful to the game.

There is too much crying in it, while the game has came out in the time where video game characters hardly ever shed any tears, that still doesn’t warrant this much crying throughout every other episode of the series. Yes, I realise the characters have plights but I could do with some less crying. Presea cried a lot more than I remember her doing in the game. Now, let's go into more details about the problem with these characterizations and we'll compare them to the game:

Lloyd seems much more bubbly and silly here. While he does have a fun-loving side in the game, it's more toned down in the game. Yes, Lloyd is a kid, but he comes off as overly perky and it's annoying. Anime Lloyd is a lot more of a passive innocent bystander in the OVA while Game Lloyd was more of a pacifist who loves peace. Lloyd is also more of an idiot here than he was in the game such as in one scene that isn’t in the game where Soulless Colette is about to attack and Lloyd uses the power of love to stop her. What a cheesy scene. Game Lloyd was idiotic but showed some street smarts and logic at times.

Sheena is a lot more aloof in the anime and her hot-headedness is exaggerated here. She is a lot more violent than I remember her being. Anime Zelos is much more sassy here than he is in the game. He probably showed a bit of sass in the game but it's cranked up here. Presea is more impulsive here, shown when she suddenly attacks Regal right after hearing that he has killed Alicia. Game Presea was slower to anger and while held a grudge to Regal, she didn’t start fighting him off the bat until towards the end of the game.

Overall: This anime is a mess. This TOS series has completely screwed up Miyajima's vision of these characters. Play the game instead, it may be a little cheesy but a lot more realistic than this. This is just a cheesy adaptation of a nice game that is not the same as it.