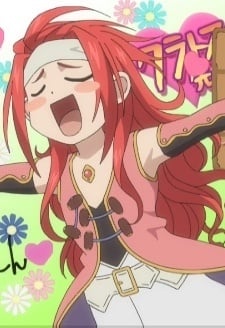 If you're looking for anime similar to Tales of Symphonia the Animation: Sylvarant Episode - Kaette Kita Kratos Sensei no Private Lesson, you might like these titles.

Tales of Symphonia the Animation: The United World Episode Specials

When the Arthurs are peeped on and groped, naturally, they blame Dancho. Can she convince the others of her innocence before they exile her for good?

When all the little sisters get stuck in Bad Ending loops, the CPUs must search far and wide for the cure--whatever dimension it happens to be in!

Villgust, a once-peaceful world, is now covered under a dark shadow. Monsters have appeared throughout the lands, and the inhabitants live in fear. However, hope is alive in the hands of eight warriors chosen by the goddess Windina! These brave souls, including Fanna the archer and princess-turned-warrior Chris, will do whatever it takes to save the world from evil. Their first challenge lies with Gavady, the leader of the monsters in a nearby forest. Armed with fierce weapons, can our noble (and somewhat strange) heroes save Villgust?

A childless woodcutter and his wife adopt Momotarou, a foundling child who springs from the inside of a peach. The super strong child defeats Lord Brindled Dog, Lord Monkey of the Mountain, and Lord Pheasant of the Moor, who agree to become his travelers companions as he sets out to defeat all the ogres from nearby island of Onigashima