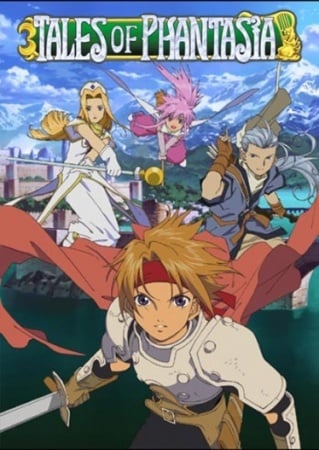 Cless Alvein and his party must stop the evil sorcerer, Dhaos, from destroying Yggdrasil, The Tree of Life.

Like many anime adaptations of video games, if you haven't played the original game, you will likely be confused as to what's going on.  Tales of Phantasia (ToP) has a bit of a video game flavor to it.  There aren't levels or experience mentioned, but you can see a basic RPG party among the characters.  Tank, healer, magic-user, etc.

Aside from all that, ToP is a very basic fantasy story, with the heroes trying to stop Dhaos form destroying The Tree of Life (and destroying the world).  There are no real twists or turns to speak of, and things end up just how you would expect them to.

ToP had rather unimpressive visuals.  The backgrounds were pretty nice to look at, but the characters didn't seem to fit in too well at times.  The character designs themselves were also not too much to look at.

The music is one of the high points of ToP, which isn't saying much, but the classic fantasy fanfares and dark dungeon tunes went well with the fantasy genre of the series.

The characters in Tales of Phantasia are your basic RPG party.  A fighter, a magic-user, a ranged-fighter, etc.  There isn't much of a backstory for any of them, and they all fit right into their little cookie-cutter spots (Not a good thing).  Viewers will find it hard to connect with any of them.

That being said, if you played through the game and already had a connection with the characters (or at least knew who they were) you could find much more enjoyment in this OVA.

This Anime Is... An Adaptation.  This OVA is meant to appeal to those who have already played the game.

Should I Watch This Anime? Probably Not.  If you haven't played the game, this will just be another stereotypical fantasy story, and not a very good one at that.  Even if you have played the game, you already know what will happen, so there's not too much purpose for watching the OVA, is there?