Tales of a Street Corner 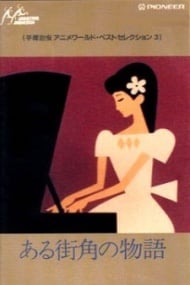 Life unfolds in the most unexpected places. Story of a Street Corner follows the bustling activities of a street corner, but not the ones you would expect. A hungry mouse, a moth desperately seeking the food caught in a spider’s web, and a love triangle unfolding between the posters lining the street are all depicted with an original musical score as the only sound.

StoryWriting about works like this is always a bit tricky, because the movie will at best appeal to a small percentage of the people reading this review. The challenge is always to make the show appear as repellant as possible to those that cannot and will not appreciate it, while at the same time recommending the movie to those that will actually like it. Essentially, this 1962 Tezuka short is not for “anime fans,” but “animation fans” – a subtle distinction to some, but a crucial one. Tezuka made the movie long before the stylistic distinctions that differentiate Japanese animation from the rest of the world came onto the scene. The heavily deformed character designs, giant robots and maid/schoolgirl/robot/whatever fetishes that the medium has become (in)famous for are all but absent. Many will disagree with me on this, but Tales of a Street Corner can hardly be described as “anime” in terms of what the English definition of the word has come to mean. Thus, there is little here that will appeal to the standard Naruto-loving, DBZ-hating anime fan. They’ll balk at the primitive visuals, the slow plot, and the largely experimental approach. They’ll wonder where the kawaii schoolgirls/super-powered shonen have gone, and why most of the “characters” in the movie are actually inanimate objects. On the other hand, a true fan of animation itself (one who appreciates anime not for its now commercialized mass appeal but for its occasional bursts of immense creativity) could very well love this. When Tezuka made the short, he was entirely unconcerned with profitability or broad appeal. Rather, he had his mind on something rarely seen today in the modern Japanese anime industry: creating art for art’s sake. As a result, many people are going to get hung up on the first 20 or so minutes of the short, which is basically nothing more than world building. I found the beginning vaguely charming and entertaining, but Im afraid most are going to become deathly bored by the time the actual conflict of the show finally arrives. By the end, the events in the show are clearly meant to be allegorical; obviously no one would care about the “lives” of posters on a wall or a tree spreading seeds if they did not represent something larger. In this case, they are used to show the effect war has on a community. As a whole, the storyline is clever, creative, and poignant. Basically, this is the reason people will like Tales of a Street Corner, assuming they like it at all.AnimationThe animation is certainly not on the level of sophistication that has become the norm in modern shows, but is also not without merit. Tezuka uses the technology at hand extremely well, and the visuals as a whole are extremely creative and tell the story well. For instance, rather than animate a walking soldier (who, with the animation standards of the time, would have looked marginal at best), Tezuka opts to show only the soldier’s marching boots. This image alone is enough to put the actual idea of a soldier in your head without getting caught up in the meaningless details. The result lends the short film a universal feel that works well with the allegorical approach of the story. Also, even though the actual animation is limited, the visuals themselves are colorful, vibrant, and nice to look at.SoundInstrumental pieces coupled with the occasional sound effect or two. As a whole, I thought the soundtrack fit the work well - no complaints here.CharactersTales of a Street Corner hosts a plethora of truly bizarre characters. I have already mentioned the pair of walking boots, wall posters and a tree. These are all major characters, and get about as much screentime as any of the more traditional characters in the short (a little girl and an assortment of Disney-esque animals round out the cast). As in most experimental shorts, none of the characters are particularly well developed, and many are intended to be symbolic. For instance, an intimidating poster of a mustached man in a uniform represents fascism, and the one human character in the show, a girl, is probably meant to represent childhood in general. The plethora of characters is used to develop the actual street corner in which they reside into a living, breathing character of its own. By the end, I felt an emotional attachment to the street corner in and of itself - an impressive feat, given the brevity of the work.OverallIf the audience can look past the unorthodox approach and the extremely dated animation, they’ll find a surprisingly profound anti-war piece that manages to say more with no dialogue than most shows (or this review, for that matter) could with ten thousand words. Unfortunately, this is a pretty big "if," and most likely only active fans of "the weird stuff" should consider this.

Historically-wise, Tale of a Street Corner is one of Osamu Tezuka’s best experimental films, while he was still loking for his own style of expression. That style came a year later with his Tetsuwan Atom anime, which pretty much established the basic anime characteristics for everybody else to follow. Thus this short film is nothing alike his trademark animation style. At the same time it is not even looking like it’s Japanese or Chinese like the previous animated films of his country; in fact it looks more like a European production. The characters and the music and the setting, all these take place in a European environment and as such it is easy to trick you it ain’t even made by Asians. Not that this is a problem or anything because it is an amazing piece of art no matter who made it.The characters of the film are numerous and weird in the least. We have mice, and moths, and a teddy bear, and a little girl, yet the focus is mostly given on poster characters… literally. We have a wall full of posters on it and the characters on it do all sorts of funny things, usually relative to the product or event they are advertising. So a big part of it is comical skits of posters, along with mice and a moth doing silly stuff. There is even some musical of sorts involved along with a man and a woman in different posters being in love with each other. There is far more than just that though. There is also an allegory in the form of a little girl trying to reach her dropped teddy bear as well as a red balloon in the sky; all symbolizing the search for a return to innocence as well as the need for progress and ascension. And in case you are wondering where the heck is that fitting with everything else, it also has to do with a third part of the film, which is the tragedy of war. All of a sudden the humorous feeling of the street is replaced by war propaganda posters, as well as many others being modified to advertise war and ideals of pride and superiority.Soon afterwards bombing takes place and everything turns to ruins or set on fire, practically destroying the once idyllic street. This is practically an anti-war message, showing the devastation strife brings to the daily lives of normal people and the contrast is presented bold enough to actually get emotional about it. It also ends with a sort of hope for a better future as life goes on through the ruins.The film is of course short and some may not be moved by all that yet I personally found it very direct and brilliant for its duration. I don’t think that prolonging it would have a better effect; in fact it would probably be less emotional. Adding to how artistic and allegorical everything is done without the use of dialogue (yes everybody is mute) and allowing music and motions to depict the whole plot in an understandable way and you have yourself a very powerful piece.The film is in practice artistic slice-of-life comedy before turning to an anti-war message in the end, thus it offers a lot of development and things to look at or think of. The animation is very lively for its time, the music is effective at inflicting you with emotions, the characters are clear enough to understand them even without talking, and it ends before you start to get bored with it. That is something most 50+ episode series are unable to do in general.There is of course very little story in it, the characters are just passively living the events, and it may even be criticized as naive anti-war propaganda for kids. All that still doesn’t detract from its compact emotional impact on you which excuses it for its short duration yet large amount of thoughts and emotions surging through your mind. It is very successful for what it aimed to be and still stands today as a good example of what animated features can be all about. Highly recommended.

Tales of a Street Corner is produced by Osamu Tezuka and uses a combination of living and inanimate characters to construct a story with a heavy anti-war theme. Sounds bizarre, right? Well, it certainly is and the first half is unlikely to get any other reaction than a few raised eyebrows and smiles as it introduces the characters and setting. Among the cast we find a human girl and her father; a moth; a group of mice; a street-lamp and finally a plethora of various posters containing a large variety of characters. These characters inhabit a street corner that, through clever development, comes off as an entity in its own right that the creators fill with life through musical sequences where all the "components" interact.  These sequences are enhanced by repetitive but infinitely cheerful melodies that are quickly replaced with far more solemn tunes when a mysterious person in soldier boots replaces the joyful posters with images of a man dressed in a military outfit and whose appearance is an obvious representation of a cruel dictator. Suddenly, the atmosphere of the movie ventures into darker territories as war breaks out and the characters do their best to survive. As far as conventional storytelling goes, the above is about as much sense one can make of it. A metaphorical interpretation is a lot more rewarding in this case and luckily for the viewer it's not a particularly complex one. It basically shows the horrors of war and the effect it has on a happy and functional community in a clever but simplistic way that children and adults alike can grasp. A large portion of the movie can be seen as more or less irrelevant but these sequences are made a lot more interesting by the insanely creative animation. Make no mistake, the artwork is heavily aged, but there are enough highly interesting visual quirks to compensate for that. In the end, Tales of a Street Corner isn't saying anything you didn't already know, nor does it make you ponder the eternally relevant questions of war. What it does do, however, is introduce you to a charming neighborhood that finds itself victimized by war and allows you to follow its struggle along with appropriate music and nicely done animation. It also makes you sympathize with inanimate characters without any verbal communication and only minimal movement; an achievement in its own right.