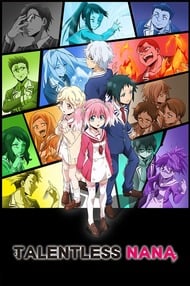 In the year 20XX, these teenagers with special powers attend specialized schools to hone their abilities. And then there’s Nana, who was sent to attend one of these schools but doesn’t actually have a unique ability. Can she defeat the Enemies of Humanity with her brains and wit?

(SPOILERS)Talentless Nana, its a story about murdering people with superpowers that is unkillable by a normal person.Yet Nana a person without anypowers has gotten the task to kill these people. So she has to use any manipulative skills in her arsenal to achieve this. Story 7/10The first episode sets the mood of what we are going to see, we are first introduced to what seems like our Mc and then we are laiter introduced to Nana, and we see them building a bond just for her to kill our fake Mc and becomes the real mc. Let me remind you all of this happened in the first episode. The story is good and has alot of plots and twist, and this type of genre ''a traiotour among us'' is really new ive only seen it once before in the anime series '' Rokka: Braves of the Six Flowers''Eventhough it's a new genre, it has alot of flaws. An example could be that shes actually exposed alot as a killer but individual, and those people are never spreading that Nana is a killer which is unlikely to happen. (i would have told anyone if i knew who has been killing people left and right)And it feels a little bit repetitive with everyone exposing her individual.Animation 8/10The animation is good, i dont see any flaws and it lives up to the 2020 standards. I especially likes that it sometimes shows Nana's ''two faces'' And i like the expression it has to some of the faces of these characters.Sound 8/10The intro is good, and the outro. The voice acting is spot on. Characters 8/10Alot to say here, the fact that we can see both perspective of nana and the one being hunted/killed by nana, is just perfect cause we can see both sides of the stories. We can see why Nana wants to kill them (eventhough i belive Nana herself is being manipulated into killing them) and we can see the other characters stories and confucion as to why they are being hunted/killed by this ''cute'' and freindly character. The interaction of Nana and Michiru is really complex, on one hand we have a schemer and on the other we have a simple pure girl, and episodes 12 really showed their relationship being experimented on.The character developement of Nana is slow but good once it hits, and it really shows how one person can change someones life.Overall 7.5/10Ever trusted someone? just for them to yeet you out of a cliff? Welcome to Talentless Nana(My bad for any misspelings or wrong grammars) (Also the 2 last episodes were amasing i hope this gets an season 2)

I am really surprised to say that this series was actually quite decent and this is despite what people think of it saying it's boring, etc which I totally disagree from my personal point of view. Yes it's not a masterpiece or original but it was far from boring for me, it was in fact, interesting enough! Anyways, the story goes that a secret serial killer/spy called Nana basically kills anyone who is the enemy of "humanity". Of course she meets unique students who have different personalities such as Michiru and Kyouya. Michiru is a little darling like she cares about Nana so much and yet Nana is a bad egg who's suppose to kill her lol. Kyouya on the other hand, is a smart lad who's pretty wary of Nana and he always is attracted to detail in order to track the killer. While you're watching this, you do get the atmosphere of "who done it?" or " Is Nana gonna get caught???? " like the show is good that way to have your nails biting through the end lol. By the way Rumi Ookubo absolutely nailed her performance as Nana because she was able to put a performance on a "serial killer voice" to a " sweet cutesy girl voice ". Both these types of voices were totally on point. By the way without trying to spoil it, the ending made me cry man! You should definitely check out this mystery horror series, as I said before, it's really a decent show of 2020 that I've ever watched!

Due to the nature of the series contains spoilers for the first episode. Coincidentally with popularity rise of game Among Us, we’ve got a series, which could be tagged as Among Us the animation. The first episode throws you of guard, because it purposefully presents as school-life series with super powers. It does so quite convincingly, but it does hint in the beginning what is the series about. I have to admit it did slip out of my mind and tricked me into thinking it’s just another of that kind of building friendship series. Good, job Mr. or rather Miss impostor. The second episode does show what is the real gist of the series. Let’s us not kid ourselves. While the premise of people abusing superpowers and being really dangerous to world and society as whole is completely fine, the way how to deal with such people, that serves as justification for the whole plot, is just dumb. Instead of just disposing quickly and effectively of people with super powers, there is this really elaborate way of sending them to an isolated island, where there either kill each another or just to be safe, the government sends its agent to ensure they are all killed. Plus, it’s quite risky, that the whole thing might be exposed in consequence it would be way easier to just “euthanize” the kids in hospital. The whole ordeal could be easily avoided. This does lower the whole experience for me already. There is one big “but”, because it isn’t certain this explanation given by the main protagonist Nana is true. Or pretty much anything she beliefs is true. However, the anime doesn’t show in its 13 episodes either way. It’s mere speculation at this point. Probably the closest series to this is Death Note, because this is after all about plotting, scheming and avoiding to be caught by others. In that spirit Nana is Yagami Light and her antagonist Kyouya is L, who does suspect Nana and does his best to expose her as murderer. If I should pick something that could be better. It’s the fact, that most of Nana’s victims are evil or presented in the end as such [1]. It would be better if there were more variation and viewers could more readily question, whether her actions are really justified or whether is she just fed propaganda from her superiors via the messages containing estimates. When I’m thinking about it, having such messages in the phone is unnecessary risk and so is having the phone as a channel of communication. What if you have someone with ability to intercept phone signal or hack your device. The series does to try be smart like Death Note, but it does have holes in the narrative and it feels more like luck, than actual skill, when Nana manages to avoid detection or avert suspicion a bit. Does she? Pretty much with main antagonist Kyouya she is “sus” nonetheless. If I should point out one thing the series did good is its direction towards the end in regards to Nana. It steered the show in direction, that made a better overall impression albeit it downplayed the scheming element in return. Animation is ok, not great. Soundtrack, OP and ED ok. Nothing special I would care much about. The series is leaning more to be good [2]. If you enjoy thrilling sensation of series like Death Note. You may enjoy it. If you are approaching everything in very analytical manner and your threshold for suspension of disbelief is very high, you are likely to find the series lacking. It’s probably one of the better series of the current season so, I would recommend it. Spoilers [1] The good thing is they didn’t do it with Michiru, but then she conveniently sacrificed herself so she poses less significant issue for further development. [2] I was thinking about what makes or breaks the show is the ending or further development. If there is some shift like having change of heart or having to make alliance with the enemy of humanity. They sort of did went to this route in the last episode, but it ended suddenly with Michiru’s death. The ending is pretty much open for further episodes. 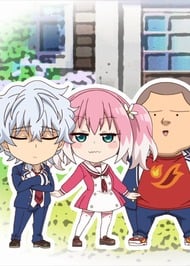