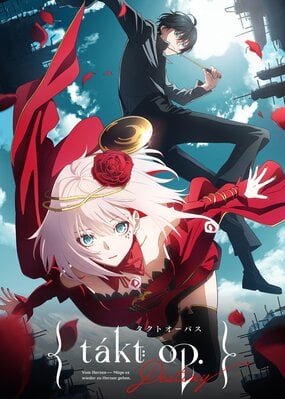 One day a black meteorite fell on the world, and the world completely changed. The meteorite produced grotesque monsters called D2, which started running rampant. D2 very quickly banned all music, which was the one thing able to overcome them. But there were some people who resisted the D2. They are young women who hold the power of music, the "Musicart." These young women hold "scores" that are able to defeat the monsters. And there are also people who lead these women, the Conductor.

EDIT: That ending was a joke. WTF. Downgrading score from 5.5 to 4. It literally got worse. Our antagonists were already bland and lacking any kind of interesting backstory or motivation, but now it's progressed beyond a new level of stupid. I won't say anything else b/c I can't without spoiling things, but I laughed out loud when the final boss battle started. --- TL;DR - Looks and sounds pretty, but otherwise not great. Animation is pretty, music and voice acting are good. The battles are very well done, enjoyable to watch. But everything else falls short in two areas, which are arguably the most important - story and characters. Story is uninspired, to be frank. The premise is that one day a bunch of monsters (D2s) invaded the world, and they respond to music so people can't really play music anymore. Except Conductors, because they have Musicarts that are basically weaponized humanoid songs (???), and they can fight the D2s. So those Conductors + Musicarts were able to push the D2s back, and life was just starting to go back to normal, and then... boom, they're back. Cue our main characters traveling to learn about themselves and fight the D2. We don't know what's gonna eradicate the D2 permanently. It's still unclear 8 episodes in where Conductors and Musicarts even came from. The world exists just because. I still haven't figured out what the main conflict is because we keep getting side-tracked by all these dumb things, like eating sweets in New York or battling narcissists. There's something about this that is just so, so uninteresting. I literally can't muster any energy in me to care. To make this uninteresting premise worse, the characters are dumb. And annoying. Destiny is composed entirely of just two character tropes - the glutton (loves food, only talks about eating), and the aloof (socially awkward, can't read a room). Takt, our male lead, is composed also entirely of two tropes - the enigma (mysterious with a traumatizing past a la Sasuke), and the tunnel-visioned (so singularly focused on one thing that he's a detriment to himself and others). Nothing's wrong with any of these tropes per se, aside from being used a little too often. But the way they're used in this particular anime? Bleh. Watching Destiny and Takt interact with each other is like pulling teeth. I've seen pornos with more fleshed-out characters. And you could even tell the writers knew they screwed up - on episode 8, it's like the writers realized how boring and contrived their characters were and suddenly there was a flip-flop; Destiny starts expressing care and behaving like a normal human again, which made her 100x more likable, and Takt now realizes Cosette meant so much more to him and for the first time, he, too seems human? Episode 8 by itself would leave you thinking you were watching an entirely different show. But alas, in episode 9 they're back to being the same glutton and tortured artist duo. You know how in a good story, things are shown instead of explained? Well this show doesn't do that. They literally had to explain that our main characters have matured. Lol ok   The only real "villain" we've encountered so far is some pompous, comically arrogant ass who thinks he's the messiah reincarnated. No interesting back story or motivation, he just thinks he's awesome. He's trying to give our main characters a hard time because they didn't agree that he was awesome. I kid you not, that's the conflict - this guy is trying to kill our MC because he refused to work under him. No one f*cking cares. I can't even bring myself to hate him as a villain, he's just dumb. Even the bystanders/townspeople aren't believable as people - they're just there for the convenience of having an audience. In the first episode, one minute someone's playing piano and the next minute, their entire town is destroyed. But then at the end of the episode, Destiny is shown stealing the town's piano and people continue about their day as if several hundred of them didn't just get torn apart the day before. Overall There's this growing pandemic within the anime & video games industries where everyone puts all this attention and energy into appearances and production values, but character progression & storytelling is an afterthought. The beautiful visuals in this show are totally wasted on the writing.

Not the worst thing I've seen but distantly far from the best.  Art style is pretty bland but workable.  I've already seen 100 other anime drawn just like this.  It's not that it's bad, its just cookie cutter in that regard.  The action scenes are well animated, so that's a plus. The characters in this are very clichéd and predictable. Standard emotionally blank girl, tortured artist and a tag along to keep them glued together.  The character growth felt forced and sudden.  We're talking about going from not understanding the concept of a house and why you shouldn't destroy it, to giving up your candy to a crying baby.  wtf? That's not something to just magically jump to.  In the same vein, this anime will constantly skip over any consequences associated with their actions.  Essentially, We're being denied the ability to empathize with these characters or understand how they grew. The standard baddies are mindless. So ok, we get to watch some pixels die. Then there's the intelligent baddies, which are ham handedly plunked right in front of us.  I actually started laughing at how poorly wrote they were.  clichéd af. We also get their standard bad guy monolog cause they didn't feel the need to show ANY of their motivations leading up to that point however we've already seen so many scenes foreshadowing that they're evil. The story and premise is probably the best thing about this anime, so far.  it's absurd and it's what drew me in.  creatures that hate music is  ridiculous and I love it. This anime doesn't know what it wants to be.  Does it want to be taken seriously or doesn't it? It can be quite jarring to watch as they go from heavy to light and then back again in seconds. Who would I recommend this anime to? People who've seen less that 40 anime.  A younger version of me would of enjoyed this a lot.