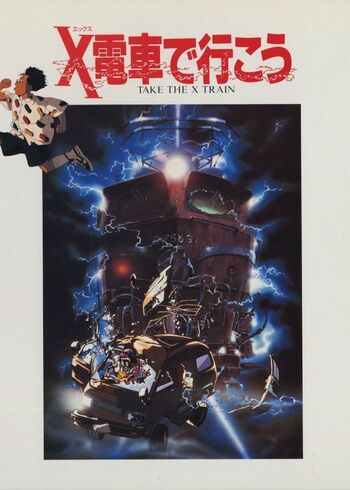 In kindergarten, naive Mitsuko began to think of Yoshioto, who was staying at her house, as her papa. And she vowed that she would be Yoshioto's bride when she grew up. Can this dream be fulfilled? In the journey to see him, she slowly understands her own feelings and her heart that refuses to mature, but nonetheless thinks she's already mature. In her search, they gradually melt into one.

1968. Germany, a Japanese student of a rich family, is about to graduate and marry his girlfriend Clara. But, one day, an UFO falls down their mountain's chalet, shifting their life.

Geeko's weird, creepy, friendless classmate Nero has destroyed all of their mutual classmates, perverting them into her grotesque, monstrous minions. Now she's sending them after Geeko, the only survivor. However, Geeko is setting out, dressed in her skimpy school uniform and armed with a big chainsaw, to end Nero's mad science, no matter how many undead former friends she has to saw down on the way.

Giovanni, along with his best friend Campanella, boards a train traversing the Cosmos and sets off for a mysterious new world. Kenji Miyazawa's timeless literary masterpiece illustrated in manga!

There's a legendary killer stalking the street whose name comes from a monster of our nightmares, one that emerges from the shadows to feast on the evil-doers. And tonight, he has his sights on a gangster who has a trick up his sleeves too.