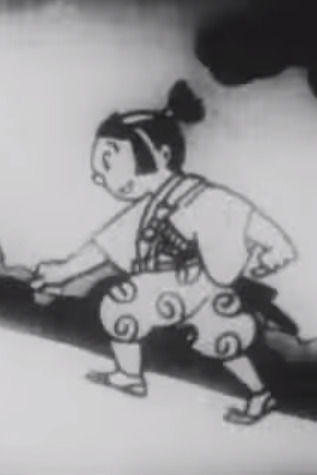 If you're looking for anime similar to Tairiki Taro no Mucha Shugyo, you might like these titles.

One day, an old man goes to the mountain while an old woman goes to the river – and there she finds a magical surprise: a giant peach! After taking it back to their house, the two are even more surprised to discover that the peach bursts open, revealing a bouncy baby boy inside. This boy, Momotaro, grows and matures to be an outstanding young man, capable of even fighting demons!

Both of these early animations depict men battling with Japanese demons, so if you liked that in once, you may want to try the other.

Toriko is incredibly strong. The Samurai in

Tairiki Taro no Mucha Shugyo is incredibly strong. Both are short, and both can beat even the craziest beasts, men, or demons.

Looking for an overpowered main character who finishes all and any of his problems with punching bad guys in the face? Look no further! Both these shows feature a somewhat similar narrative even if One-Punch Man is set in a somewhat more contemporary setting, whereas Tairiki Taro no Mucha Shugyo has a mythical setting.

A turn-off could be the show's length (2mins compared to 12 full lengths eps) and date of publication of the shows (1928 vs 2015). If you're a sucker for the old stuff, you might not like the modern and polished look of One-Punch Man. Similarly, if you only watch the newer stuff, this older show might not appeal to you much. Production values are probably somewhat lower too.

A man wanders, inevitably getting involved in situations where he goes. From the mountains to hillsides alike, he sees beautiful scenery and takes naps along the way, only to find a cruel sight: a mean man threatens to shoot a poor monkey and its child in a tall tree. The man stops the other, and the monkeys insist upon repaying him for his kindness…

Against a backdrop of the Japanese national anthem, patriotic images are shown, from Mt. Fuji to the sea of Japan, to the country itself and beyond.

Issun-boshi, a miniature boy, bids his parents farewell and floats down a river in a soup bowl with chopsticks for oars and a sewing needle for a sword. Now on a grand adventure, Issun-boshi meets a princess, battles a demon and saves the day!

Muku no Ki no Hanashi