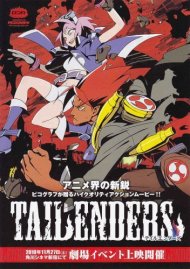 Terulus: a world destroyed by a haywire terraformer where destructive earthquakes, constant danger and wildlife mutations are a fact of life. Those who survived built giant mobile cities to withstand the tremors, and pass the time with dangerous, no-holds-barred races – the same races that caused the famous champion Loser King to go missing a hundred years ago. Determined racer Shiro Tomoe wants nothing more than to live up to the Loser King's legend, but a terrible accident leaves him nearly dead – that is, until Tomoe, an inventor with her own motives, replaces his heart with a prototype engine. Now, Shiro's performance is tied to his very heartbeat, and success, or failure, will determine his fate.

Story: 8 Tailenders is a short but fast-paced, bad-ass animated film that will rock your socks! When it first started, a narrator gave some background on the history of the planet, Terulus, and it's mishaps with a terraformer gone berserk or haywire. Soon after, the scene jumps right into the actual story, quick and qithout hesitation. There isn't much of a plot, other than that Shiro (the main character) wants to fulfill his dreams of surpassing the legendary "Loser" racer. Unfortunately (or fortunately) for Shiro, he finds himself in a pretty bad accident which nearly claims his life, but allows him the chance to fulfill his dream. Shiro is then entered into a race that even the "Loser" never finished and the real adventure begins. The story could have been expanded on a LOT, and it's so fast-paced that you really have to pay attention the whole time lest you become lost. There isn't much else I can say about the story, I wish the writers had made more than just this one, but beggars can't be choosers uless their rich, which would be unusual. Animation: 9 I love the animation in Tailenders. THe style is real gritty and the colors are all in high contrast which really works for the way everything is drawn. It's as if the artists decided to put a lot of effort into some things and half-assed others depending on how they fit into each scene. I don't mean like how in some anime the things that don't move are really lightly colored or have no sharp or thick lines while the opposite is true for the things that do move. The characters designs make me think of FLCL or Eyeshield21, while the landscapes look like something out of Akira, and the vehicles and hardware all remind me of something more retro-grade than all of the above with their sharp lines and geometric shapes. Sound: 9 The music tracks and voice actors all did spledidly. Every characters voice fit their profile and the sound effects for different types of actions and machines were chosen well. Being that I am not an officionado on sound, I will give this section an 8 based on the fact that I liked everything I heard, except when a couple of the characters were grunting (it was just weird) and when a couple doctors were shot with tranquilizers.   Characters: 7 Shiro was developed well enough in the super-short amount of time allotted. He' is a head-strong, will-powered, race car driver. Tomoe is not only the enigma character, she is also your typical mad scientist type, but with that sexy female strut and body, as well as her sharp mind, she is easily the most interesting character out of the bunch. The antagonist, Goodspeed, is almost a side-character, but you can tell that Shiro and he have a history with each other. There isn't a whole lot of development, and at one point during the last 4 minutes I was pretty baffled by her actions. By the end of the film I had a much better understanding of how she felt at that baffling point, but it sure caught me off guard. Overall: 8.5 Overall, the Tailenders film could have been much longer and would have, perhaps, benefited from a little more material. However, I love this title. I'm going to archive it right next to my favorite animated films to watch again sometime. I hope that anyone that takes the time to look up this film will find it just as entertaining as I did. Enjoy!

Back in 2009, when Redline was released, it got a lot of praise and attention for it’s fantastic animation and artstyle as well as it’s great fast paced action and colorful characters. But there was another similar highly stylized and fast paced racing anime that was released around the same time. That went relatively unnoticed due to the attention that Redline was getting. That anime was Tailenders, released only two months after Redline.The plot takes place on planet Terulus, long after terraformers were used to try and repair the environment, only for them to go haywire and ravage the surface of the planet for centuries, creating mutations to the wildlife and devastating earthquakes. Because of this, giant cities that could drive around the planets surface were created to house what was left of the population.One of the biggest past times is a racing competition. The dream of every racer to beat the track records held by Loser King, who disappeared a century ago. Shiro, one of the top racers, is horribly injured by a stampede. A mysterious woman walks in and offers him the chance to race again by replacing his heart with the engine from his own car. Soon, Shiro finds himself trying to win the Planet Redevelopment Race and try to beat the Loser King’s record times.Even though it’s not much longer than the average episode of a TV series, Tailenders tells a satisfying enough story in it’s run time that i didn’t really mind it’s length. Sure, it’s not going to have a lot of character or story depth, but Tailenders wasn’t trying to have that. The characters are well defined enough within the constraints of the short that all of them are enjoyable despite their simplicity.The short’s world definitely feels like a world despite simply being a setup for it’s plot. Tailenders wants to tell a simple fun story and it does it pretty well. I wish it was slightly longer so it’s pacing could be a bit better, but it’s a minor issue. I can’t really talk about the plot beyond the initial premise since it’s less than 30 minutes, but it was satisfying for what it is.The art and animation is top notch. The artstyle is a little more over the top than Redline’s, which helps differentiate it enough from Redline that you won’t mistake them from each other. I could see how it could grate on someone more than Redline’s artstyle, as it seems less refined. But it comes down to personal preference, and i had no problem with it.Tailenders didn’t have the budget or development time that Redline did, and it doesn’t quite reach the peaks that Redline did, but it does fit a lot into it’s scant 27 minutes long running time. It also didn’t recieve quite the same attention either, which is a shame, because Tailenders is definitely worth a watch, as it’s can be just as fun as Redline.