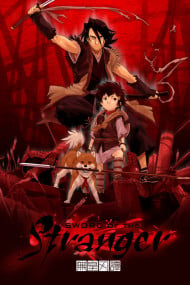 StoryIt's a real shame that Stranger - Mukou Hadan is regularly compared to Seirei no Moribito; it means that, all the while I was watching, I couldn't help noticing how deficient Stranger is in comparison. Although it starts off fairly strong with an action-packed opening sequence and a character dynamic that is full of promise, it fails to keep that level of quality and becomes progressively weaker from about twenty minutes in. Easily the narrative's biggest failing is the lack of surprises - the story unfolds from start to finish with the ingenuity of a bus timetable. The good news is that there are a handful of fights along the way to alleviate what would otherwise be a below-average movie; the bad news is that, unlike productions such as Ninja Scroll, there aren't nearly enough inventive ones to boost its entertainment value beyond the ‘decent' mark. Worse still, after events have run steadily in a certain direction, Stranger randomly decides to tack on a military battle; considering this event has no prior build-up at all, it presumably exists just to kill off several minor characters in a series of gory fights. Annoyingly, this contrivance only has the effect of completely overshadowing the already weak character development.AnimationNo matter what its faults, Stranger is undeniably a good-looking movie; it offers well-accomplished backgrounds and several eye-popping action sequences. Unfortunately, I have also seen movies of the same era with stronger atmosphere (Kara no Kyoukai), more enchanting detail (Piano no Mori), and more stylistic flare (Tekkon Kinkreet) than this one. The result is that Stranger still feels like a well-budgeted, straight to DVD movie rather than an all-out splurge of studio money made for the big screen. For example, although the backgrounds are excellent, none of the scenes provide any mind-blowing pans of sprawling countryside to allow the viewer to appreciate this animated lushness; furthermore, Stranger has an uninteresting colour tone, with every scene washed in the same dull blue/grey/brown hue.SoundI have no complaints whatsoever regarding the voice acting spoken in Japanese, and am particularly pleased with the vocal performance for Nanashi. However, there are several instances, when the Japanese actors have to speak Chinese, which to my uneducated ear, sounds as awkward and weirdly paced as Engrish. In particular, during a scene when Kotarou and Rarou are having an intense confrontation, the sound of stilted Chinese robs the performances of some emotion. As for the soundtrack, the use of intense orchestral music works well to enhance the atmosphere, although it is not very memorable and certainly not worth buying (unless you happen to like nondescript orchestral music that sounds like every other Hollywood soundtrack ever composed).CharactersNowhere is the difference between Stranger and Seirei no Moribito starker than with the characters; while Stranger promises a similar sort of relationship between its two protagonists as Seirei no Moribito's, it never pays the same attention to character development. Balsa and Chagum are original, multi-faceted, and share an intensely watchable relationship across twenty-six episodes; Nanashi and Kotarou, on the other hand, are mere twists on stereotypes, familiar and yet mildly engaging for their two-hour adventure. What also doesn't help is that, while the antagonists in Seirei no Moribito are not necessarily evil, in Stranger, the bad guy is nothing but. No convincing explanation is given for Rarou's behaviour - the only clue he provides is that age-old drivel about wanting to fight strong enemies. Needless to say, this makes for a rather predictable and one-dimensional emotional conflict, as pacifist Nanashi pits his skills against war-mongering Rarou. However, of all the let-downs, the biggest has to be in regards to Nanashi himself: his origins and his former career as a soldier are emphasised as key to his personality, and yet they are left totally unexplored. Considering the mystery of Nanashi is Stranger's main hook, this failure to deliver not only leaves me feeling cheated, but also unsure about what ultimately motivates him to develop from reticent warrior to kick-arse hero.OverallFleetingly enjoyable, Stranger - Mukou Hadan has no real rewatch value. There's little to say except that it provides some fantastic action sequences, but fails to deliver on a convincing plotline and engaging character development. That said, for those looking for an easy-on-the-brain movie with some outstanding samurai action, I recommend picking up Stranger - Mukou Hadan as a rental... or maybe just skip that and go for more satisfying alternatives like Ninja Scroll.

The movies I had watched previously were often connected to a excisting TV show, they were never as good as the series itself. The movies were usually additions to the series or some filler material. And the few stand alone movies Ive seen werent that good either, in my opinion, mostly because it is hard to fit a story as good as a TV show into a movie of merely 2 hours. So I was pleasantly surprised by this movie. It still doesnt have a top notch story, it is rather cliché and lacks dept, but the movie grabs your attention from the very first minute and doesnt let you go till the movie has ended. Story/CharactersWell...''boy in trouble meets helpfull samurai'' is basicly the story. Very basic and cliché but sufficient. They could of add another 30 minutes for some more dept altough that might have a negative effect on its pacing. So the story is simple but there are tons of blockbusters in the theatres which have even less of a story but are just as entertaining.The same applies for the characters, Kotarou and Nanashi are cliché and basic but again sufficient. You get just enough information to understand their backgrounds and their problems. Just enough time is taken out to see them bond with each other so we understand why the samurai wants to help that desperatly.The secondary characters get only a minimal (couple of minutes) screentime on their own just to explain their reasoning for their actions. Its just straight to the point ''I want this'' ''I like this'' so they can fit in the story. Animation/SoundThis couldnt be any better. The animation is simply amazing, even during the action scenes. It is easy to follow everything and its not hidden in some shadowy area like some other movies/series tend to do to hide the imperfections. The fighting choreography is simply amazing. The soundtracks and animation can easily be matched up against some of the big Hollywood studios like Disney/Pixar, altough this movie is for a older audience because of its violence. OverallEven though the story and characters are minimal and cliché this is an higly entertaining movie. Let yourself be be swept away by the movie, the action, the animation, the sounds and the characters.If you like deep stories and plots then this movie might not be something for you but if you want to enjoy a good action movie it would be a shame to skip this movie.

I wish you could put a value over 10 for the animation in this movie because DAYUM. Some of the best fighting sequences I have EVER seen, and hands down the highest quality consistent animation I've seen in a while. Definitely one of my top favourite movies of all time, animation or not. Also I appreciated the unique integration of Chinese and Japanese with the voice acting. Amazing!!! 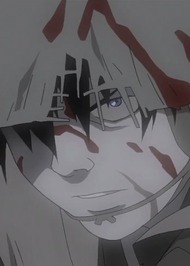