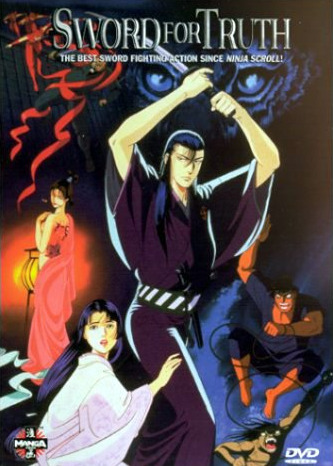 The front cover of Manga Entertainment's Sword for Truth DVD boasts "the best sword fighting action since Ninja Scroll!". Manga execs, I just have two questions for you: what were you smoking, and where can I get some?

It's hard to describe the plot of Sword for Truth, since the plot boils down to a trainwreck full of ninjas. I'll try to sum it up in a nutshell: guy who is so-convincingly-badass goes around killing people (why, BECAUSE HE CAN AND HE'S A SAMURAI, duh). Guy then ends up being hired to save a princess. Along the way, guy encounters 57 different groups of ninjas, most of whom are just around long enough to either get killed or kill other ninjas, before also getting killed. Oh, and add a bunch of undead ninjas, a large invincible guy and plenty of random gratuitous sex and you have the entirety of Sword for Truth.

Granted, I'm not a fan of Ninja Scroll, but comparing Sword for Truth to Ninja Scroll is like comparing McDonald's to a gourmet restaurant. A gourmet restaurant has delicious food and drink (though usually not involving ham sandwiches, alas!), a sense of ambience in the dining room, and good company. McDonald's has hamburgers made out of god knows what parts of what animals, tacky plastic booths and a lowest common denominator population. So I ask, which one would you choose? If you'd go for McDonald's, and also love seeing 57 groups of ninjas randomly killing each other, then you'd adore Sword for Truth.

For the rest of us with the smallest amount of sanity, Sword for Truth is essentially useless garbage. Let's start with the plot: well, it's garbage. As previously mentioned the plot is a poor excuse for a bunch of ninjas to go around killing each other. You know what would have made the plot better? A fan dub. Another option would be to tape pictures of monster heads onto the TV. Then, when all of the ninjas are running around killing each other for the 819th time, any time a ninja lines up on the screen with one of the monster heads you could laugh out loud and exclaim "Haha! Look at that silly ninja with the Godzilla head!" Endless entertainment for all ages! Let's see, what else is worth mentioning? There's plenty of gratuitous random sex thrown in, the pacing is like a roller coaster ride, and the ending is horrendous. What's not to like?

I'll cut right to the chase: Shuranosuke has one of the most unattractive character designs ever. Why? Because he has what appears to be a SAMURAI MULLET. The animation otherwise is terribly average and is filled with plenty of still scenes. The two most noteworthy things to mention would be the violence and the nudity. The violence is plentiful and involves many lost limbs, and the nudity is tasteless and random.

As with the animation, the music was completely forgettable in every way. The voice acting was decent enough.

Well there are the ninjas. There's also some other ninjas, and yet more ninjas! Does anyone else even matter? Shuranosuke is a silent "badass" who basically goes around killing and having sex with everyone. He reminds me of the lead singer of Type O Negative; that is, if the lead singer of Type O Negative had a ninja mullet. There is zero character development and a complete absence of interesting characters in general. I would have paid good money for a pirate to make an appearance and rile things up.

There are two quotes on the back of the DVD box: "Non stop action... masterful swordplay" and "An action-packed portrayal of warring ninja factions... quality action adventure". I have a few sound theories about this complete lack of taste:

And there you have it. Sword for Truth, using the acronym SFT, could better be titled "Such F'ing Trash". I’d really like to say this movie was so bad that it was good and worth watching just for the laugh value (such as Baoh or Psychic Wars), but alas, I can’t. There is nothing redeeming about this movie whatsoever. Do yourself a favor. Preserve brain cells, don't watch this anime!

This OVA is by no means bad, but it has a few problems. The story is as follows, a lord's daughter is kidnapped and in exchange for her life the kidnappers want the silver sword. To complete this mission a passing samurai is hired. While looking simple at first, the story has a depth that is unraveled as it progress and many third parties become involved in the conflict. The problem is that the story ends abruptly and while everything is more or less solved, many new plots are introduced right at the end, clearly signaling for a part 2 that is nowhere to be seen, unfortunately. Despite what the other reviewers said, believe me, this is the only problem with this OVA, it makes you want more and leaves you hanging.

The character design is adequate for the story and not bad at all, the animation, on the other hand, is average at most and at no point a specific scene is animated with an improved quality. The battle scenes are done realistically despite the fantasy elements and I guess this puts off some people. Efficient killing techniques are not always fun to watch.

The characters are the high point here, every character is interesting and keeps getting more interesting as the story goes on. What some people don't seem to understand is that they aren't your average happy go hero with flashy techniques that can be resurrected, they only have one chance to kill or be killed.

All in all, I would recommend this OVA to those people that like manly stories with quasi-realistic battles instead of the flashy shonen stuff (you can like both). That being said, bear in mind that you will want more of it and it won't never come to fruition :(