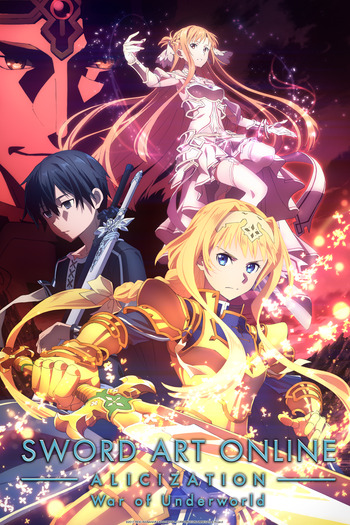 First half of the War of Underworld. In first.. animation and sound is beautiful and you will feel those fights. You will enjoy this story with those new characters, especially Integrity knights and Dark Territory leaders. It will be sad, funny, serious. You should watch it!!

You know, SAO is like that retarded kid we used to bully after school, as times passes that retard grows and now can wipe his own ass half way through, some people call that masterpiece others point out that this is still a retard and that there is still shit on his pants.

I think this easily summarizes 'Alicization - War of Underworld'.

SAO have the worst characters you can imagine, and this is not a breaking news to anyone, Alicization suffers from the same mistakes first two season suffered, mainly Kirito, Asuna and poor direction and character development.
this Arc is full of cliche SAO crap, "Yelling makes attack smarter", "no hero dies", "one dimentional villains and heros", "plot holes", "girls want only kirito".

Alice is literally the copy and pasted Saber from Fate Series, i mean it, but i'm gonna let this one slip.

Let's talk about the plot, so the villains are after Alice, but why? Asuna says because she broke the rules ergo she is a true AI, let's talk about how fucking stupid it is that japan's military is looking for an AI that can breaks the rules!

Why the fucking fuck would they want a fucking solider that can break the fucking rules they fucking gave her?

It makes absolutely no sense, let's say for some reason they want that, why didn't they just stop the project the moment Alice broke the rules? isn't there an alert or something that can notify the programmers? (if they can't for some unknown reason then it just shows how fucking retarded it is that programmers weren't prepared for this)

Also it is pointed out that time is passing faster in Alicization, why? because we said so, if time is relative then why not speed up this stupid Super Secret project that a high school girl could find out about?

The warriors from Dark territory need one thing to be complete, a "Dark Skin" and "Monster" and "Ugly Bastard" tag, they look fucking disgusting.

The only character i had a little respect for was Alice because she wasn't after Kirito's asshole to lick it, that was the only reason i respected her a little but don't get me wrong, she is a garbage character, she is the most generic warrior i've seen, nothing about her is memorable, i'm gonna forget about her after this review probably

It is a bad anime, wasted my goddamn time again

In short, if you're looking for SAO's "redemption arc" like me, don't waste your time here . If you think that Gamers are oppressed and should rise up, go ahead and watch it.

I was actually getting immersed in the story, helped by Kirito being a vegetable sitting in the corner and letting the much more likeable Alice take the stage but they had to completely nuke the atmosphere in the second to last episode and annihilate the enitre world building set up so far.

It was already cringe enough that the cool and composed somewhat intimidating military contractor villian turned into an insane child murderer who literally eats the souls of people somehow (even in the real world) as soon as he enters the vr world.

But when they somehow summoned tens of thousands of faceless braindead players into the world - who just stand around waiting to be cut down 10 at a time by important characters - and turned this real feeling world with stakes into another dumb mmo game I lost all hope.

So much for this world being special, all of a sudden they don't need the special STL machines to transport their souls into the "game" and anyone can just log in with any old vr tech. Why or how a secret military installation in the middle of the ocean would be connected to the internet so anyone could just log into their secret research simulation world is beyond me. When the mercs took over the facility they even said they can't look into the world through video to look for Alice because they can only see the world if their souls are plugged in, sounds pretty different from the old vr headsets (altough somehow they have a constant video feed on their huge monitor in the control room that can be seen in the opening every episode).

Then Lisbeth gives a speech about how oppressed Gamers are and they literally have a Gamers rise up moment. No anime has ever devestated me so much before, completely invalidating my investment in the story so far. I expect the worst from the follow up season once the lame fairies get summoned into the war with their overpowered game characters. I've already got a sneak peek when Sinon entered the game and wiped an army of 20 thousand with a single shot. At least Kirito actually had to train and level up in the previous season, now every player is a god from the get-go.

My disappointment is immeasurable and my day is ruined.

Hours of raiding in the company of friends, stage-by-stage pumping, creation and association in guilds, epic PVP duels - all these things are classic for the MMORPG genre of enticement. A potential new audience, reading the lines full of pathos, begins to involuntarily shudder in convulsions, nervously fidget on a chair and think about how cool it all is. Anime Sword Art Online has about the same effect on a person. But if you go to the next MMO you will not see anything outstanding, then SAO will certainly keep its promises. Here is one of the best anime of 2012!

What a marvelous and new world opens in this anime beginning of the 21st century. The first game is being developed that makes full use of the capabilities of a neuro-drive - a device that immerses a person in perfect virtual reality. Code I watched this anime how I wanted this game to exist in reality, so that I could escape from writing my compare and contrast essay. And all would be fine if this game was not MMORPG. For tens of thousands of gamers, this has become the main event of the new century. Just imagine: plunge into a fairy-tale world where love, anger, joy no longer depend on pressing the buttons on your keyboard, where the comrade next to you is no less real than the mouse lying in your hand, where, it seems, even in soulless mobs lively and genuine feelings and a wild desire to live. What would you be willing to give in order to go there at least an hour? Much, I'm sure.

The protagonist of the series - Kirigaya - a typical representative of the next generation of gamers. He is asocial and closed, the world of Sword Art Online (that’s the name of our game) and communication in it is much closer to Kirigai than the obvious alternative. Despite the notorious reliability, social relations in the game are much easier to build than in reality: people are hiding behind avatars, and any acquaintance can be interrupted by leaving the game. And everyday life of our hero stretches: school - home - virtual space. But once the idyll of Kirito (nickname gg) comes to an end. The creator of the world collects all the players in the main city and informs in a calm voice that now you can exit SAO only after passing it completely. Ah, yes, another condition: death in a game is equivalent to death in reality. Avatars disappear, and they are replaced by real faces and bodies of people. Someone is beating in hysterics, someone is crazy with happiness - only here he is worth something, someone is already on the verge of suicide, and Kirito, he ... he just has to go through the game.

At home, and around the world, Sword Art Online has become incredibly popular, as soon as the first series were released. What's the secret? Maybe in an expensive sketch, maybe in a relevant topic. But for me this is not the point. Honestly, I myself have not completely decided what. It’s just that with every series I watched, the smile spread wider and wider across my face. For several days I was afraid to go out and talk with people about SAO. After all, then the smile will inevitably return, but what will the people think? Seriously now, you are walking along the alley, and you are again covered with memories: instant nirvana and estrangement from this world. The only thing you think about at such moments: as if you weren’t taken to Durkee or narcology. Very strange feelings, but pleasant.

Sentiment is an integral part of most anime, and unfortunately (or to my joy), me too. In Sword Art Online, they appear constantly, and not in the last positions. Most likely, they are the ones who touch the vast majority of the audience.

Romance is another fundamental component of Sword Masters. Sometimes battles fade into the background, and for several episodes we are shown the ordinary life of heroes in an unusual environment. In fact, lyrical digressions represent a strong, one can say a guiding thread, which fellow scriptwriters and directors tug on to draw the viewer to the screen. It is thanks to these warm, close and understandable feelings for every person that the authors make us believe that the line between fictional and real is so awkward and fragile. Can love leave heroes when they exit the game? The ties that bind them seem eternal and unbreakable, and all previous life - a nightmare. But even in darkness you can find a ray of light, right?

Anime’s problems begin where you don’t expect them at all. Conditionally, the series can be divided into two parts, more precisely, arches, as they are called in the original source. Each arch is a new world, a new "game". The purely positive emotions and impressions that I described throughout the previous paragraphs can be reliably attributed only to the first of the arches (the initial 15 episodes). This is not to say that the second half is very disappointing, but the fact is that you are viewing it more by inertia than by your own free will. Too much fan service, templates, and the obvious simplicity of what is happening. A knife in the back for such a wonderful and light Sword Art Online.

but i enjoyed it.