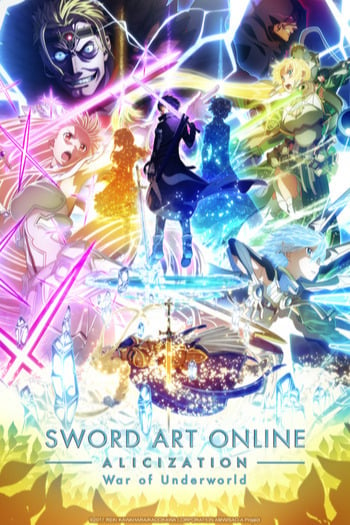 If you're looking for manga similar to Sword Art Online: Alicization - War of Underworld: Part II, you might like these titles.

Ryu Shinjo is a student who is invited (forced) by his best friend to enter the world of virtual and online role-playing games. During the game and when choosing his class, Ryu decides to become a "priest", through which he can regain his health through magic and thus play alone. However, his playing style is far from what you would call a "normal priest". It is time to learn the story from Ryu, the priest who instills terror into anyone who dares to stand in his way.

An SAO side story written by Kawahara Reki that was distributed as a present to visitors of Sword Art Online The Movie -Ordinal Scale- in Japan in the third week of the official cinema release between March 4 and March 10, 2017. The SS features a background story for Yuna and Eiji, two of the original characters in the movie.

Average high-school student Midori Shinomura falls mysteriously ill. While she wastes away in a hospital, she learns of another Midori - a fighter of terrible skill in the online game known as The World. There is a strange and close connection between both Midori Shinomura and game-Midori. With the sanity of both girls on the line, game-Midori will try to solve the mysteries of her past, and perhaps save the real-world Midori in the process.

Lara Hoerwick is visiting her uncle Harald, and starts playing a game on his computer while he is away. At first she is excited to find herself in the world of the Epitaph of Twilight, until she realizes that she's stuck in the game. To make matters worse, the game's world is about to be destroyed by the Cursed Wave. Lara's only hope is to set out in search of the Twilight Dragon.