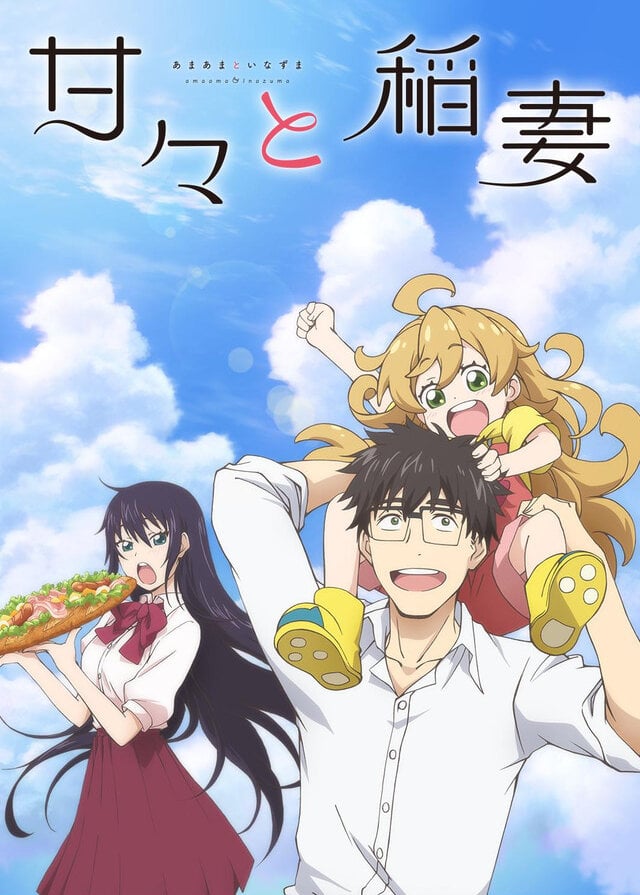 This anime is ok, but basically nothing at all happens and there is no plot. So it's just 12 episodes of cute kid and clumsy dad who regularly get together with a shy highschool student to learn how to cook different dishes - every episode ends with them eating the dish they cooked and looking ecstatic because of how they managed to make it so tasty and delicious. That's all there is to it.

Tsumugi-chan, the kid, is really cute but that isn't obviously enough. Tsumugi's dad and Kotori-chan, the student whose mother owns the restaurant where they meet up to try out their cooking skills are likeable enough characters - be that as it may, there is no development.

You might enjoy it if you're in the mood to switch off your mind and watch something extremely light, carefree and undemanding revolving around the antics of a little girl and her overflowing-with-good-will father.

As a father, this anime breaks my heart. Everything about it is a feels train for me, but I digress Amaaza to Inazuma is a resplendid Slice of Life, Shojou anime.

A father looses his wife and is left as a widower. He must care for his toddler daughter. He has no real love of food and meals the way his wife did, and he gets by. However, one day his daughter wakes him up to the fact that he's not doing enough... what happens? Well, just then they run across a young girl who can solve the problem!

Besides the Deus ex Machina, the setup works. Two persons suffering from loss - the father from his wife, and the young girl from her mother's constant absence - are coupled by the need of an infinitely kawaii toddler.

Honestly, it's nothing to write home about. It fits our modern animation schemes. Everything is pretty fluid, and I've not seen a scene borrow from another (i.e. no obvious repeat animations so far).

How ancillary characters react (animation wise) to Kouhei really drives home how careful everyone is being to his situation.

I like the OP/EP, and the background music is well done. All of the voice actors perform admirably; Kouhei's VA particularly conveys a depth which really enhances the character.

Very good back story and development so far on all of the characters. Reactions are spot on. Tsumugi is way too cute. Kouhei has the right amount of melancholy. The cast remains small and keeps the story intimate.

The character progression is spot on. We see growth and evolution on all fronts. Expect a feels train as you voyeur their journey in situ.

I personally love this anime. The story gives me the feels. The character interaction is personable and realistic. There's very little to detract from the overarching theme of this anime.

*My first and by far most important positive point is that this anime gave me diabetes. This anime was so freaking cute! I had that Usage Drop feeling al over again. Tsumugi was so adorable and the way how she acted and reacted was so real for a girl her age. If I would talk about all the cute moments in this anime than I think this review would be half an hour long. To only name one: when she walking on the white lines and has to be careful of the sharks and sings the shark song I just melted completely. And then were even little details that were so cute like the sound her shoes made when she walked. Seeing things like that make me look forward to te day that I have children myself. Now I must say that I found Tsumugi to be a little spoiled, she would get things her ways and she knew how to influence Kouhei in doing so. But either way Tsumugi was, together with Rin, the epiphany of cuteness.

*Now Tsumugi might have been happy and cheerful most of the time and also the anime itself is happy and cheerful most of the time. But there were times that SaL gave us a hit below the belt. This anime knew exactly what buttons it needed to press to invoke that sad feeling with its viewers. From time to time SaL would remind us of the sad fact that Tsumugi’s mother had passed away. Tsumugi and Kouhei were still trying to move on with their lives after her death and that gave the anime a sad undertone at times. And seeing how the two are slowly climbing out of this dark time gave SaL an extra layer on top of the cuteness.

*And a final positive point was that the color palette used in this anime fitted it perfectly. Fun, bright colors that elevated and emphasized the cuteness of SaL. Just like in other cute and sweet anime like Usagi Drop and One Week Friends soft but fun colors makes such an anime that much more fun to watch. Combine that with the fun opening and ending songs and the picture was complete.

*Now for the negative section of this review I only have two things to mention. First off is something that I said in my preview of the Summer season. Next to a cute anime, SaL was also an anime about cooking and it had to compete against Food Wars this season. And it’s difficult to even Food Wars when it comes to food dedication and focus. The dishes were way simpler and also less explained in detail.

*And the second negative point was that I would have liked more development for Kotori. First off it’s clear that the hole that she has in her life is the absence of her mother. Now her mother does appear all the way at the end of the anime but I still felt that there was a shortage of development there. And there was also a shortage of development with Kotori’s knife phobia. I really thought that she was going to get over that over the course of this anime but she didn’t. So it felt like the anime did very well with development on the hole in Kouhei and Tsumugi’s life but fell short on filling up those in Kotori’s life.

So as a conclusion, SaL was so sweet that it honestly felt like I was watching Usagi Drop again and I love that anime to death. I’m good again for a while when it comes to raising my blood sugar levels. I thoroughly enjoyed every second of this anime and that’s why I’m going to rate Amaama to Inazuma at 4,5 stars. This was one of my favorite anime’s of the Summer 2016 season. It’s a definite much watch for all those lovers of super sweet anime out there.

I was pleasantly surprised by this anime. I was capitavited by the innocence and the light hearted feel of this anime. This was a perfect anime to relax to after binge watching some dark and depressing shows. I will say this anime may not be for everyone, espcially those who seek deep and thought provoking plots with deep character developments. None of those things exist in this anime, its just a simple story about a single parent learning to cook in order to make his young daughter happy. The food he makes looks delicious! I looked up some of the reciepes they talked about and plan to try to make them to see if they are as delicious as the girl makes it out to be in this anime. For any one looking to watch a light hearted cute cooking anime then this is it for you!

Watching this from a fathers perspective really makes me connect to this anime, While its 9 episodes in I can see this review being edited and the score raised.

Story: 8/10 While it seems in the beginning that its the standard widowed father template, this show really expands on it, and it breaks free from the stereotypical path. Not only does the father grow in terms of being a father, the daughter seems to raise the bar daily. The fathers unlikely allies in his endevors really add the right amount of flavor to the story.

Animation: 6/10 It just above average going with todays standards, however it does not detract from the story nor does it become a hinderence to the story.

Sound: 8/10 The OP really makes me tap my feet. That is saying a lot based on I am not a music person. The ED really fits well.

Charaters: 8/10 The best way to describe them is varied. They blend well, there is no over doing it with any of them.

This is a real feels show, There are high points, and low points. But overall definitly worth every minute watching it.