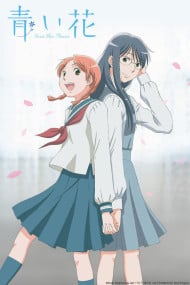 Youth is a Lovely Thing

When the Leaves were New

There's no mistaking that Aoi Hana is exceptionally drop dead gorgeous. With watercolored backgrounds that appear to have been taken straight out of Iblard Jikan and a flawless mix of CG and regular animation, Aoi Hana would seem to be a must-see.Except that it's so, so incredibly boring that I almost cried alongside the characters in Aoi Hana, who also incessantly cry.To be clear, I like slow anime; Kino no Tabi, Haibane Renmei and Piano are three slice of life titles that I love to death. But Aoi Hana is easily in my top 5 (or maybe even 3) most boring titles of all time. It's soul crushingly slow and uninteresting to the point that I had to watch the last episode in pieces to remain coherent.Preliminary reviews of Aoi Hana seem polarized - at least on the surface - between those who are avid readers/watchers of shoujo-ai, and those who aren't. Those who are have heralded Aoi Hana to be rich in character development, especially compared to other titles in the genre. I fully admit that it could be I'm not a conniseur of shoujo-ai; I don't mind it, as I watch romance/drama anime for the romance/drama, and not the sex of the couples. Regardless, I have no desire to compare Aoi Hana to other shoujo-ai titles - compared to other titles period, it's flat out uninteresting and slow to a fault.Character-wise, it's difficult for me to understand the argument that Aoi Hana is filled with fantastic beings. From the get-go I was put off by Fumi's obnoxious, inappropriate crying, and the rest of the characters don't have nearly the amount of depth I'd expect from such a well-lauded show.Romance-wise, by the end of episode three at least one relationship has begun to flourish - but frankly I didn't care at all. There's nothing three dimensional or deep here - same-sex aside, I found much more value and impact from a series like Paradise Kiss.Maybe I'm just missing something, but I could barely get through three episodes of Aoi Hana, and I definitely won't be watching the rest. It's beautiful, but ultimately was a huge waste of my time.

Aoi Hana (Sweet Blue Flowers) Plot: "Shy, crybaby Fumi has just transferred into Matsuoka Girl’s High School, in the city of Kamakura. It’s been ten years since she moved away, leaving her dear friend Akira behind; and soon, the two are reunited once more. Akira is now attending Fujigaya Girls’ Academy, though she and Fumi still manage to see each other regardless. Between classes and social engagements, the two will experience love, the struggle to admit one’s true feelings, and the joy of companionship." (site synopsis) Story: Yet another shoujo-ai work that came out last year. Aside from the other shoujo-ai that i reviewed recently, Sasameki Koto i liked this one slightly more since it accomplished in 11 episodes what Sasameki Koto couldn't do in 13 episodes. The story revolves around two high school girls, the energetic and cheerful Akira Okudaira and the shy, crybaby Fumi Manjoume. Back when they were in elementary school they used to be very good friends, they were hanging out toghether helping eachother until one day when Fumi had to move with her parents to a different place. The anime depicts the moment when she reestablishes in her childhood town once again and enroling in Matsuoka Girl’s High School. Fate has it that Akira and Fumi meet but since many years they haven't met nor talked they forgot eachother. Akira remained as cheerful and as energetic as always while Fumi remained the same old crybaby like in her childhood. However Fumi grew taller than Akira and it was understandable why they couldn't recognize eachother. The same day Fumi's mother took her to visit an old accquaitance of her and there Fumi realizes that the girl who helped her in the train the same day happened to be her old friend Akira (or Acchan as she used to call her). Unlike Sasameki Koto where there were only two main lesbian pairs here we deal with something a bit more complicated, love triangles, more angst and alot of unclear situations. Fumi and Akira quickly got along and reestablished their friendship, but will this remain the same? Here is where the complicated things start to happen. As soon as Fumi settles in Matsuoka Girl's High School she gets to meet a special upperclassmen Yasuko Sugimoto. It is not long until Yasuko tells Fumi that she actualy has feelings for her and she wishes to date her. At first Fumi accepted it, but since society doesn't view these things with good eyes they had to keep it a secret. However Yasuko is Matsuoka's school idol and things were not that simple. Another girl that had a crush one her Kyoko Ikumi, which happened to be Akira's classmate kept trying to become her lover but Yasuko's feelings for her were non-existant. She got rejected. There wasn't long until Fumi realized that Yasuko doesn't really love her, that she is actualy the object which should distract her from her true love. Unfortunately there won't be too much development between Akira and Fumi. I expected Fumi to have feelings for Akira since they've been friends from way back but its not until the end when she realizes that Akira was actualy her first love. Pretty complicated story which kinda resembles real life in its own way. Unlike Sasameki Koto, even though there was room for more development in this one, the ending seemed like a good point where you can finish a series without yearning for more. Unfortunately the author of the manga stated that because of low disk sales, this won't get a second season so the only option is to go on with the manga. Animation and Sound: Splendid animation quality, design and directing. The background design were made in a proffesional way and the character designs as well, way better animation than what I've seen in Sasameki Koto. The sound was kinda forgetable and judging from my tastes, really slow ones but typical for slow-paced shows, but definitely not something that is on my tastes. Background sounds were good which fit the atmosphere of the anime. Characters: What I liked about this show is that all and i mean all the characters were completely developed to their full potential, nothing was left in the dark absolutely no holes in portraying them. We face a theme that is rare in this kinda of shows "appearence different than personality" and yeah I'm pointing at Fumi especially. Her height kinda betrays the fact that deep down inside she is actualy very delicate, shy and a crybaby. I liked how the secondary characters such as Kyoko and Yasuko were developed almost the same effort was put in these characters like in the main ones. Overall: Short but good, at times boring but in the end worth watching. Those that do not enjoy slow-paced/slice of life shows should really stay away from this one, but those that do enjoy them will find something pretty surprizing. The ending, at least for me, didn't make me yearn for more, its as if "hey, she realized in the end, so thats enough for me, i don't wana get into another love story, into another melodrama". Though i still wonder whether Fumi's love was one-sided or Akira had feelings for her as well but without knowing. Well first thing I will do is to keep with the manga since the possibility of having another season is unfortunately out of the question at this time. Probably later when things settle down a second season might not be something impossible. ~Enjoy and Cya Around~ 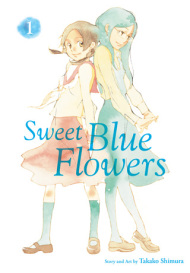