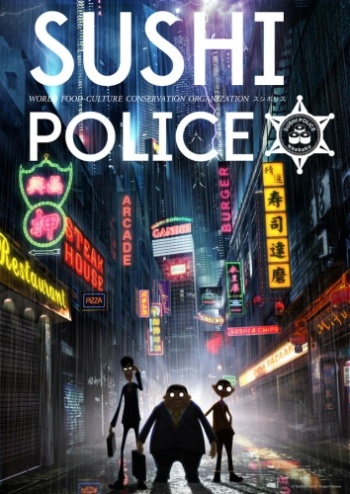 This was... weirdly ok. Not great, but given it's called Sushi Police I was expecting a lot worse.

So the story, as you would expect, is absolutely ridiculous. The Sushi Police literally go around stopping people from making weird sushi. Only people actually start to object! And then it starts developing into a fairly deep story! It's weird... Don't get me wrong, I'm glad they went that way, but it was still very weird. Not at all what I was expecting.

And the characters as well - they get development! They're still pretty bland characters, and honestly I don't really remember anything about them, but just for the character development they get a pretty good rating in my books.

The CG animation was surprisingly good as well. I'm not sure I could have dealt with it for much longer than the episodes are, but given they're only 3 minutes and the CG is actually pretty good, even if you completely object to CG animation, I think you'll find this ok.

This was unexpected in many ways. It really did not go the way normal episodic series with stupid concepts go, the CG was decent, and I actually enjoyed something called Sushi Police.

If you're after something a bit different, like stupid anime concepts, want to learn a bit more about sushi (they have facts at the end of each episode, it's pretty cute) or just want to try some well done CG anime, then this is a good series for you.

“I don’t understand you.”

but I’m going to review you anyways.

So this anime is all about protecting authentic sushi. Those tasked with the job encompass an advocate for the purity of fresh sushi, a robot, and a doctor/mechanic/scientist.

Together these three respond to threats from around the globe: anywhere and everywhere sushi is being disrespected.

Mr .Advocate (Honda) can hear the cries of sushi in pain - those being paired with uncomplimentary sauces, those that have expired, those being frozen, subjected to a growth ray, etc. He directs the robot (Kawasaki) and the Dr. who don’t always do what he instructs. But hey sometimes listening to the boss is a bad idea.

The supporting cast includes a busty blonde with a predictable backstory, a semi-talking cat, doppelgängers protecting pasta, a director who may or may not be what he seems, and a Chinese man dedicated to revealing sushi’s origin.

Physical gags are a staple in just about every scene. Whenever and wherever a sushi is being defiled the trio turns up for some harsh beat downs. More than one time someone is decapitated.

Wasabi bullets and gas are their goto weapons when and if their physical presence fails - which happens more than once in the 13 episodes.  Those affected by the projectiles and gas are quick to react to the strong stench.

The physical appearance of the characters - major through villain of the week(ep) - are also a running theme but little to no comments are made about them - they exist for the viewer to get a laugh out of.

The ending is a ripoff of a beloved movie.

Really there’s not a whole lot to this anime but if you’re into comedy featuring food then watching this might make you smile.

One thing that does stand out is that America - or more precisely Americans - are not the only ones targeted for culinary insults to another country's iconic food.

First off, this was a hilarious little series that I managed to watch all in a day. Albeit, it was hard to find it online and get it to stream properly. Goofy, raucous, and almost satirical in the right light; this series is short, sweet, and to the point. Pardon my cliche. If you've got a couple hours to yourself someday, it is totally worth a watch.

Not a lot to say about it, it is fairly straight forward in it's delivery. It was simple for the most part but the twists at the end left me feeling like I was watching an M. Night Shamlamadingdong movie. For that, I can only fault it slightly. It goes: Stop bad sushi, what if we are the bad guys, random robot back story, and evil sushi man with confusing motives.

I wwill keep this brief. I hate CG animated films and shows, they are often done poorly. This is totally biased and should not affect your desire to watch, the animation is for the most part clean and lends to the funny atmosphere of the show. The portly boss and the spindly nerd fit their roles well, as I attempt not to spoil any of their backgrounds. Just not my cup of tea, you see?

Not a huge expert, but it all sounded clean to me. Clarity was provided and the sound track was as goofy and fun as the characters. Now I will say that the voices are not always the most pleasent to listen to. I am not entirely certain on whether this is the fault of the actors or the sound engineers. Therefore, I must not fault it for lack of a clear conclusion within my own mind.

Great for the roles they intended to fill. Motivations were not always clear, especially for the villain, so for that I fault it. Back stories were very minor considering the scope of the series and it's intent, but they are randomly tossed in and don't add to the overall piece. Otherwise it is a short series, I am not going to dedicate much more analysis to the characters than this.

Should you watch: yes

Sushi Police is one of the most unique animes of this season. It is very funny and cartoonish so if that is off putting then you work like it.

STORY: Due to the 2020 Olympics everyone is making sushi overseas. Japan sets up the sushi police to make sure that the overseas sushi is authentic. It’s mostly an over the top comedy which the characters going around the world and in 3 minutes punishing the offenders with wasabi.

ANIMATION: Different. I loved the intro as it very American cartoonish and the characters are very cartoonish too. It manages to pull it off successfully and was one of the freshest animations I have seen in a while.

OVERALL: I give it a 8 (top 25%). This anime was funny was very unique. I loved the American influence and cartoonish style. The animation can be off putting to some, but if you don’t mind you’ll enjoy this anime.