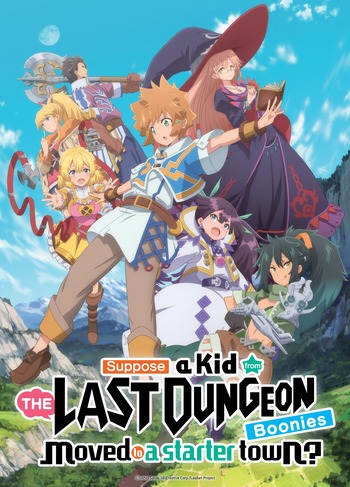 If you're looking for manga similar to Suppose a Kid from the Last Dungeon Boonies Moved to a Starter Town, you might like these titles.

In this world, the concept of levels exist. Other than those who live off defeating monsters, most people are only around Level 1 to 5. What's more, not just anyone can go out to hunt monsters; it's heavily influenced by one's role appointed by God. There are eight such eligible roles. Those blessed with extraordinary power are divided into three types. But for the majority of the population, they have no such powers and live by farming or running shops. Towns are developed by those with the weakest role... Villagers. For the powerless Villagers going out to hunt monsters is equivalent to committing suicide. But one day, a certain two-year-old child given the role of Villager notices something. Once you defeat a monster... you can earn great wealth.

To live from bottom-class to top-class farmer, our protagonist Aru Wayn levelled up his agricultural skills, and sometimes his other skills leveled up as well by helping out his friends. One day, when his last skill level hit MAX, his life changes."I want to live as a normal farmer!!"

One day, 22-year-old Kanzaki Misuzu is suddenly transported to a strange world. Based on the pop-up screens she can access, it seems she's entered some kind of RPG as a magic user! Luckily, she can use the gaming skills she acquired as an otaku to make her way in this new world. But before she knows it, people start calling her "the Black Healer"!!

Axel Granz, the strongest dragon knight of them all has switched his job to become a beginner carrier. Relieved that he can finally take off his legendary dragon knight’s helmet and escape the responsibilities of an elite S-class worker, Axel eagerly starts his new, low-class job!

Douglas Ford is a mage who has spent the past two decades using his magic to help others, ever since he became an adventurer at the age of fifteen. Now thirty-seven years old, he's contracted a mysterious ailment that causes his HP to drop whenever he uses his powers and his body is starting to wear out. When his guild unceremoniously kicks him out after his adventurer's license is revoked, Douglas wanders the land alone and encounters a little girl who has been transformed into a giant wolf. He decides to use up the rest of his dwindling life force to change the child back, but when casting the spell doesn't actually succeed in killing him, Douglas finds himself with a brand-new purpose in life - raising his new daughter!

On his way home from his office, the main protagonist drove and ran over a big dog. At that moment, he heard the sudden sound of a voice inside his head. "The monster has been subjugated, gaining experience points." Before anyone knew, the world has changed. Monsters appear, this is a game-like world where levels, skills, and status exist. This is an adventure where the modern world becomes fantasy and where the main protagonist has to strive hard for his survival.

Sagara Soma is a hardcore gamer, who spends basically all of his time playing or thinking about games. Since he was a child, he's thought of how great it would be to really live in a game world. One day, when he breaks a promise to his cousin Maki in order to play video games, his wish comes true. "New Communicate Online," also known as "Neko-Mimi-Neko," is the game he was playing at the time. Neko-Mimi-Neko is well known for its trick quests, occasional unfairly high level enemies, and many bugs, all of which combine to make players die over and over again. Now that Soma seems to literally be a starting character in the game world, will he re-spawn after death, or actually die? Luckily, he knows just about everything there is to know about the world of Neko-Mimi-Neko, so he may be able to make the unfairness in the game work to his advantage!