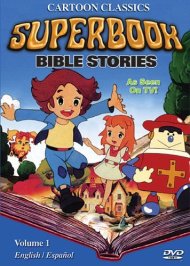 Chris and Joy were two normal children living normal lives - until one day they discovered a magical bible called the Superbook. When everyday events touch upon a holy story, the Superbook glows, opens, and transports the children and their toy robot back into time to experience an event for themselves. Whether it's witnessing the creation of Noah's Ark, discovering the origin of Mother's Day, or coming face to face with David and Goliath, there are plenty of stories the children will experience together.

Based on stories from the Bible

My God! I can’t believe they allow such bad Bible-themed stories to exist! They are an insult to both religion and the anime industry.Anime Oyako Gekijou is a very old children’s adventure that aims to educate kids on the basic events of the Bible (or the Old Testament, if you prefer). It is not a bad thing to have educational anime out there, especially about a neglected theme such as the Judeo-Christian teachings. But it is a VERY bad thing to have anime that misleads and misinforms children by simplifying religious texts to the point of becoming lame fairy tales. ANIMATION & SOUND SECTION: 2 Only by becoming black and white could the graphics be any simpler. At least there is some detail at the representation of the way of the Hebrew life. But after watching dozens of well-made movies and documentaries about the Jewish history, I can’t even bare to look upon this series again. STORY & CHARACTER SECTION: 2 Get emotionally ready… Some kids from modern Japan find a magic book that transports them back in time to witness major events of the Bible. ZONK! It would be ok if the events weren’t watered-down to resemble fairy tales. The scriptwriters took out all the violence, the sex and the depravity, which the Bible is so well filled with. It’s like eating mushroom soup without any mushrooms. Plus, all characters behave like too-goody 5 year-olds with no air of realism around them. How can you possibly NOT hate them? VALUE & ENJOYMENT SECTION: 1 As if the Bible isn’t distorting history enough by itself, we have this annoying crap to make things even worse. VERDICT: 1.5 / 10 The accused is found … GUILTY! … For distorting truth and religion. He is sentenced to public execution … IMMEDIATELY! SUGGESTION LIST EVERYTHING ELSE! This is amongst the worst anime ever.

So, let me touch on a few things before you read my review. I am pagan, but I grew up Lutheran Christian, reading the bible and watching shows like this (Heck, this is one of the shows I used to watch as a child). I still live with my family that is very Christian. I believe in some things about the bible and the good message that is supposed to be in it. That said, I will not be getting to into the differences between the bible and this show. This show was made for children, and no matter what anyone says, the bible is not a child friendly book. There are a lot of racist and sexist things in the bible that are no good for children cartoons. Now pleasantries aside and I haven’t scared you off with my fair warning about what you will find in this review, I say lets get on with it. There is really not much to explain about this show, it’s just not that good. The whole concept of the show from what I gathered now that I’m older is to scare children into doing everything they are told to do. The very first episode pretty much starts out with Chris not wanting to clean the attic that his father told him to and then ends after Chris saw the first story, Adam and Eve, and then he says he will to everything that his father tells him to do. The problem with this is that the way the dialog is written, its very robotic and makes the characters not have that much personality to them. So besides all the characters from the bible, we have Chris’s Dad, who basically has the personality of an overbearing father, Chris, who basically has the personality of a fast talking little boy, and Joy, a sweet little girl who always ends up hanging around Chris. Then there is Gizmo…. Who pretty much acts like a little kid even younger then Chris or Joy. I think he is more of a annoyance then any sort of help to the children. These are pretty much everything about them. I know that the characters are supposed to have some personal growth going on but their personal growth just ends up being ‘Oh, I did this in the beginning of the episode. Now I went and saw a story in the bible talking about the same thing I was annoyed about so I won’t do what I did in the beginning anymore.’ Rinse and repeat over the span of each episode. The personality of the bible characters are very one sided. They are ither good or bad, and the conversations that they have just seem to come off like a creeper. Every time I hear them talk, the hair on the back of my neck stands on end and I get a chill down my back. How did I not get nightmares watching this? This artwork might be the reason why I am really into Japanese art now. The look is very Japanese anime from that time. The large eyes and the cute chibi style. When I was little, I had no clue that the super book was actual a Japanese anime itself, I always thought it was from America so it was surprising when I was looking up the info about it. I don’t quite know if this was just from the quality of the show, or the quality of where I was watching it, but the show was very blurry. The backgrounds felt more like blobs of color and the characters seemed to meld into it making it hard to watch. The opening song is… a product of the times I think. It has a bit of a jazzy sort of feel to it but doesn’t really have anything to do with the actual show. It really dates this whole series and makes me sigh. The ending song is also very dated too. Both songs basically just try to push how ‘super’ this book is. This was a show I loved and now looking back at it, the voice acting and the music just feels like it was rushed or didn’t have that much care put into it. The first episode, even the narrator sounds like he was rushed when you first get the introduction as to what is happening. The level of voice acting in this show is pretty on par with Speed Racer, except speed racer was enjoyable to a point. This is just sad. They do the lamest way possible to explain anything in the bible, and everything just has to be explained. I wonder again just how they caught my attention when I was young because right now, it’s just boring. This show used to be a show I watched when I was little. Now that I’m older, I can’t believe I used to watch this! It has no personality and no soul to it. This has two seasons but I could barely get through the first 5 episodes. It has nothing to do with me being pagan and everything to do with how mind numbing this show is. It hurts watching it with just how little soul was in it.

I honestly can never get enough of Superbook it pretty much paved the way for my early life and learning! Thank God!