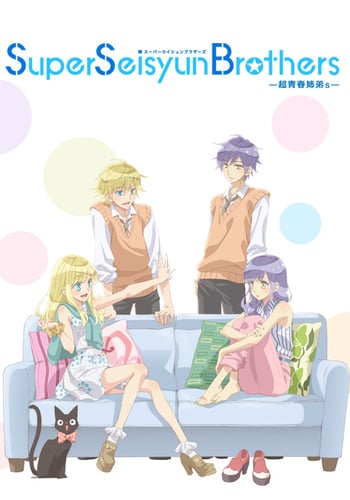 Super Seisyun Brothers revolve around two brothers with two older sisters who are each their best friends respectively. As others have said, one of the downfalls of this Anime is the plot, but with such a short series, this is to be expected. This series is 14 episodes only lasting 4min each. Thus this is an easy 1 hour and you're done type Anime.

As mentioned above there is next to no plot but the general story is as follows. Two blonde hair siblings who are extroverts are best friends with two purple haired siblings who are introverted. There is not much back story on how they got together but a little history is shared in the series.

The art for a series this short really surprised me. There are plenty of full 12 episode 24 min long series with far worse design and animation so I can easily give it a passing grade here.

SSB had a nice piano BGM throughout that was hardly noticeable unless you were actively trying to hear it. Not good; not bad.

Of course with this series, the two sibling groups are the general focus but after a few episodes, we get introduced to about four new secondaries who are decently memorable.

I had fun watching it. It is more of an OVA under the guise of an Anime but it doesn't promise any more than it delivers. With a good amount of comedy, nice character design and solid animation, Super Seisyun Brothers is definitely worth an hour of your time.

Would have made a nice story if there was a plot, but is dissappinting as a 4 min episode. Only episode I laughed at was 7.