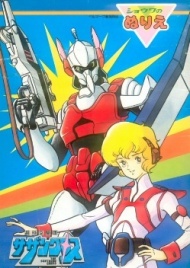 Jeanne is a lieutenant in the Southern Cross army of the planet Glorie, but she cares more about having fun, fashion magazines and a good night out than discipline – not to mention her fascination with a good hot shower! But when a mysterious alien force called the Zor arrive, Jeanne's recklessness and blatant disregard of orders prove very successful on the battlefield; and in no time she finds herself as commander of the 15th Squad. The fighting soon turns grimmer as humanity is heavily outnumbered and cut off from the home world, and its technology is dwarfed by the Zor. Jeanne and her squad now must defend their new home in any way they can and find out whom these mysterious aliens are, and what secrets they may be hiding...

Most Westerners know Southern Cross only as the second part of the Roboteck series. In reality, it is a stand-alone series with a similar scenario as Macross. As a publicity stunt, it was united through name and sound alteration with the ending of the Macross storyline and the beginning of the Genesis Climber Mospeada storyline (Another stand-alone series. Damn American mix-remakes!) This review involves only the original stand-alone series and not its hypothetical ties with the other two series. ART SECTION: 5/10 [same old, same old…] Analysis: General Artwork 1/2, Character Figures 1/2, Backgrounds 1/2, Animation 1/2, Visual Effects 1/2 Decent during its prime but never amazing. Everything eventually feels simple and unimaginary, outside some mecha designs. I hardly remember how the characters or the spaceships look all because of their typicality. Really, watch one b’ grade 80’s sci-fi series and you have watched them all. The same old mechanical feeling of plugs and cubes and flying ships. Furthermore, in most cases, the mechas crudely roll or jump, instead of walking (which is quite hard to depict realistically). In others, they stand still in the middle of the battle and become sitting ducks for obviously seen incoming enemy fire (as if it would be quite bothersome for the animators to depict them trying to avoid them). SOUND SECTION: 5/10 [I don’t remember a single music theme. That tells a lot.] Analysis: Voice Acting 1/3, Music Themes 2/4, Sound Effects 2/3 Voice acting and sound effects were mediocre. The main heroine’s voice was more annoying than cute. STORY SECTION: 4/10 [Not again!] Analysis: Premise 1/2, Pacing 1/2, Complexity 1/2, Plausibility 1/2, Conclusion 0/2 In the far future, humanoid aliens claim a colonized human planet, which was in fact their homeplanet long before the human arrival. They seek energy to sustain their dying race but the humans who had many hardships while terraforming the planet, refuse to leave it. War breaks out and it’s up to a bunch of teenage soldiers to save the day.The scenario is typical and has no real surprises if you are a veteran viewer. Most episodes have an ongoing story but it generally feels too simple and up to a point repetitive. There are a few simple side stories amongst secondary characters to spice things a bit while the concept of the aliens living in triplets was an interesting concept but was never really looked into much. It was also funny to see how typical technologies of today, such as cell phones, virtual reality, and man-machine interface are presented as brand new in the series in an era that is supposed to be centuries ahead of us. Anime are famous for looking into the future but in this particular case felt completely off. Last impressions are bad since the ending is bizarre and open. No clear explanations or answers are given which leaves you rather disappointed. CHARACTER SECTION: 6/10 [Nice try but not good enough.] Analysis: Presence 1/2, Personality 1/2, Backdrop 1/2, Development 2/2, Catharsis 1/2 (spoiler alert!) The aliens are typical megalomaniacs who plan to rule the galaxy. Yet, they need to return home in order to survive, so in many cases they show human-like emotions (something that it is normally forbidden). Humans on the other hand, typically want to protect their country and family. Yet, they feel too proud to back up from a loosing battle and in many cases, the military sends hundreds of soldiers to be pointlessly slaughtered or even orders the massacre of defenseless aliens.- Only two characters really have a personality. The leading female for the human side is a teenage blonde soldier, who usually acts childishly but gets really cunning and determined when it comes to battle. She practically never follows orders and does anything she likes in order to help others.- The leading male for the alien side is an amnesiac man, who in reality is the reincarnation of the aliens’ forefather. He tries to act like a human but is actually used as a spy. He too stops following orders and eventually tries to stop the war.- The rest of the crew are really shallow and don’t deserve any reviewing. There is always some romance and sexual attractiveness going on in the air just to arouse your interest for them, but it’s outdated if you’ve seen a few good ecchi series. The series generally aims to make you feel the drama of the story as a whole and doesn’t really focus on characters. That overshadows most of the appeal they can have. VALUE SECTION: 1/10 [Cheap!] Analysis: Historical Value 1/3, Rewatchability 0/3, Memorability 0/4 Only remembered as a supposed sequel to Macross. Other than that, it shares the same themes albeit in a lot less interesting way. ENJOYMENT SECTION: 3/10 [I’m simply too hardcore to consider shallow space dramas to be “good”.] - I don’t really suggest this series. It becomes easily unappealing when the leading female, who never follows orders gets promoted all the time for breaking them, and when the leading male is easily welcomed in the human society where normally he would be interrogated and dissected as an alien enemy. - Still, although childish most of the time, there are a few points in the story where you don’t exactly have a clear picture of who the good guys or the bad guys are and that makes the story for both warring sides seem more dramatic than in other similar series. VERDICT: 4/10