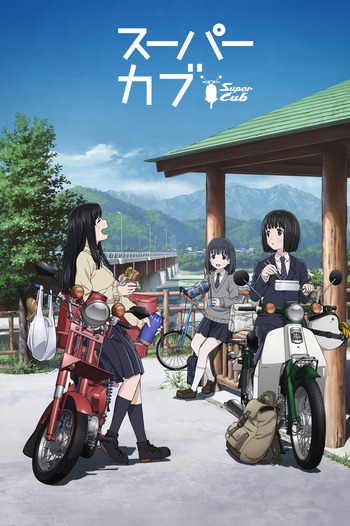 Haruno Shizoaki is a young high school student living in a Japanese rustic small municipality. After sixteen years stuck there, she wants to leave her hometown, but is uneasy about the future. She then meets Cynthia B. Rogers, an Australian who has ridden her bike through many countries around the world and will now work at Niwa, a café owned by Haruno´s family. Cynthia´s presence makes Haruno think about many things and inspires her friends to consider a more adventurous lifestyle.

Sakura Hane is worn-out climbing a hilly road with a bicycle, but she meets a girl riding a motorcycle and then joins a motorcycle club.

A child going by the name of Kino has lived through a traumatic past experience and now lives with an old woman called Shishou. With the help of Shishou, Kino hones the skills needed to survive, learning to handle a gun and ride the talking motorrad, Hermes. However, young Kino is haunted by what happened to the original Kino, and is also suffering from an identity crisis. Even with these issues, the fledgling traveler must prepare for a journey; but will Kino's very first journey prove to be pleasant or harrowing?

Kino and the talking motorrad, Hermes, travel the land together; visiting different countries and learning about the various customs and cultures of the people they encounter. From technological marvels to nations with unique laws and political intrigue, each location yields a wealth of insight of its people. The beautiful world they inhabit is a vast one, and a number of other travelers share tales of their adventures as well - an exiled prince wandering the land with his talking dog; an orphaned child raised by artificial intelligence; and a former slave girl with a talking motorrad of her own, photographing the world around her as she travels through it. Although the world is not always beautiful, its rich diversity lends it a fascinating loveliness that is worth the journey to see.

A series of short stories that follow the cast of Kure-nai shows the characters' everyday happenings and reveal more of their eccentric behaviors and personalities.

Riko, Midori, and Mai work in an inn in Kyoto and are training to become maikos. A festival is coming and the three must practice their skills for the event.