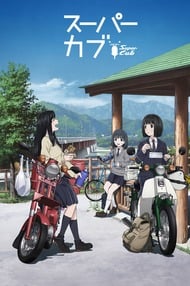 Koguma is a high school girl in Yamanashi. She has no parents, friends, or hobbies, and her daily life is empty. One day, Koguma gets a used Honda Super Cub motorcycle. This is her first time going to school on a motorcycle. Running out of gas and hitting detours become a small source of adventure in Koguma's life. She is satisfied with this strange transformation, but her classmate Reiko ends up talking to her about how she also goes to school by motorcycle. One Super Cub begins to open up a lonely girl's world, introducing her to a new everyday life and friendship.

There are no villains. There are no antogonists. Just a sedate narrative about an introverted girl who bought a Honda Super Cub (mo ped) and drives it. Thats about it. She makes a friend that she would not have had unless she had purchased the bike. They ride thier bikes through different weather conditions and seasons. The most dramatic highlight of the season is a rescue of her friend from an icy stream. Its the best boring anime series ever. The background art is photo realistic at times and is impressive. I really enjoyed it. It seeems like a comercial for Honda Super Cubs however. Maybe thats the point. Who financed the production of ths series? The moral of the story? IDK, maybe buy a mo ped? Or maybe its try new things and change up your life.

It's time for another show this season with a biker gang expect its after one girls! Are your ready to see them whoop ass of other gangs? Oh wait it's just a SOL uhh okay, well I guess that isn't a surprise. Well then super cub is one of those relaxing sols where you can just sit back and have ut play in the back ground. I'll be brief since it's not the most outstanding shows. For the most part the is alright a bit on the boring side but still it's better than some. Two bad notes first, the cgi sometimes they use it other times they don't, pick one, the other issue were the 3 random overly dramatic parts seriously you can just skip them. On a positive note the animation solid and fun to watch and whenever they decide to saturate the show it really looks amazing, the sound is solid too and the side characters are alright,  for the most part if you don't have anything to watch or need a detox from high energy shows than super cub is just the show for you

Story synopsis: introvert buys moped, make friends. The end. Yet you will love this. “Super Cub” is the anime equivalent of a palate cleanser. It’s a whale song CD. Don’t expect any drama. No tears. No hospital visits. No blushes in the presence of a first love. Little in the way of drama. In fact, nothing much happens at all. This is iyashikei at its finest. Somehow the whole is greater than the sum of its parts, and you will find it adorable. You won’t know why but you will be quickly addicted to its charm. It will touch your heart. Koguma is a shy high school girl with no family, no hobbies, no money, nothing – not even friends. Her life isn’t horrid, she isn’t bullied, yet it is dull. Routine. She cycles to school every day and hates it. She is envious of the other students on their mopeds. So, one day she decides to get one for herself. (It is never explained how she got the money.) She is lucky to find an iconic Honda Super Cub, with barely 500km on the clock, going for a song. (The seller claims it has taken three lives! So you would imagine the making of a drama/mystery…. You’d be wrong.) As the tale progresses Koguma learns everything there is to know about owning and running this Honda bike. It takes several episodes for her to make it rideable in the winter snows. There are no real “adventures”, more a set of simple discoveries. The story fleshes out as one long love letter to Honda. It is touching and subtle. Koguma is quickly befriended by her pushy and extroverted classmate Reiko. They are united by just one thing – their bikes. Refreshingly the lead female characters are driven in ways mostly novel to the genre. Here we have teenage girls who don’t talk about pop music, share cat videos or long for teen-romance. It isn’t necessarily all about the bikes either. The bikes are more of a metaphor for something else – freedom. The bikes themselves, plus all ancillary equipment, are all lovingly reproduced in 3D CGI. Accurate (we presume) down to the finest detail. The other gear, the helmets, the gloves, their jackets, all exist in the real world. The places the girls go to are all largely real too. It is almost a documentary. They live in a rural community with a view of Mount Fuji. Reiko dreams of riding her Honda to the top (a sub-story that dominates one episode). The duo is joined later by the diminutive classmate Shii who has dreams of her own – turning her parent’s diner into an Italian-style café. Without Reiko and Shii the story would be pretty threadbare. The narrative unfolds from Koguma’s point of view yet she is an empty vessel. She has no back story, no family, no dreams. We learn nothing about her throughout the twelve episodes. How such an engaging coming-of-age story manages to be quite so wonderful without establishing the basics of the main character’s background is quite the miracle. Equally mysterious is Reiko, who has just enough personality to carry the story yet, like Koguma, she lives alone without family. We never find out why. It just doesn’t matter. We learn little more about the characters. Reiko is the fun & bubbly one who is quick to take Koguma by the hand for a girly chat about bikes at school lunch-break. Reiko knows all about Honda mopeds and through her we learn too. Later on, it is Koguma who takes the role of “Mum” by firmly leading Reiko around the shops, by hand, when Reiko gets distracted. If Reiko is the tall-and-slightly-silly “Dad” character, Koguma is the serious and responsible “Mum” then it only leaves tiny Shii to play the emotional child in this unorthodox biker family. The refreshing angle here is the originality in the story telling. It manages to avoid most anime clichés, tropes and plot devices. The whole thing could have been filmed frame-for-frame in live action. This isn’t K-on! Don’t expect too many laugh-out-loud funny moments. There are no beach episodes, no bikinis, no fan service. It really isn’t THAT kind of show. (Exceptions: Reiko coming out of the shower, under-dressed, only to be shooed back in by a stern Koguma, is one of the few anime conventions observed here. In a similar vein observe Shii’s girlish embarrassment when Koguma puts Shii’s underwear out to dry.) It is very non-touchy-feely to the point of being cold. Koguma is almost robotic. She rarely, if ever, manages to raise a smile. Reiko and Shii make up for this by being warmer and more engaging - yet this is not a story over-flowing with emotion. Shii sheds tears briefly in a later episode – an emotional outburst in which she expresses her profound hatred of winter. This will trigger the glorious road-trip in episode 12 as the girls head south to see the first cherry blossoms of the Japanese spring. This is romantic in the poetic sense of the word. “Super Cub” is the heart-warming, feel-good, anime story of the decade. You’ll want to curl up inside it and sleep. Think of it as an anime duvet to snuggle down into. An antidote to the head-messing nature of such anime as “Higurashi When They Cry”. Revel in it. A diamond.