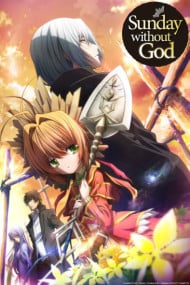 Warning this Review May Contain Spoilers- So this review is for Kamisama Inai no Nichiyoubi also known as Sunday Without God. Which is a fantasy anime based around a young girl called Ai and her journey trying to find the truth about the land with ‘God’ apparently abandoned or so they say. Ai is a grave keeper and has to technically put people who have died where they belong, the dead people are slightly like zombies, they can’t die until a grave keeper buries them so ok…slightly unique.  The story was emotionally developed quite well however rushed die to the shortness of the anime, because it is only 13 episodes. It is really detailed and it surprised me in a good way, I actually enjoyed it quite a bit. The opening and ending animation was spot-on, I don’t think that there was much to say other than that. The character designs were unique in their own ways and they all had interesting element to make them all different. The music was unique and it is surprising that Eri Kitamura sang the opening after hearing her voice characters like Yui, it was pretty cool. The voice actors were chosen perfectly and I couldn’t really say much about that either other than it was amazing. The ending like normal isn’t as catchy as the opening but that is just that.  The characters match their designs pretty well however like the story they weren’t developed much, come on people they had to get rid of one of the best characters in episode 3, what’s that all about.  3 episodes isn’t long enough for a good character development at all, this was slightly disappointing but even still I like how they kept Ai until the end and some of the other main characters. Other than the whole 3 episode thing the characters were pretty well laid out in a way, so they were quite good. In conclusion Kamisama Inai no Nichiyoubi is good for a 13 episode anime which we all known are always the best in emotional development. If you haven’t watched It you should check it out but be prepared it can get emotional.  ~AngelBeatsYui~

No Spoilers (only mild sass) Overall: Good (Possibly Great) idea, poor execution. This show had some fantastic potential and the main character's, shall we say uniqueness brought a lot to the table, but goodness nothing really happened. This type of show does mini stories, which you can see by the titles of the episodes. Although they're in a chronological order, they don't necessarily have information between the storylines. Not necessarily a problem mind you, just a point to consider as the writers have given themselves the potential to jump around to any point in our lead's journey. ...Hint they don't take advantage of this. There are some plot twists, but I wasn't enthralled enough to care. To be completely honest instead I ended up rolling with the punches of it like "oh, neat... what's next..." Honestly the reason I'm so disappointed is because they have such a great set up and it's so poorly executed. I mean they talk about death vs. life and such throughout it but don't draw any conclusions, they talk about deadly things and what happened but don't go into any details or turmoil that ensued from it. AND most of all, with all these bad things that can happen, we assume can happen, they've dropped hints that they have before and may happen now, our little protagonist is fantastic at finding good, wonderful people and the shining light on all. TRA-LA-LA! So this could've gone way different just by adding contrasting character who are actually disagreeable. I'm not even mad they didn't make this a zombie apocalyptic thing, but they didn't even focus on the people affected all that well either (which I assume was their point, focusing on the humans left)... Instead of following a path to discovery, we follow a path to confusion. By which I mean dreams and ambitions of main characters become uncertainties. Mind you this could be beautiful (question life, come to conclusions, face the world, philosophies, etc.), but it isn't really presented that way. There may have been an intent to question our thoughts and get all meta up in here, but they don't... I mean our main character is 12 years old sooo you get the idea.  Please keep in mind the Hulu mature audience thing is a really just because we're talking about God and stuff. Nothing sexual, Ecchi, bloody, or heavily violent in the show so don't let the disclaimer step up some expectations.  Characters are the real focus of the story. We explore and watch the characters grow, yet there isn't much visual growth. Our protagonist, for example, is a curious and questioning person (of course never questions the audience would ask, but instead character development questions) from the get-go who provides comments that are unusually insightful towards the person they're speaking to so you can't really grow from that. Some characters I enjoyed more than others, and you'll probably find yourself in the same boat. Some backgrounds of characters are glossed over so we "don't care" as much about changes yet the writers cover their tracks on personality traits. This can get kind of annoying since you want information, but you get nothing really because they just want it to be fact. Finally on characters, all the characters who we take the time to get to know are good in some form. Like kid's movies are more forwards with HE.IS.BAD concepts, instead all characters have some (heavily) redeeming quality. Animation was cute, but nothing special. It actually has some similarities with early 2000s style even though it's 2013. MADHOUSE usually does produced clean works and some trademark detail work so it certainly is done well and appropriately. Sound was not my favorite. It didn't hurt the show, but I didn't make me glad for it either. Voice actors were normal as well. Common matches so nothing too special either. Soo I'm disappointed, but I liked the concept. So it got some solid points for concept, but man, oh man did they miss the mark on this one. And the first few episodes are such a bait and switch! 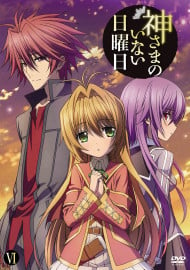 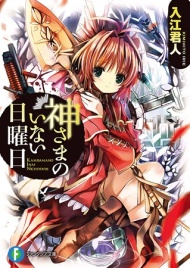