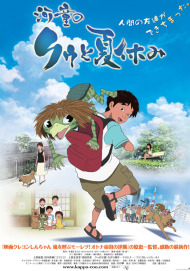 One day, Uehara Kouichi digs up a stone by the side of a river, and when it breaks in half he finds a fossil inside - or so he thinks. The fossil is actually a Kappa that was trapped in the earth hundreds of years ago; it is revived when Kouichi washes the stone. When his family allows Kouichi to keep the Kappa, much to his bratty little sister’s annoyance, he affectionately names it Coo. But even though the Uehara family helps Coo regain his strength, and even battle him in an odd sumo match, Coo longs to find more of his kind. However, after following a few leads on where they may find more Kappas, Coo becomes the centre of a media storm, turning his life upside down. Will Coo ever be able to escape the constant hounding of the press, and can he find his place in this new world? 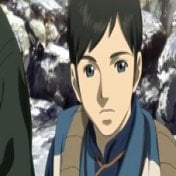 I suppose I went at Keiichi Hara backwards. I started with his most recent work, 2010's Colorful. That was what piqued my interest in his 2007 film Summer Days With Coo. And I haven't even dipped my toe into his large cache of Doraemon and Shin-Chan work.   The oversight is certainly mine. After watching Hara's two theatrical films I'm extremely impressed. He has a distinct voice - a spot-on grasp of family dynamics and a deft hand with sentiment. No youngster by anime standards at 52, Hara claims to have been influenced strongly by Miyazaki. But that's like an American animator saying he was influenced by Disney of a fantasist by Tolkien, and doesn't reveal much in and of itself.   Miyazaki's influence is more clearly felt in this movie than in Colorful, a movie I suspect the master would have found too morose for his tastes. But even with "Coo", Hara's work is less overtly targeted at families than most of Miyazaki's. "Coo" will deceive you with it's promotional art and synopsis. This is not a warm, wistful childhood fantasy - it's magical, yes, but full of loss, hurt and the dark effects of human ugliness.   The movie will scare off the younger kids immediately, with it's introductory scene of a kappa and his son facing human cruelty in the Edo period. When the story jumps forward to the 21st Century it's boy hero steps into the picture, elementary-schooler Kouichi (Takahiro Kokokawa). He finds what he thinks is a fossil by the riverbed, but it turns out to be a 200 year-old kappa boy in a state of suspended animation. When Kouichi gets it wet the little kappa springs to life in the voice of Kazato Tomizawa, who would go on to voice protagonist Makoto in "Colorful". Kouichi names the little kappa after the first sound he makes - "Coo".   Make no mistake, there are clever and amusing scenes between Coo and Kouichi and his family. His father is a bit of a dreamer and knows something of kappa mythology. Mom is a bit of a nag and a worrywart, but clearly the responsible and sober one of the parental pair. Little sister Hitomi is a flat-out brat, and jealous of Coo for stealing attention away from her. And there's a dog named Ossan who plays a bigger role than you think he will - he even has a backstory.   The best scenes in the film - as they often were in "Colorful" - are the simple ones of the family around the dinner table, or idling away in the living room, or squabbling over small things. This is clearly fertile ground for Hara, and he obviously - in contrast with Miyazaki - identifies with the boy of the house. The bond between Kouichi and Coo is immediate and heartfelt, and will go on to provide the spine of the film. It will help if you know a bit of kappa folklore going in, but it isn't really necessary - it's not hard to guess what sort of creatures they are based on Coo's behavior. I especially loved watching Coo sumo-wrestling with the family.   Even here the film has a dark side - as in "Colorful" Hara certainly understands ther cruelty young children are capable of inflicting upon in each other. In this case it's the unpopular girl in Kouichi's class, who he's just beginning the feel the stirrings of a crush on. The real darkness comes when the rest of the world intrudes on the secret world of Coo and the Uehara family, a kappa being a great curiosity in 21st Century Tokyo. Some of the themes of environmentalism and urban sprawl will be familiar, but they're treated with subtlety and real grit here. We also get some lovely bits of Japanese folklore interspersed throughout the film, some of which comes amidst a wonderful sequence when Kou takes Coo on a train trip to try and find others of his kind.   It's easy to see the passage of three years time in watching "Coo" and "Colorful" in succession. "Coo" lacks the fluid animation and lush backgrounds of Hara's more recent film, and the character designs are much simpler. Hara employs the photo-realistic technique less here as well, and all this results in a movie with less visual flair that doesn't make as much of a lasting impression. And in truth, "Colorful" is the better film. The story is tighter, the dialogue a little sharper and there's a degree of sophistication to the whole enterprise that exceeds this film.   But for all that, "Koo" exceeds expectations and succeeds on its own merits. Kokokawa and Tomizawa are excellent and authentic in the lead roles, creating an on-screen relationship that really works. There's a lot of genuine emotion here - more overtly sentimental than "Colorful" but not unacceptably so. The themes of parental loss, friendship and environmentalism are not fresh, but well-presented. Obviously this is the product of a director who cares deeply about his work - Hara understands the psychology of his characters and has something genuine and heartfelt to day in everything he does. He's damn good - too old perhaps to be yet another "next Miyazaki" - but we already have too many of those. I think a viewing of his two theatrical releases reveals one of the finest directors in anime today, and I look forward to seeing where he goes next.