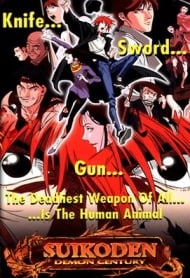 In the 21st century, an earthquake devastated Japan, destroying Tokyo and leaving its people homeless and lawless. In the present, the ruins of Tokyo are a haven for thugs and street gangs, the most powerful of which is the ruthless Koryukai gang. Takateru Suga is visiting Tokyo on a mission: to find his sister Kiyomi, but things heat up once he discovers she's been kidnapped by the Koryukai themselves! With the help of a transvestite, colonel-turned-monk and a lot of firepower, Takateru must help defeat the Koryukai and save the city, or lose everything he holds dear!

StoryFirst, I want to point out that this OVA has nothing to do with the Suikoden games. As someone who wanted to watch this specifically for that reason (to see if there was any relation), I'd recommend you keep that in mind when reading this review, and when deciding if you'll watch this. The Suikoden legend is based on a Chinese story that was ported over to Japanese beliefs as well, which deals with the 108 stars and such. If there is a direct corollation between this anime and the games, please let me know. Otherwise, unless I'm missing something huge, there are no related characters and nothing related of the sort to the games. Suikoden's actual plot is very convoluted and uninteresting, and becomes downright weird at the end. It takes place in a post apocalyptic looking place (as it has been leveled by an earthquake and all) overrun by thugs and gangs, and there is no law that can overcome them. Enter Takateru, a man who is looking desperately for his young sister who has been missing for some time. He comes to discover the worst gang of them all has kidnapped her, and thus, the story begins... Suikoden is nothing more than a hack n' slash violence fest, that isn't that violent in most parts, and isn't much more as far as depth. We see lots of explosions, punches, and fights (with crazy characters sometimes), but it never amounts to anything else, making it a very boring thing to watch. See Takateru. See Takateru beat up gang. End. Then, however, the OVA decided to get weird and throw in some demon related stuff in approximately 1-3 minutes of footage near the end. This not only made no sense, but also threw in a "wtf" element to a normally straightforward type plot (beat up bad guys). I keep wondering WHY they felt they needed to insert that. Was it because they knew it was already a substandard plot? If so, sorry guys, you managed to mess it up even more. AnimationThe animation of Suikoden is quite varied. Occasionally, there are redeemable parts such as interesting scenery (such as the ruined city and broken down buildings), and the violence was pretty funny, though not necessarily in a good way. The rest of the animation was fairly crude and simple, with jerky and stiff movements and a dark boring palette of colors. The character designs were fairly uninteresting, and comical looking at times due to strange proportions. SoundThe audio was very cheesy and 80s sounding, with saxaphone pieces and generally poppy tunes. It fit, that's for sure, but it was also very uninspiring. I have nothing special to say about the voice acting, or anything else related to the music. Slightly above average, but nothing special. CharactersThough an interesting cast of characters (such as the fighting transvestite and the priest who was once a colonel), they lacked depth and background. We know little to nothing about Takateru except that he knows how to kick ass and wants to save his sister. We see his sister occasionally, she's feisty but otherwise useless. The transvestite was probably my favorite, and the yakuza nun. In general though, this was a fighting/action OVA, not a plot-heavy beast, and thus, there wasn't much to the characters, or any development, really. There also are some weird characters that roll around near the end during the demon stuff, but they are fairly useless as well. OverallOverall, Suikoden was terribly average on just about every level. Fans of the games who are hoping to find something in this OVA will be sorely disappointed, as it isn't related. Fans of action or fighting will still be disappointed, since it didn't excel at either of these, as well. From the boring characters to the average animation, to the plot that seems concocted from a Mad Libs exercise, there's not much redeeming about Suikoden that pushes the bar higher than a 5. Watch it if you ... well, I can't think of a good reason to watch this, but hey, maybe you want to see rare things? 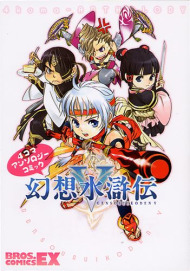