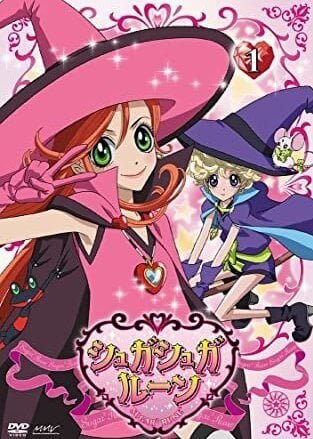 It is a bit difficult to review this anime because on the one hand, it has a nice story, but on the other, it takes forever to get to the actual plot. If you are in the mood for a girly, plot-less anime to drain your mind of the stresses of the real world- this anime is for you.

Before you decide there is no point to watching this, let me break things down for you. This anime might be a keeper for the right kind of audience.

The first half of the anime is very episodic. The two main characters, Chocolate and Vanilla, spend each day "collecting hearts" which in other words means, making boys fall in love with them as they compete to become the next queen of the magical world. Depending on how much a boy is in love with them, their hearts turn different colors. There is the yellow "pee" colored heart- which basically means,"you surprised me." Next is the orange heart, which is like a mild crush. Then the pink heart- which is the beginning of love, the red heart- which as you can imagine is total love. Not all hearts have to do with romantic love. For example there is the green heart of friendship, and of course the black heart of jealously/hatred, blah blah blah and so forth. Each of these hearts are worth so many "ecure" or points basically, which can be used to buy items from the magical world (you can imagine all the trouble these items get the girls (rather Chocolate) in) and are also used to determine who will be queen of the magical world- whoever has the most ecure at the end gets the throne. Shallow perhaps, but it is what it is.

In the second half of the anime, a plot actually starts to form and events of interest finally begin to take place. I'm happy to say that I pushed through to this point, because although predictable, the romance and battles between "good" and "evil" reveal themselves and make for an enjoyable, mind-numbing magical girl anime.

Nothing award-winning here, but for this particular type of anime, I wouldn't have expected any more or less. It was watchable.

Well, with a name like "Sugar Sugar Rune" you can't expect much in the way of inspiring soundtracks, and frankly the opening song was annoying. But, as stated, this was not unexpected for such an extreme shoujo anime.

One girl is assertive, the other is shy and gentle, but they are best friends. The main love interest is cold, but still has a good side somewhere deep inside of him. The mouse and frog familiars are more of a hindrance than a help, and the two magical guy friends are handsome and fun. What more could you ask for?

I am certain that the makers could have made this a really good anime, had they kept the plot throughout the entire anime, or rather just made it shorter. It has potential, they just didn't quite make it. If you watch until the end (and you like a good girly anime) you will be pleased I think with the ending result. However, if you don't want to sit around and watch a mostly plot-less anime please don't waste your time. This anime is good if you are willing to get to the end. Or...you could just skip to the second half and watch the good stuff.

This anime has such an amazing concept but was not fully utilized because of the slow progress and some random insertion of topics, but i like the idea that these queen candidates has to win the "people's heart" quite literally in order to be the next queen, and on their journey they realize the difference among hearts, such as the green ones for friendship. It's a show that you'd expect to be all girly but actually reflects life in it, it's not all Red hearts, there's a bunch of other colors for admiration and loyalty etc.

It's a good anime for the right audience

I'm a fan of the manga and I can't understand how the author is satisfied with this version. I think she's just being japanese-overly-polite.

This interpretation is a disgrace. It discards the entire central emotional plot of the manga and renders it all meaningless by changing the core rules of the world in which the story is set, removing any and all consequences to the characters actions.

The manga has numerous "OH SH*T" moments that completely change how you think about the characters, all of which are completely absent from the anime.

It has been reduced to trash and the manga is one of the greatest mahou-shoujo ever created, dealing with really heavy questions of morality, friendship, forgiveness and ethics. This anime made me cry in frustration and disgust.

It tries so hard to be Pretty Cure, which is such a misrepresentation and shallow farce of the original Sugar Sugar Rune that I just can't....

How to explain the core concept of Sugar Sugar Rune.  Let’s try an analogy, which, though they limp at times, can be good clean fun.  Let’s take those two venerable okey-doke holidays, St. Valentine’s Day and Halloween, and place them on opposite ends of a football field.  Nope, not far enough.  Let’s take twelve regulation NFL football fields and lay them end to end.  Or, maybe if we resort to soccer pitches (those additional metres can be crucial).  Wait, what you say?  The field of the Canadian Football League are 110 yards from goal line to goal line, and you can throw in the 30 yd. end zones on each end?  Dem’s da babies we need!  Line up twelve of those gridiron prairies end to end and place St. Valentine’s Day on one end and Halloween at the other.  Load them into high-powered projectile launchers and hurl them at each other, their velocity increasing to rates incalculable and horrifying, until at the point of impact …

the two holidays with their elements and traditions are melded together as they co-mingle and co-mangle, creating a spectacle where a devout expression as ‘Be My Valentine’ has all the sting and whimsy of ‘Trick or Treat!”  Where any proposal of love and affection becomes a bit tawdry and twisted.

That’s Sugar Sugar Rune … at least the first phase of the series.  That’s the analogy and, if it helps, fine and good.  If it doesn’t … well, let’s whup its butt and move on.

The two main characters of SSR are Chocolat Meilleure and Vanilla Mieux, two witches who are sent from the Magical World to the Human World to hone their magic skills and gather hearts.  Vanilla is a stunningly beautiful girl of blonde tresses, whose grace and charm are her most attractive traits, those gorgeous eyes and winsome smile, her soft-spoken nature and endearing shyness … odd, for some strange reason I’m become quite indifferent toward her.  Which is fine, since the true main character is Chocolat.  Both are candidates to become the next queen of La Royaume, a contest which previously matched Chocolat and Vanilla’s mothers, a contest won by Vanilla’s mom.  It is Chocolat’s goal to win this contest for her mother who had disappeared shortly after that Queen’s Exam and is assumed dead.

The rules of the first phase are simple … to gather hearts of any boy who becomes enamored of either girl.  In the Magical World, Chocolat’s brash and aggressive nature would make her alluring in the Magical World, a realm of show-offs and megalomaniacs.  But, in the Human World, Vanilla’s shy and demure personality makes her the hottie who can bring up all the various emotions of puppy love.  That of arousal (the girl as ‘eye candy,’ easy for Chocolat to gain) which creates a yellow heart (a cheap level of love, called ‘pee-colored’).  That of crush (I like the girl, but I can’t bring myself to tell her) which creates an orange heart.  The pink heart (confessed love, something the human boys are hesitant to do) the first level of real ecure value.  The red heart (true love) which are rare, and when found, something you can base a life of love in a relationship.  The more hearts of winning shades will mean much in the selection of the next queen.  Along with this Crayola-consciousness is the green heart (friendship), the rainbow-heart (respect from your fellow girls), and most important white (pure love) and noir (the feelings of envy, jealousy, hatred, or what one might call anti-love).  All these will build into the plot which will develop slowly … too slowly.

Assisting Chocolat and Vanilla are their guardian Rockin’ Robin (a heart-throb among the women in his society), their protecting knights Houx and Saule (two boys from the Magical World who are warm friends with Chocolat), and the girls’ familiars (life-coaches you might say).  Vanilla’s is a mouse named Blanca and Chocolat’s is a frog named Duke.  Hmm, I wonder if this has anything to do with an ancient Greek mock epic called The Battle of the Frogs and Mice.  A nice little poem of death and mayhem which little Spartan boys read before they moved on to the hard stuff like the Iliad, before they grew up to whup Persian and Athenian butt.  Anyway, Blanca is pushy and assertive, looking to advance Vanilla’s cause, however.  Duke is a slacker with no redeeming qualities other than an odd scene at a witches’ ball where a valiant unknown warlock sweeps in to save Chocolat’s life, ribbiting all the way.

I agreed with LadyFate’s review where she said that it was difficult to get into the mindless plot.  If the storyline continued with this heart gathering adventure, SSR would have been nothing but a farce.  But there are elements of the series which save the day.  You see, the key rule is each girl must gather the hearts of boys who become twitter pated with them, a spell which would leave the boy dazed, confused, but not necessarily harmed (hey! could that have happened a few paragraphs ago?).  Ecure points could be gathered cheaply, which cheapens the plot.  But … a queen candidate is not to give her heart away, or else death … game over.  This makes the character of Pierre interesting.  It is not hard to call him the villain, and then maybe you shouldn’t.  Pierre tries to seduce Chocolat and claim her heart.  And, when Chocolat learns to avoid Pierre’s advances (yeah, sure!), Pierre works to make Vanilla the Ogre Queen.  And the case of the Ogres, you don’t know if they are truly evil or perhaps a nation disadvantaged and demonized by the patrons of La Royaume.

There are elements of the plot that are predictable, as the link between a black cat and Chocolat’s mother Cinnamon.  As the first meeting of a very young Chocolat and Pierre.  The Ogre strategies are obvious.  They hate La Royaume and wish its destruction.  But there are parts of the story that sweep away the notion of predictability.  As the ending.  Which girl becomes the next queen, Chocolat or Vanilla?  Both bear traits that make them ideal queens.  You think one will win, but the other wins, but …

I'm in love with the characters and the story is interesting to all but it takes so long to get to the good parts(plot) but great anime to watch if you're realllyy patient.