Chocolat is an extrovert and an assertive girl, while her friend Vanilla is extremely shy and hesitant; together, they both come from the Magical Kingdom and are the next candidates in line for the throne. In order to qualify to be the Queen, Chocolat and Vanilla are sent to the Human World to improve their magic; the assessment is based on capturing the most 'hearts' of the people in the Human World. Chocolat's upfront behavior was popular in the Magical Kingdom, but in the Human World, people prefer the personality of her newly formed rival, Vanilla. Now, Chocolat must work extra hard to live up to her mother's failure -- all while repressing her desire to whup everyone's butt!

It is a bit difficult to review this anime because on the one hand, it has a nice story, but on the other, it takes forever to get to the actual plot. If you are in the mood for a girly, plot-less anime to drain your mind of the stresses of the real world- this anime is for you. Before you decide there is no point to watching this, let me break things down for you. This anime might be a keeper for the right kind of audience. Story The first half of the anime is very episodic. The two main characters, Chocolate and Vanilla, spend each day "collecting hearts" which in other words means, making boys fall in love with them as they compete to become the next queen of the magical world. Depending on how much a boy is in love with them, their hearts turn different colors. There is the yellow "pee" colored heart- which basically means,"you surprised me." Next is the orange heart, which is like a mild crush. Then the pink heart- which is the beginning of love, the red heart- which as you can imagine is total love. Not all hearts have to do with romantic love. For example there is the green heart of friendship, and of course the black heart of jealously/hatred, blah blah blah and so forth. Each of these hearts are worth so many "ecure" or points basically, which can be used to buy items from the magical world (you can imagine all the trouble these items get the girls (rather Chocolate) in) and are also used to determine who will be queen of the magical world- whoever has the most ecure at the end gets the throne. Shallow perhaps, but it is what it is. In the second half of the anime, a plot actually starts to form and events of interest finally begin to take place. I'm happy to say that I pushed through to this point, because although predictable, the romance and battles between "good" and "evil" reveal themselves and make for an enjoyable, mind-numbing magical girl anime. Animation Nothing award-winning here, but for this particular type of anime, I wouldn't have expected any more or less. It was watchable. Sound Well, with a name like "Sugar Sugar Rune" you can't expect much in the way of inspiring soundtracks, and frankly the opening song was annoying. But, as stated, this was not unexpected for such an extreme shoujo anime. Characters One girl is assertive, the other is shy and gentle, but they are best friends. The main love interest is cold, but still has a good side somewhere deep inside of him. The mouse and frog familiars are more of a hindrance than a help, and the two magical guy friends are handsome and fun. What more could you ask for? Overall I am certain that the makers could have made this a really good anime, had they kept the plot throughout the entire anime, or rather just made it shorter. It has potential, they just didn't quite make it. If you watch until the end (and you like a good girly anime) you will be pleased I think with the ending result. However, if you don't want to sit around and watch a mostly plot-less anime please don't waste your time. This anime is good if you are willing to get to the end. Or...you could just skip to the second half and watch the good stuff.

I'm a fan of the manga and I can't understand how the author is satisfied with this version. I think she's just being japanese-overly-polite. This interpretation is a disgrace. It discards the entire central emotional plot of the manga and renders it all meaningless by changing the core rules of the world in which the story is set, removing any and all consequences to the characters actions. The manga has numerous "OH SH*T" moments that completely change how you think about the characters, all of which are completely absent from the anime. It has been reduced to trash and the manga is one of the greatest mahou-shoujo ever created, dealing with really heavy questions of morality, friendship, forgiveness and ethics. This anime made me cry in frustration and disgust. It tries so hard to be Pretty Cure, which is such a misrepresentation and shallow farce of the original Sugar Sugar Rune that I just can't.... :'(

This anime has such an amazing concept but was not fully utilized because of the slow progress and some random insertion of topics, but i like the idea that these queen candidates has to win the "people's heart" quite literally in order to be the next queen, and on their journey they realize the difference among hearts, such as the green ones for friendship. It's a show that you'd expect to be all girly but actually reflects life in it, it's not all Red hearts, there's a bunch of other colors for admiration and loyalty etc.It's a good anime for the right audience 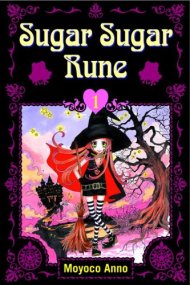